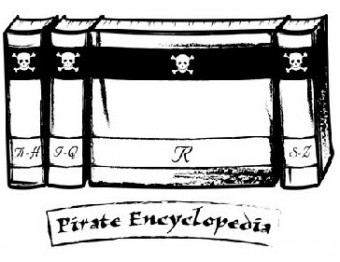 Avast: meaning “stop” or “hold still.” The word was originally derived from the Dutch phrase “houd vast,” which literally means “hold fast.”  The frequent usage of this phrase eventually got it slurred down to “hou’ vast” and later “avast.” This became a common term among sea-folk around the late 17th century.

Coxswain: a boy servant (swain) in charge of a small cock. The cock was a small boat used to transport the captain to and from the ship.  This term has its origins all the way back in the 15th century.  It has since been replaced with “helmsman,” though “helmsman” can also refer to the person currently in charge of controlling the actual ship itself.

Scuttlebutt: a cask of drinking water aboard a ship.  A “butt” being the wooden cask and “scuttle” being the act of drilling a hole in the butt.  Sailors would often gossip while they drank by the scuttlebutt. This has since led to the term becoming synonymous with “gossip” and “rumors.”

Duffle: the name of sailor’s personal effects along with the bag that carries them.  The term comes from the Flemish town “Duffel,” which popularly produced the rough woolen cloth these bags were often made of.

Bilge rat: a rat that lives in the worst place on the ship, namely the bilge.  The bilge is the lowest level of the ship and is loaded with ballast and often foul smelling water/muck.  Thus, a bilge rate is a stinking, muck covered rat.

Bung hole: as mentioned before, a cask was called a “butt”; a hole in the butt is then stoppered with a bung and thus is called a “bung hole.”

Arrrrrr:  This classic vociferation that’s a staple of pirate-speak in movies isn’t actually historically based, but rather is a Hollywood invention, particularly being popularized in a 1950s version of Treasure Island, which pretty much set the standard for the modern conception of how to speak like a pirate. In the movie, actor Robert Newton played a particularly memorable pirate character, Long John Silver. He later popularly reprised the role in sequels and on TV.  His accent on the films featured a very strong rolling of the R’s, which is thought to be how this popularly worked its way into pirate-speak.

Grog: typically rum diluted with water, but can also be used to refer to any alcoholic beverage other than beer. Grog was common aboard ships due to the fact that the drinking water aboard vessels often got pretty slimy and disgusting.  Thus, a little rum was mixed in to kill the putrid flavor.  Before grog, sailors typically drank water mixed with beer or wine to improve the taste.

As rum became popular in the 17th and 18th centuries, it began being substituted for the beer or wine ration. Due to rum being significantly stronger than beer or wine, sailors tended to get drunk from it, particularly when not diluting it with water, as they were supposed to.  As one might expect, this caused problems aboard the ships.

In order to solve this problem, British Vice Admiral Edward Vernon began requiring that the rum be mixed with water before giving it out to the sailors as part of their rations.  This order originally went out on August 21, 1740 with the precise mixture being two quarts of water with one pint of rum, distributed twice daily under the close scrutiny of the Lieutenant of the Watch.

Admiral Vernon also added lime to the mixture to sweeten it, something which wasn’t initially adopted on all navy ships.  However, soon after James Lind proved that scurvy could be prevented simply by giving sailors citrus fruit in 1747, the practice of adding lime or lemon juice to the mixture became popular throughout the Royal  Navy. This all brings us back to the origin of the name “Grog”, which is thought to be named in honor of Vice Admiral Vernon.  The Admiral’s nickname was “Old Grog” due to the grogram cloak he wore.  Grogram was just a course fabric, usually made from a blend of wool, silk, and mohair, and tended to be stiffened and made waterproof with gum.

“Your true colors”: ships would often carry flags from many nations so that they could deceive nearby vessels into thinking they were allies.  The rules of engagement, however, required that all ships hoist their true nation’s colors before firing upon someone.  Thus, it was common to hoist an enemy ship’s colors and hail them; once near, show your true colors and fire upon them.

Keel hauling: a punishment aboard ships where the person being punished has weights attached to their legs and is then attached to a rope, which also runs under the ship.  The person is then hoisted up and dropped in the water.  The rope is then pulled to the other side of the ship so that the person goes under the ship, before ultimately being pulled out (assuming they remain attached to that rope and don’t ultimately sink due to the weights on their legs).  They are then given the chance to catch their breath, before this is repeated.  This isn’t supposed to be fatal, but accidents did happen, which made it all the more terrifying to the condemned.  It was also common to fire a cannon while the person being punished was under water, to further scare them (sounds like loud thunder under the water).  The Dutch were the first to use this as a common punishment, but it was later adopted with pirates and other navies of the world in the 15th and 16th centuries.