The World’s Strongest Animal is the Copepod 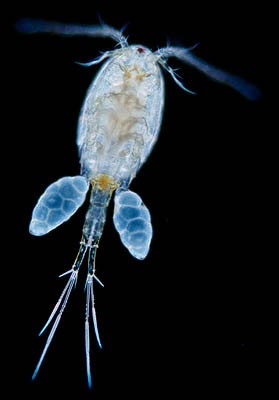 Today I found out the world’s strongest animal is the copepod.

Relative to their size, typically about 1mm long, copepods are also the world’s fastest animal, being able to jump at a rate of about a half a meter per second.  Their incredible strength, relative to their size, makes them over ten times stronger than any other known species on the planet and even stronger than any mechanical motor produced to date.

In order to achieve these great jumps, used to evade predators, the copepod uses two propulsion mechanisms and a very fast nervous system, which is very rare for invertebrates; they also have uniquely designed neural pathways with neurons surrounded by myelin, which increase the conduction speed.  When they detect a predator, a signal is rapidly sent to their legs and set of antennae, which together causes them to jump with a ridiculous amount of force, relative to their size.

For perspective on just how much thrust power these little guys have, if you were able to jump with similar power behind your thrust or more aptly, scaled up the size vs distance/time unit traveled, you would be able to jump about half a mile in one second flat in water.  In air, which has significantly less drag, you’d jump much further than that.

All this would of course depend greatly on the density of the water, drag, velocity, density of the base from which you were jumping from, etc., so it’s not simply a 1-1 correspondence that you can scale up like that.  However,  just for a fun ballpark estimate, assuming similar aerodynamics to the copepod, a relatively solid base to thrust from, and water density of around 1000kg/m^3 (typical salt water) vs air density of around 1.275 kg/m^3 (typical sea level), in air, you’d be jumping about 6-12 miles per second, if you had that kind of strength in proportion to your size that the copepod has.