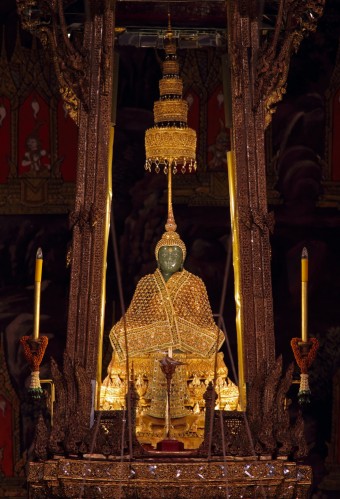 Today I found out that the  Swastika in Buddhism represents universal harmony, dharma, the balance of opposites, and, originally, eternity and good luck or “all is well”.

Now of course in the western world the Swastika has a pretty bad reputation thanks to a certain German tree hugging vegetarian and his political party.  However, Hitler and his crazy gang weren’t the first to use this ubiquitous symbol prominently.  In fact, the first known record of this symbol popping up was over 5000 years ago.

Interestingly, this symbol doesn’t seem to originate in any one place in the world, though the earliest known artifacts containing this symbol were Hindu.   But independent of Hinduism and apparently independent of the usage in Hinduism, this symbol popped up pretty much all over the world in just about every culture.  From the Navajo Indians, to the Celts, the Jews, the Christians, the ancient Greek and Romans, etc; almost every major society through history has used this symbol prominently for one reason or another.

How is this possible?  Some of it can be explained by cultural diffusion, however that doesn’t explain how it might have happened in every case.  Some theorize that the swastika shape would necessarily be something any society that weaves baskets would be familiar with as, when weaving baskets, this basic shape is readily apparent.  This seems plausible, but would not explain how the symbol always seemed to rise to a symbol of great importance and meaning in most historic cultures.

An alternative possible origin towards this end was put forth by Carl Sagan.  He noted that, when studying an ancient Chinese text with drawn comet tails, some of the depictions showed comets with a tail that has four bent arms.  He theorizes that in antiquity a comet could have approached so close to the Earth that the jets of gas streaming from it, bent by the comet’s rotation, became visible, making the swastika shape and thus leading to the adoption of the swastika as a symbol of importance across the world.

So why did the Nazi’s use the swastika on their flag?  Well Heinrich Schliemann, who discovered the symbol in the site of ancient Troy, theorized that it was a symbol of great ancient religious importance to his Germanic ancestors.  Basing it on the fact that this symbol was found often on ancient Germanic pottery and thus must have somehow migrated down to his present archeological site.  Obviously, given we know now that this symbol was prominent in most cultures throughout history, the part of this theory thinking the symbol originated in Germany was dead wrong.  The work of Schliemann eventually intertwined with the völkisch movements; with the swastika being a symbol of the “Aryan race”, a concept that came to be equated with a Nordic master race originating in northern Europe.

Hitler thus was familiar with the symbol from thinking it was an ancient symbol of an ancient Germanic master race.   He was also familiar with it as a boy at the Benedictine choir school at Lambach Abbey, Upper Austria, which Hitler attended when a child.  The school had a swastika chiseled into the monastery portal and also the wall above the spring grotto in the courtyard.

When Hitler created a flag for the Nazi Party, he sought to incorporate both the swastika and “those revered colors expressive of our homage to the glorious past and which once brought so much honor to the German nation.”; red, white, and black being the colors of the flag of the old German Empire. He also stated: “As National Socialists, we see our program in our flag. In red, we see the social idea of the movement; in white, the nationalistic idea; in the swastika, the mission of the struggle for the victory of the Aryan man, and, by the same token, the victory of the idea of creative work.”

Way to ruin an ubiquitous 5000 year old symbol cherished by practically every culture through history Hitler.