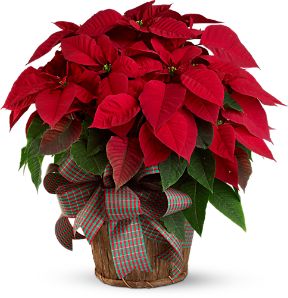 Today I found out that poinsettias are not poisonous, contrary to popular belief.

The belief that they are poisonous originally seems to have started around 1919 when a two year old child of a U.S. Army officer died after supposedly eating poinsettia leaves.  The poinsettia leaves were blamed for the death, even though there was never any actual evidence that the poinsettia leaves had anything to do with the child dying, according to The American Society of Florists, who looked into the matter at the time.

Since then there hasn’t been any other deaths related to ingesting poinsettia leaves.  Indeed, according to the Madison Poison Control Center a 50 pounds child would need to eat 500-600 poinsettia leaves to suffer any sort of serious ill effects from the plant and even then it is likely that the child would only suffer possible cramps, upset stomach, vomiting and/or diarrhea, but would otherwise not need any medical attention.

Further research into this matter was done by the Children’s Hospital of Pittsburgh and Carnegie Melon University, studying just under 23,000 poinsettia related reports to poison control centers across the United States.  Not a single one of these reports showed evidence of any actual toxicity from exposure or ingestion of the plant.