The Curious Case of the Solar Powered Sea-Slug 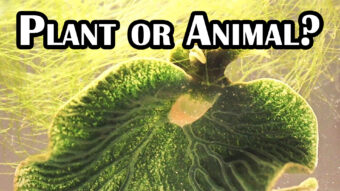 Kingdom, Phylum, Class, Order, Family, Genus, Species. First conceived by Swedish botanist Carl Linnaeus in 1735, this system for classifying life on earth, known as Linnaean Taxonomy, has been in use for nearly 300 years and is taught in every high school biology class. In recent years, however, a better understanding of genetics and evolution has resulted in Linnaean Taxonomy being largely replaced by a system known as Cladistics, which is based on organisms’ evolutionary ancestry rather than just physical characteristics. Nonetheless, many truths of the old system still hold true in the new. For example, the six Kingdoms of life – the second-highest classification level – are generally considered to be entirely separate, with no interbreeding or genetic transfer being possible between them. In other words, animals are animals, plants are plants, fungi are fungi, protists are protists, bacteria are bacteria, and archaea are archaea – and never the twain shall meet. Yet one organism seems not to have gotten the memo, and appears to have achieved a level of plant-animal symbiosis previously thought impossible. This is the strange story of the solar-powered sea slug.

Elysia chlorotica is an unassuming-looking creature. Native to the tide pools and salt marshes of the American east coast, this sea slug rarely grows more than 2 inches long, its flat, bright green body making it look like a tiny swimming leaf. But its small size and nondescript appearance belie an extraordinary ability. E. chlorotica feeds exclusively on Vaucheria litorea, a single-celled algae, using its sharp radula or tongue to puncture the algae’s cell wall and suck out its cytoplasm and organelles. But unlike other organisms, the slug doesn’t just digest its meal and call it a day. Instead E. chlorotica saves the algae’s chloroplasts, the tiny organelles responsible for carrying out photosynthesis, and stores them inside special cells lining its extensive, branching gut. Here, the chloroplasts remain active for up to a year, carrying on with their original task of converting sunlight into sugar. In this manner the slug can survive for months without eating, deriving all its energy from photosynthesis just like a plant.

Since its discovery in the 1970s, the “solar-powered sea slug” has amazed and baffled biologists. Not only is its ability to incorporate foreign cell parts into itself shared by only a handful of other organisms, but by all known rules of biology this process – known as kleptoplasty – shouldn’t even be possible. In order to carry out photosynthesis, chloroplasts require some 3,500 different proteins, including enzymes needed to repair damage caused by exposure to sunlight. 10% of these proteins can be made by the chloroplast itself using its own supply of DNA – a holdover from the distant past when chloroplasts were independent organisms, absorbed by other cells and hijacked to supply their hosts with energy. The other 90% of the required proteins, however, must be supplied by the host cell’s nucleus – which the slug digests and discards. Thus, the chloroplasts shouldn’t be able to function inside the slug’s cells – and yet somehow they do. Other mysteries abound. For example, scientists don’t know how E. chlorotica manages to digest the rest of the algae cells but not the chloroplasts, or why the slug’s immune system doesn’t react to the presence of foreign DNA. Furthermore, photosynthesis produces dangerous charged atoms called oxygen free radicals at levels animal cells shouldn’t be able to survive.

One leading theory as to how E. chlorotica accomplishes all this involves horizontal gene transfer. According to this theory, the slug extracts DNA from V. Litorea’ cell nucleus and incorporates it into its own genome, allowing it to produce all the proteins needed to keep its stolen chloroplasts functioning. While horizontal gene transfer is common among bacteria – being, for example, the main mechanism behind antibiotic resistance – it is almost unheard of in plants and animals. The incorporation of plant genetic material into an animal genome would be unprecedented. Yet when a team from the University of Maine analyzed E. chlorotica’s genome in 2008, it discovered a gene called psbO that codes for a vital photosynthetic protein – a gene identical to one found in the V. Litorea prey algae. Further research by a team from Rutgers university discovered genes that the slug uses to suppress its immune system and neutralize dangerous free radicals, allowing it to keep its stolen chloroplasts operating for months on end.

Yet, as is often the case in biology, things aren’t nearly as clear-cut as they might seem. A 2013 study by the same Rutgers team that discovered the immunosuppressing genes failed to find any evidence in E. chlorotica’s genome of the other 3,000-plus genes needed to maintain photosynthesis. Subsequent studies also failed to find the required genes, casting doubt on the theory that E. chlorotica maintains its chloroplasts using stolen algae genes. This discovery in turn lead other researchers to reevaluate other assumptions about this unusual creature – including the notion that it is solar-powered at all. In 2014, graduate student Gregor Christa at the University of Bonn divided slugs into two groups – one exposed to sunlight, the other kept in darkness – deprived them of food, and  monitored their weight loss over the course of several weeks. To his surprise, the two groups lost weight at around the same rate, the light-exposed slugs showing little sign that they were surviving on photosynthesis. Experiments on related species P. ocellatus and E. timide carried out by Sven Gould at Heinrich-Heine University in Dusseldorf yielded similar results, with the slugs surviving up to 88 days in complete darkness. Christa and Gould also observed that the slugs grew increasingly paler and brownish-yellow in yellow as they starved, indicating that they were digesting their stored chloroplasts.

To Christa and Gould, these experiments suggest that the amazing “solar-powered slug” isn’t actually solar-powered at all:

“We know that we were hitting a wasp’s nest. It’s like covering a beautiful piece of sushi in wasabi—it becomes hard to digest and swallow.”

Instead, they suggest, the chloroplasts are simply a form of emergency energy reserve, the organelles being rich in proteins, fats, and sugars. This would account for the lack of photosynthetic proteins in the slug’s genome and the fact that the slugs starve at the same rate in light or darkness. Furthermore, according to Gould:

“In winter, E.chlorotica digs itself into the mud and survives for months. If it’s in the mud, how does it get enough light? We need to check this. Maybe we’ll be surprised and they really do die, but I doubt it.”

However, not everyone is ready to give up on E. chlorotica just yet. According to biology professor Sydney Pierce of the University of Florida:

“The notion of the slugs storing chloroplasts as some sort of a food hoard seems a bit gratuitous. The plastids are only in a relatively few cells and would not seem to be much of an energy source on their own. If their [Christa and Gould’s] results are correct, they are very likely just species differences and the authors may be over-generalizing.”

Indeed, even if E. chlorotica is not carrying out full photosynthesis, it is clear that it is doing something with its stolen chloroplasts besides simply storing them as emergency food. In a 2014 study, Gregor Christa discovered that the slug is able to “fix” CO2 – that is, convert it into organic compounds – 23 times faster when exposed to light than in darkness. Furthermore, in addition to producing sugar from sunlight, chloroplasts carry out a number of other metabolic functions including generating fatty acids, amino acids, and iron-sulfur clusters. Thus, E. chlorotica’s stolen chloroplasts likely give it at least a small metabolic advantage – and in nature, even a small advantage can mean the difference between life and death.

Many mysteries still surround this unusual organism – mysteries made all the harder to answer by the creature’s elusiveness. Already difficult to find on account of its shy nature and natural camouflage, E. chlorotica is becoming increasingly scarce as climate change and human development continue to erode its delicate habitat. And even when researchers manage to capture a specimen, the slugs are extremely difficult to raise and breed in captivity – not least because they consume their preferred food, the algae V. litoria, far faster than it can be grown in a lab. So this bizarre plant-animal hybrid will likely hold on to its secrets for a little while longer, a unique reminder that, in the words of Jeff Goldblum in Jurassic Park, “life finds a way.”