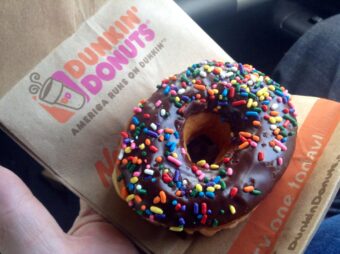 In 1847 at the tender age of 16, seaman Hanson Gregory looked at some frying dough and said, “Everything is better with holes”… except his ship hull probably… and created the staple of breakfasts the diabetes lovin’ world over- the doughnut! Or so the story goes anyway. In truth, Captain Gregory’s account of how and why he supposedly invented the doughnut varied over time, and despite a statue being made of him in Rockport, Maine in 1947 commemorating his fried genius, nobody really knows where the holed doughnut came from. Some, including Captain Gregory, claim putting the hole in it makes it so you don’t get a mouthful of grease when you eat the center, but plenty of doughnuts exist that have no holes with no such issue. And people have been frying up such cakes for millennia with no apparent inclination to take the center out, except for occasionally to replace it with things like fruit and other fillings.

Nevertheless, it was in the late 19th and early 20th century that suddenly many decided a hole should be present in such fried dough. As to why, the timing of the change gives arguably the best hypothesis, or at least potentially why it became popular. Around the same time doughnuts with holes first popped up in New York City, bagels were also becoming very popular in the same place and were commonly put on display and sold stacked on wooden dowels. Thus, it is sometimes hypothesized that bakers in New York first got the bright idea to put holes in the dough before frying when one or more of them thought to sell the doughnuts in the same way as bagels- on dowels, which saved display space and, perhaps more significantly, made it easier to sell en masse on street corners. With this hypothesis, making more evenly fried dough may or may not have come into play.

Whatever the case, this holey fried dough rapidly gained in popularity in the early 20th century, particularly receiving a huge boost thanks to WWI and soldiers’ love of them in the trenches.

Well, that’s because he later realized that was a horrible name for his company and, after a brainstorming session with his employees, rebranded. Here now is the story of Massachusetts native William Rosenberg, and how he went from dropping out of school in the 8th grade to creating the multi billion dollar behemoth- Dunkin’ Donuts.

Born on June 10, 1916 in Boston, Massachusetts to Jewish immigrants Nathan and Phoebe Rosenberg, at the age of 13 William Rosenberg decided academic pursuits were far less appealing when there was no food on the table. You see, at the time, his father’s grocery store became one of many causalities of the Great Depression. Needing to help support his family, the newly minted teen entered the work force taking a variety of jobs in the ensuing years- everything from shining shoes to snow shoveling. He even on particularly hot days would buy blocks of ice and sell ice chips at the racetracks. But things really began looking up for the young entrepreneur when, at the age of 14, he landed a full time gig as a message runner for Western Union, with his starting wages reportedly approximately $95 a month (about $1500 today) plus tips. A few years later, at the age of 17, he switched to working for Jack and Jill Ice Cream, initially as a delivery boy, but, within a decade, rising all the way up to National Sales Manager at the company.

When WWII hit, he switched from ice cream to something decidedly less easy on the digestive system- steel, working for the Bethlehem Steel Company, reportedly learning the trade of an electrician during his time with them, as well as climbing up the Union ladder as a union representative. It was here that his life was changed forever when he observed how well the various mobile food service companies did selling their edible wares to the workers during breaks. He also saw many ways their distribution methods could be improved.

Combining this with his previous experience with Jack and Jill selling their wares from trucks, after the war, he decided to start his own mobile restaurant company. Using $1500 (about $23,000 today) in war bonds he held, and borrowing another few thousand dollars from friends and family, in 1946 he founded Industrial Luncheon Services in Quincy, Massachusetts, initially purchasing and converting used phone company trucks and taxicabs to sell food from at various Boston area factories. As for these vehicles, he heavily modified them to be more suited for their new role as food trucks, with stainless steel shelving integrated to their sides and thin metal doors that would swing up as awnings to protect the food and customers from the elements while they made their purchases.

The food truck concept was a major hit and within three years, he’d expanded his mobile empire to over 200 vehicles, countless vending machines, and even some in-plant cafeterias- all serving various factories and major work locations across multiple states.

It was at this point it became apparent to Rosenberg that his bread and butter product was, in fact, bread based- the humble doughnut. He also observed people’s choice beverage to have with the sweet treat was, unsurprisingly, almost always something decidedly bitter- coffee. In fact, despite offering a variety of snack and beverage options, these two items alone accounted for almost half of the revenues of his company.

Teaming up with his brother-in-law and former mentor at Jack and Jill, Harry Winokur, the 32 year old Rosenberg then decided to open a decidedly wheelless location which would specialize in selling these two staple products. And so it was that The Open Kettle opened its doors in 1948 at 543 Southern Artery, Quincy, Massachusetts, with the location still in operation to this day, though under the updated name.

As with his previous business ventures, this new location was a hit, in the first week alone selling over 24,000 doughnuts at 5 cents apiece (57 cents today), and expansion was soon in the air using the basic model perfected in the single location- namely, offering a massive number of doughnut options, originally 52 types, which was a number unheard of in almost any other doughnut outlet at the time. Further, Rosenberg insisted on extreme high quality in both the coffee sold at the location and the doughnuts, with the former achieved by using more expensive beans than most of their competitors, and the latter assured by enacting a rule that any doughnut that sat for more than 5 hours on the shelf must be thrown out.

Ultimately happy with the product and perfected model in the store, Rosenberg was, however, not happy with the name of the business and felt they’d sell a lot more doughnuts and coffee under a better brand name. Thus, sitting down with various employees in 1950, they set about fixing the issue with a brainstorming session. Ultimately the company’s architect, Bernard Healy, was deemed to have come up with the best suggestion- Dunkin’ Donuts. This highlighted both that their major product was doughnuts and alluded to the coffee one could dunk them in.

On this note, Rosenberg would regularly state that the key to his success in business was not in his own intelligence and ideas, but rather his talent for hiring people who were far smarter and more qualified than himself, and then simply listening to them. And as for his own contributions, he famously stated he was “too dumb to make things complicated.” Further elaborating on his whole philosophy of management, he stated, “A person does not build a business; a person builds an organization. An organization builds a business.”

And as for that organization, he notes, “In unity there is strength. Consider the fragile snowflake that flutters slowly to earth and disintegrates; however, if enough of them stick together they can paralyze an entire city.”

Speaking of unity, in an age before McDonald’s and other such franchise behemoths, inspired by another Quincy Massachusetts company, Howard Johnson’s, Rosenberg had the idea to expand his little business via the then very controversial and legally embattled concept of franchising.

His business partner and brother in law, Harry Winokur, did not agree and subsequently left Dunkin’ Donuts, creating one of the world’s other extremely successful doughnut businesses, Mister Donut, which would go on to become the second largest doughnut company in the United States when Winokur realized the error of his ways and began franchising it out. If you’re now wondering why you may not have heard of Mister Donut- unless you live in Japan that is- this is simply because a parent company ultimately purchased both companies and gave the Mister Donut locations the option to switch to Dunkin’ Donuts, which almost all did, combining the companies and bringing things full circle.

In any event, further seeing the need for an organization to protect the interests of franchises- particularly needed at a time when some regions considered franchising, if not literally illegal, at the least disreputable- in 1960, Rosenberg on the side founded the International Franchise Association, which today represents over 1,400 brands and some 30,000 franchises.

Unfortunately for Rosenberg, 11 years later in 1971 a bout with lung cancer had him needing to step down as chairmen of the board of Dunkin’ Donuts, though this wasn’t a major issue as he’d previously already given over most of the day to day operations to his son, Robert, naming him president of the company in 1963.

However, not content to just sit around doing nothing, after his brush with cancerous death, he proceeded to spend his time focusing on horse breeding at his Wilrose Farms, ultimately becoming the largest standard bred breeder in all of New England. By 1979, his exploits with horses even landed him in the New England Hall of Fame of the Standardbred Industry, despite previously having no experience in any of this. As with his doughnut empire, he gave the credit for this not to his own knowledge or ideas, noting he knew little about horses in the beginning, but simply stating all the credit should go to the talented people he hired and subsequently learned from.

Shortly after his induction into the breeding Hall of Fame, in 1980, after a bout with cancer of the blood, he donated Wilrose Farms to the University of New Hampshire. And, after this, philanthropy became his focus, unsurprisingly focusing on cancer and diabetes.

About a decade after this, Dunkin’ Donuts was sold to Allied Lyons. As for Rosenberg, while having little to do with the company after this and no longer even regularly partaking in the doughnut side of this business owing to issues with his weight and diabetes, Rosenberg still remained something of a brand ambassador for the company until his death at the age of 86 on September 22, 2002 of bladder cancer.

As for how he went so far in life despite such humble origins and an almost complete lack of formal education, beyond noting his habit of surrounding himself with people more talented and knowledgeable than he, Rosenberg summed up, “There are two ways to get to the top of an oak tree. You can sit on an acorn and wait for it to grow, or you can climb the tree.”