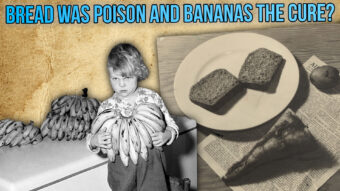 In the winter of 1944-45, the people of the Netherlands teetered on the brink of starvation. As the Allied advance through the south stalled in wake the ill-conceived Operation Market Garden, the Dutch Government in Exile ordered a nationwide railway strike in an attempt to cripple the occupying German Army. In retaliation, the Nazis cut off food shipments to the major cities in the west. In Amsterdam, Rotterdam, and the Hague, supplies of food and fuel rapidly dwindled, forcing citizens to survive on as little as 580 calories a day. In desperation, many turned to eating sugar beets and tulip bulbs, the latter of which had almost zero nutritional value and were potentially poisonous. Making matters worse, the winter of 44-45 was one of the coldest on record, causing canals to freeze over and making transport of supplies almost impossible. By the time the Allied air forces began making food drops in the spring of 1945, the so-called “Hunger Winter” had claimed the lives of over 18,000 Dutch citizens. Curiously, however, one group of children in a Hague hospital appeared unaffected by the famine. In fact, they seemed to thrive in spite of it. This strange case would lead one doctor to solve a mystery which had baffled medical science for nearly 2,000 years.

In the year 100 C.E, the Greek physician Aretaeus of Cappadocia first described a rare illness which mostly seemed to afflict children. Its victims suffered from weakness, abdominal pain, copious foul-smelling diarrhea, and chronic wasting, often dying of starvation and malnutrition regardless of how much food they consumed. Aretaeus named the baffling condition “coeliac disease” after the Greek word koiliakos, meaning “abdomen.” Over the following two millennia the disease would come to be known by many names, including Chronic Intestinal Indigestion, Intestinal Infantilism, Gee-Herter’s Disease, Coeliac Diathesis, Celiac Sprue, or simply Sprue. But the cause – and treatment – remained as mysterious as ever. Researchers in the late 19th Century ruled out a bacteriological cause, for the syndrome affected children from all socioeconomic backgrounds and living conditions. Indeed, it seemed to affect wealthier children more, though some doctors theorized that poorer children simply died before a diagnosis could be made. Whatever the case, it was eventually concluded that any potentially viable treatment for coeliac disease would involve a combination of rest and diet.

The first doctor to give a modern description of coeliac disease was British paediatrician Samuel Gee of London’s Hospital for Sick Children in 1887. Gee theorized that the disease was caused by an overabundance of dairy and starch, and recommended that sufferers adopt a diet of raw meat, mussels, and toast while avoiding milk, rice, fruit, and vegetables. In 1908, American physician Christian Archibald Herter determined that fats were more readily tolerated by coeliac patients than carbohydrates and recommended a similarly starch-free diet. As we shall soon see, both men were significantly off the mark, and these special diets did little to ease their patients’ suffering.

The first major breakthrough in the treatment of coeliac disease was made in 1924 by American physician Sydney Haas, who prescribed a diet consisting largely of bananas. This diet was based on Haas’s experiences in Puerto Rico, where he observed that villagers who ate large amounts of bread often suffered from coeliac, while the farmers who survived mostly on bananas seldom did. But unlike Gee and Herter’s previous recommendations, Haas’s banana diet actually seemed to work. In his influential 1924 paper on the subject, Haas described the cases of 10 children with coeliac. Of these, the 8 treated with the banana diet made full recoveries while the two left untreated eventually died. Children from around the country soon began flooding into Haas’s clinic, while their desperate parents intercepted transport ships at the docks in order to get their hands on precious, life-saving bananas. Meanwhile, the banana industry decided to get in on the action, and began heavily promoting Haas and his new “miracle cure.” Haas would eventually treat over 600 coeliac patients over the course of his career, saving the lives of many. Unfortunately, he also made the mistake of claiming his banana diet constituted a permanent cure. Thus when his patients eventually returned to their regular diets, they inevitably suffered an immediate relapse.

Indeed, while Haas had come tantalizingly close to unlocking the secret of coeliac disease, his attention was focused on the supposed curative properties of bananas. Consequently he missed the key factor in the pathology of the disease: not what was added to his patients’ diet, but rather what was missing from it. It would therefore take another decade – and the efforts of another pioneering doctor – before this two-millennia-old medical mystery at last began to unravel.

Willem-Karel Dicke [“Vill-ehm Car-ehl Dick-uh”] was born in 1905 in the Dutch city of Dordrecht. He studied medicine at the University of Leiden from 1922 to 1929 and specialized in paediatrics at the Juliana Children’s Hospital in the Hague, becoming medical director in 1936 at the age of only 31. In 1932, Dicke attended a lecture at the Dutch Society for Paediatrics where a fellow doctor presented a special medicinal powder meant to combat coeliac disease. Dicke noticed, however, that the powder was often administered to patients alongside a regular breakfast of bread and marmalade, and that the consumption of bread nearly always corresponded with a relapse of symptoms. Speculating that bread – or rather, wheat – might lie at the heart of the coeliac mystery, in 1936 Dicke began a long-term study on a young boy suffering from the disease. Over several months, Dicke kept the boy on an entirely wheat-free diet, and to his delight observed an immediate and dramatic improvement in his symptoms. Furthermore, when the boy returned home to his parents and resumed his regular diet, he suffered an immediate and dramatic relapse. Based on these and other cases, in 1941 Dicke recommended that coeliac patients avoid bread and wheat products entirely and stick to meat, fresh fruit, and vegetables. But as these were in short supply during the War, Dicke instead kept his patients on a simple diet of porridge made without wheat flour.

But it was the Hunger Winter of 1944-45 that truly cemented Dicke’s theory regarding the role of wheat in coeliac. Within months of the Nazis imposing their blockade, wheat flour became nearly impossible to find and bread dropped completely off the Dutch menu. Yet while most of the children in Juliana hospital were miserable for lack of bread, those with coeliac seemed to thrive, with Dicke remarking that:

“To the [coeliac] children, the shortage of food was less severe than the toxic effects of wheat products.”

Indeed, over the course of the famine, the mortality rate of children with coeliac dropped from nearly 35% to almost zero. And when the famine ended and bread was reintroduced to the children’s diets, mortality soared back to its pre-war levels. Dicke seemed to have finally discovered the true cause of coeliac, but he had little time to investigate these findings. An ardent patriot, Dicke actively fought with the Dutch Resistance, hiding downed Allied airmen in the basement of the Juliana Hospital. For this he was arrested by the Gestapo and thrown in jail, only being spared execution due to a shortage of doctors in the Netherlands.

After the war, however, Dicke embarked on a five-year research program to prove his theories about the origins of coeliac disease. He worked closely with biochemist J.H. van de Kamer of the Netherlands Central Institute for Nutritional Research in Utrecht, who had developed a method for measuring the fat content of a patient’s stools. This, in turn, allowed Dicke and van de Kamer to determine the amount of food absorbed by a patient’s intestines when fed various types of cereals. This research revealed that while regular wheat flour produced coeliac symptoms, purified wheat starch did not, disproving the long-held theory that coeliac was caused by starches. Further research finally succeeded in nailing down the real culprit: gluten, a protein found in wheat and rye but not in rice or most fruits and vegetables – including bananas. Researchers in Britain, Scandinavia, and Germany soon confirmed Dicke’s findings, and a gluten-free diet became the standard treatment for coeliac in much of the world. Strangely, however, this treatment was slow to be adopted in the United States due to the influence of Sydney Haas and the powerful banana lobby. As a result, coeliac remains significantly under-diagnosed in the United States compared to the rest of the world.

Today we understand coeliac disease to be an inherited autoimmune disorder affecting around 1 in 100 people worldwide. Gluten in the diet causes the immune system to attack the small intestine, destroying the fine hair-like projections called villi [“vill-eye”] line the intestinal wall. This in turn reduces the body’s ability to absorb nutrients, resulting in the characteristic cramping, fatty diarrhea, malnutrition, and a host of other symptoms including vitamin deficiency, osteoporosis, dermatitis, developmental delay, and increased incidence of certain cancers. But by following a strict gluten-free diet, the vast majority of coeliac sufferers are able to live entirely normal lives.

For his pioneering work on coeliac disease, Willem-Karel Dicke was awarded the very first Dicke Medal, an award specially created in his honour by the Netherlands Society of Gastroenterology. He was also considered for the Nobel Prize in Physiology and Medicine in 1962, but his death soon afterward at the age of 57 eliminated him from contention. However, according to his colleagues Dicke was a humble man and would not have wanted the award anyway. He would have been content knowing that his work had helped make life for sufferers of coeliac disease…well, a little less of a pain in the arse.

Ewbank, Anne, How Famine Under the Nazis Revealed the Cause of Celiac Disease, Atlas Obscura, March 29, 2018, https://www.atlasobscura.com/articles/history-of-celiac-disease