How Do We Know How Old Things Like Dinosaur Bones Are? 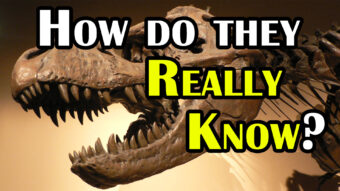 There’s an old joke told in natural history museums about a new tour guide showing around a group of visitors. Stopping before a dinosaur skeleton, he informs the group that the fossil remains are 80 million years and three weeks old. “How do you know that?” asks one of the visitors. “Because it was 80 million when I started,”  says the guide. “And I’ve been here three weeks.” So how do we really know how old fossils like dinosaur bones are?

For hundreds of years the answer lay in stratigraphy, the study of strata or rock layers first pioneered by Nicholas Steno and William Smith in the 17th and 18th Centuries. Fossils form when biological remains become enveloped in mud, sand, seafloor sludge or other kinds of sediment, which slowly accumulates over time and is transformed into sedimentary rock such as shale, sandstone, or limestone by the intense weight of subsequent sediment layers. The relative ages of fossils can thus be determined by their position in the stratigraphic column, with younger remains at the top and older remains at the bottom. However, this method is extremely imprecise, as determining even the relative ages of fossils requires knowledge of the rate at which the original sediment was deposited – something that can only be roughly estimated. In many cases there may be significant pauses in sedimentation, known as hiatuses, during which sediment layers may be eroded away before sedimentation begins anew Entire sections of sequential strata can also be displaced, distorted, or even destroyed by geological processes, further confusing the geologic timeline. For example, over much of northern North America the glaciers of the last ice age scraped away much of the continent’s geological formations down to the Ordovician and Devonian periods of around 400 million years ago, leaving only scattered pockets of younger strata. Thus, stratigraphy alone can only provide a rough estimate of the relative ages of various fossils. To determine their absolute age, palaeontologists must instead turn to the more precise science of radiometric dating.

As the name implies, radiometric dating relies on the phenomenon of radioactivity. Radioactivity is the process whereby an atom, due to either an excess or imbalance of protons and neutrons in its nucleus, becomes unstable and starts to decay in an attempt to reach a more stable, low-energy state. There are three main types of radioactive decay: alpha decay, in which the nucleus ejects an alpha particle consisting of two protons and two neutrons; beta decay, in which a neutron is transformed into a proton, a beta particle or electron, and a neutrino – the latter two of which are ejected; and gamma radiation, which accompanies beta decay and results in the emission of a high-energy photon or gamma ray. With each decay event the atom is transformed into an entirely new element – a process known as transmutation – until a stable, non-radioactive isotope is reached. For example, the common radioactive isotope Uranium-238 slowly transforms via a 14-step decay chain into the stable isotope Lead-206. The rate at which a radioactive isotope decays is measured by its half-life, the statistical measure of how long it takes for half the atoms in a particular sample to decay. This decay rate is extremely regular – in fact, it is one of the most regular processes known in nature – and cannot be slowed or sped up by any physical process such as changes in temperature or chemical reactions. Radioactive decay thus provides scientists with an ideal clock with which to measure the age of the earth.

The most well-known form of radiometric dating is the radiocarbon or Carbon-14 method, first developed by Willard F. Libby in 1952. The isotope Carbon-14 is produced via the bombardment of Nitrogen by cosmic rays in the upper atmosphere, and accounts for less than a billionth of a percent of carbon atoms found in nature. Though it is radioactive, with a half-life of 5,730 years, this decay is balanced out by  production, meaning that the proportion of Carbon-14 to the more common Carbon-12 in nature remains relatively steady. In the form of Carbon Dioxide, Carbon-14 is absorbed by plants and then by the animals that eat them and so on up the food chain, such that the concentration of Carbon-14 in most organisms is roughly that in the atmosphere. When an organism dies, however, it stops absorbing carbon, and the radiometric stopwatch is started. As time passes, the Carbon-14 inside the organism’s remains slowly decays away, the ratio of Carbon-14 to Carbon-12 gradually skewing away from that of the surrounding environment. When organic remains are excavated, this ratio can be measured, and since the half-life of Carbon-14 is known, the time elapsed since the organism’s death can be determined. This is similar to how you can figure out how long an hourglass has been running provided you know the flow rate of the sand and how much sand was in the top and bottom when it was turned over.

While widely used in archaeology and palaeontology, radiocarbon has a number of major limitations. For example, while the technique is based on the assumption that the atmospheric Carbon-14 to Carbon-12 ratio has remained steady throughout history, examination of tree rings has revealed that this ratio has varied over time. The most significant of these variations began in the late 18th and early 19th centuries when the carbon dioxide generated by burning coal and oil diluted the Carbon-14 ratio; and in the 1950s, when above-ground nuclear testing released large amounts of Carbon-14 into the atmosphere. This latter source has created a major contamination problem, and archaeologists must be careful when gathering samples so as not to contaminate them with newer, more Carbon-14 rich material. Other factors which can throw off the accuracy of radiocarbon dating include local volcanic eruptions, immersion in mineral-rich water, or immersion at the bottom of the ocean – all of which serve to distort the average atmospheric carbon ratio. But the greatest limitation of radiocarbon dating is the timescale over which it can be applied. Generally speaking, radiocarbon dating is only useful up to around 50,000 years in the past, past which the Carbon-14 ratio becomes too small to accurately measure. For older remains, like those of dinosaurs, other methods are required.

Among the most common methods for dating fossil remains is the Potassium-Argon series. The isotope Potassium-40, found in many different minerals, decays into stable Argon-40 with a half-life of 1.2 billion years. Argon, being a noble gas, does not react or bind with other atoms in its parent mineral and simply accumulates within it. When that mineral melts into magma, however, the Argon escapes, bringing the Argon-Potassium ratio to zero and resetting the radiometric clock. Once the mineral cools and solidifies – either in the form  of lava or volcanic ash – the Potassium inside continues to decay and Argon begins to accumulate once more. Going back to the hourglass analogy, this is like opening the bottom of the hourglass and allowing the sand in the bottom chamber to spill out; by measuring the Argon-Potassium ratio today, geologists can determine the time elapsed since the mineral was last melted down and solidified.

Of course, this method is only applicable to igneous rocks, whereas fossils are found only in sedimentary deposits. However, where these two mineral types are found in close proximity to each other, radiometric dating of the igneous rocks can be used to estimate the age of fossils in the sedimentary strata. One region in which Potassium-Argon dating is particularly useful is in strata left over from the Western Interior Seaway, a large, shallow inland sea that covered much of central North America around 100-70 million years ago during the late Cretaceous Period. These formations, found mostly in the Midwestern United States and Canada, consist mainly of black shale – the remains of seafloor sediments – layered with a clay-like mineral called Bentonite. Bentonite is composed of volcanic ash from the eruption of  volcanoes on the seashore, and being igneous in origin can be Potassium-Argon dated. If the Bentonite layers above and below a particular stratum are dated, then a very accurate age for any fossils found within that stratum can be found.

Another common method for dating extremely old minerals is the Uranium-Lead series, which relies on the decay chain of both Uranium-238 and the rarer isotope Uranium-235. Uranium-Lead dating is most commonly applied to the mineral zircon, which readily incorporates Uranium into its crystal structure but strongly rejects Lead – meaning that any Lead found within the zircon comes from the decay of the trapped Uranium. This natural resetting of the radiometric clock can thus be used to determine the time elapsed since the mineral first formed. In 2017, this method was used to identify the oldest minerals ever found on earth: 4.4 billion-year-old zircons discovered in the Jack Hills of Western Australia.

Uranium decay inside crystals also forms the basis of another common radiometric method called fission-track-dating. In addition to regular alpha decay, Uranium atoms sometimes undergo spontaneous fission, splitting into a number of high-energy fragments called fission products. These fragments damage the crystal structure on their way out, leaving tiny tracks that can be easily be seen with a microscope. As the spontaneous fission rate of Uranium is known and fission tracks are easily erased by heating, counting these tracks can reveal the timing of high-temperature events such as volcanic eruptions, and this technique is thus often used to verify the results of Potassium-Argon dating. However, it is important to note that geologists and palaeontologists must be extremely careful when applying these and other radiometric dating methods, as certain crystals like zircons are extremely resilient and can often find themselves eroded out of the minerals in which they formed and incorporated into newer sedimentary or igneous fromations. In this case, the dateable minerals within a stratum may be significantly older than the stratum itself. As is often the case in geology, context is key.

There are many other radiometric dating methods, including the Uranium-Thorium, Rubidium-Strontium, and Samarium- Neodymium series, but all work according to the same basic principles. In summary, the age of fossil remains like dinosaur bones is not determined from the fossils themselves but from other, often igneous minerals deposited at the same time. However, this does not mean that stratigraphy is obsolete; radiometric dating is a highly technical and often expensive process, and it is not feasible to independently date every individual fossil. Instead, once the age of a particular stratum or formation is determined, then any fossils found within that formation can be assumed to be of roughly the same age. Indeed, palaeontologists often make use of so-called index fossils, organisms of a known age characteristic to a particular formation or geologic period, to estimate the age of new species found within that same formation. Together, radiometric dating and stratigraphy can yield surprisingly precise results, the Uranium-Lead series being capable of pinpointing the age of a mineral to within an astonishing 250,000 years – not enough for an inexperienced museum tour guide, perhaps, but more than good enough for palaeontologists.