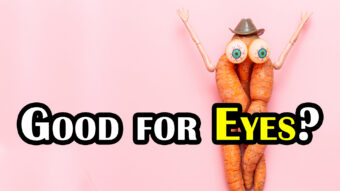 “Carrots help you see in the dark.” Most of us were taught this fact from an early age, presumably in a vain attempt to convince us to eat our vegetables. And on the surface, this makes sense: after all, carrots are rich in beta-carotene and Vitamin A, essential to maintaining the health of our retinas and corneas. But while carrots do have real health benefits, the idea that eating a lot of them will magically grant you night vision superpowers is a myth, one with its origins in WWII British propaganda.

In September 1940 the German Luftwaffe launched the ‘Blitz,’ an aerial bombing campaign against London and other southern English cities with the aim of demoralizing the British into ending the war. While the Luftwaffe initially bombed by day, ferocious resistance by RAF Fighter Command forced them to switch to night bombing. And while this should have made the bombers almost impossible to track and shoot down, the British had a secret weapon up their sleeve: radar.

The invention of radar came about almost by accident. In 1934, British intelligence began receiving reports that the Germans were developing some kind of “death ray” which could use powerful radio waves to stall an enemy bomber’s engines or even set it alight at a great distance. A special committee known as the Tizard Commission was established to investigate these claims, and while they found that the power consumption of such a death ray would make it impractical, they also came to another, surprising conclusion: that a far more reasonably-sized transmitter could be used to detect and track enemy aircraft long before they reached their target. The task of evaluating this possibility fell to radio expert Robert Watson-Watt and his assistant Arnold Wilkins, who on February 26, 1935 used a prototype radio transmitter to successfully detect an RAF bomber flying over Daventry. The system soon became known as “Radio Direction-finding And Ranging,” or RADAR, and just prior to the war a line of radar towers known as Chain Home was erected along the Channel coast. These proved invaluable during the Battle of Britain, allowing incoming German bombers to be detected far enough in advance for RAF fighters to be scrambled to intercept them. However, these units were extremely large and operated at relatively long wavelengths, making them all but useless for shooting down aircraft at night.  Then, in 1940 John Randall and Harry Boot at the University of Birmingham developed the cavity magnetron, a device which allowed the construction of radars light and compact enough to be mounted in aircraft. The first of these units, the Airborne Interception or AI radar Mk. IV, first entered service in early 1941, and allowed British night fighter pilots to find and shoot down German bombers in large numbers. The greatest of these aces, Squadron Leader John ‘Cat’s Eyes’ Cunningham, racked up 20 victories before the war’s – 19 of them at night.

In order to conceal the secret of radar, the British Ministry of Information launched a campaign of misinformation attributing the success of pilots like Cunningham to their superior eyesight, gained through eating large amounts of carrots. According to John Stolarzcyk of the World Carrot Museum – and yes, there is such a thing: “Somewhere on the journey the message that carrots are good for your eyes became disfigured into improving eyesight.”

But this propaganda wasn’t just aimed at the Germans. When the Luftwaffe began bombing by night, the British imposed a total blackout, requiring citizens to keep their lights off or cover their windows with heavy blackout curtains to deny German pilots a means of locating their targets. Inevitably, blackout conditions lead to a sharp increase in traffic collisions, with nearly 1,130 Britons dying in nighttime road accidents in the first year of the war alone. Soon, Ministry of Information posters appeared claiming: “Carrots keep you healthy and help you see in the blackout.” Other government departments also got in on the campaign, with the Ministry of Agriculture releasing a statement in December 1940 claiming: “If we included a sufficient quantity of carrots in our diet, we should overcome the fairly prevalent malady of blackout blindness.”

Lord Woolton, head of the Ministry of Food, even coined a catchy saying: “A carrot a day keeps the blackout at bay.”

This campaign was itself part of a larger effort to change the eating habits of the British public. Being a small island nation Britain depended on foreign imports for much of its food supply, so at the outbreak of the war the German navy launched a campaign of unrestricted submarine warfare against merchant shipping in order to starve the British into submission. In response, the British government imposed a system of rationing on food, fuel, and other everyday products. With many staple foods like butter, meat, and sugar now in short supply, the Government encouraged citizens to switch their diet to one richer in vegetables, which they could grow themselves in home “Victory Gardens.” The Ministry of Food’s “Dig for Victory” campaign cast home gardening as a patriotic, war-winning duty, with Lord Woolton stating: “This is a food war. Every extra row of vegetables in allotments saves shipping. The battle on the kitchen front cannot be won without help from the kitchen garden. Isn’t an hour in the garden better than an hour in the queue?”

This push for food sustainability led to a greater emphasis being put on the consumption of carrots, which were easy to grow, highly-nutritious, and could be used as a mild sweetener in the absence of real sugar. Cartoon characters called “Dr. Carrot” and “Potato Pete” were used to promote vegetable consumption, while Government pamphlets and radio programmes like “The Kitchen Front” touted a wide assortment of creative – and sometimes questionable – carrot-based recipes such as carrot pudding, carrot cake, carrot marmalade, carrot flan, carrot fudge, “Woolton Pie” and even a drink called “carrolade.” Children were even sold carrots-on-a-stick in place of lollipops. And in case defeating the Nazis wasn’t motivation enough to eat your carrots, the Government continued to push the notion that a carrot-rich diet would prevent you from being hit by a truck during the blackout.

Such was the British obsession with carrots that it even made the news in the United states, with Raymond Daniell, the New York Times’ London Bureau Chief, sarcastically remarking: “Lord Woolton, who is trying to wean the British away from cabbage and Brussels sprouts, is plugging carrots. To hear him talk, they contain enough Vitamin A to make moles see in a coal mine.”

But following its entry into the war, America would also jump onto the carrot bandwagon, with the New York Times printing British Ministry of Food recipes and articles stating: “England grows a lot of carrots, and it’s on them that she largely relies to prevent her people from bumping into lampposts, automobiles, and each other.”

Even Walt Disney got in on the game, with Disney cartoonist Hank Porter designing a family of cartoon characters based on the British Dr. Carrot – including Carroty George, Pop Carrot, and Clara Carrot – to promote vegetable consumption to the American public. Warner Brothers also made their own contribution in the form of a wisecracking, carrot-munching rabbit called Bugs Bunny.

These campaigns were so successful that by 1942 Britain found itself with a 100,000-ton surplus of carrots. But what of the original goal of the campaign, to deflect German attention away from the existence of airborne radar? While there are apocryphal stories of the Germans feeding their pilots larger amounts of carrots, most historians agree that they were not fooled by the British propaganda. According to Bryan Legate, assistant curator of the RAF Museum in London:

“I would say that whilst the Air Ministry were happy to go along with the story, they never set out to use it to fool the Germans. The German intelligence service were well aware of our ground-based radar installation and would not be surprised by the existence of radar in aircraft. In fact, the RAF were able to confirm the existence of German airborne radar simply by fitting commercial radios into a bomber and flying over France listening to the various radio frequencies.”

The campaign was far more successful on Allied civilians, with the myth of carrots being good for night vision stubbornly persisting to this day.

This is not to say, however, that carrots have no effect on eye health. Far from it. Mild Vitamin A deficiency can lead to night blindness – the inability to see in low light – while severe deficiency can lead to a serious degeneration of the retina and cornea. Very year an estimated quarter to a half-million children go blind from Vitamin A deficiency – mostly in poorer countries like Nepal and regions of India – and supplements of Beta Carotene and Vitamin A have proven effective in reversing much of the damage. However, Vitamin A can only restore and maintain eyesight to regular healthy levels; it cannot magically grant you night-vision superpowers. And in excessive amounts Vitamin A can actually be toxic, although getting it in the form it comes in carrots and other such vegetable sources will not be harmful as your body won’t convert it to Vitamin A if it doesn’t need it, unlike if you get it from an animal source like liver or an animal-based Vitamin A supplement where it’s already in that form. Furthermore, studies have shown that carrots are actually a relatively inefficient source of Vitamin A. As alluded to, Beta-Carotene is converted into Vitamin A by E.Coli bacteria in the gut, and it takes around 12-21 molecules of Beta Carotene to produce just one molecule of Vitamin A.

So go ahead: eat as many carrots as you want. But if you really want to see in the dark – and we won’t ask why – then may we suggest a pair of night-vision goggles?