The Cancer Pandemics Spread By Bites and Mosquitoes 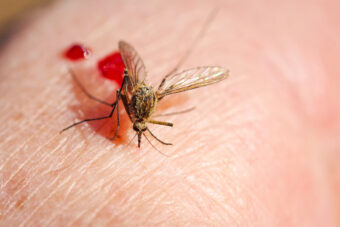 In an oversimplified nutshell, cancer is, to quote cancer.gov, a disease “in which abnormal cells divide without control and can invade nearby tissues.”  Given its propensity to spread and divide in an uncontrolled manner throughout a person’s body, it brings up the question of whether it’s possible for cancer cells to make their way from one living thing to another where it will in turn infect their tissues. And it turns out, while there has yet to be a human cancer that has managed to spread from human to human in a widespread way to cause a pandemic, this has happened with a few animals and is entirely possible for it to happen with humans, and has on an extremely limited scale, as we’ll get into shortly.

But before that, enter the Tasmanian Devil. In the early 1990s a rather odd disease popped up among Tasmanian devils, manifesting in a tumor growths on their faces and mouths. This aptly named Tasmanian Devil Facial Tumor Disease quickly spread from devil to devil and today over 95% of the entire species will ultimately find themselves infected at some point in their lives.

What makes this particular disease so interesting is that once it was studied in detail, it turned out it was not caused by some more common pathogen like a microbe or virus that then in turn induces cancer in the host. Rather, the cancerous cells themselves were being transplanted and growing in and on the new host. If that didn’t make the Tasmanian devils unlucky enough, bizarrely, in 2014 a second, distinct strain of the cancer developed and is now also being transmitted.

As for the means of transmission, this is via the Tasmanian devils fighting and mating with one another, with the cancer cells transmitting through biting in the process of these two activities.

Once in the other devil’s body, the cells continue to replicate and ultimately usually kill the host within 6 months. This occurs via the devil either dying from the spread of the cancer and failure of organs, or ceasing to be able to eat due to the size of the growths around their mouths and face, even sometimes with the tumors pushing out their teeth or resulting in fractures in their jaw bones.

That said, some devils are more resistant to the tumor than others, with some infected relatively recently found to now be able to live up to 2 years. Because those more resistant then have more time to breed, this has resulted in more Tasmanian devils resistant to the cancer being born- a bit of rapid evolution in action, taking only about ten generations of the devils to manifest. In fact, not only have the devil population’s decline started to stabilize in the last few years, but there have even been a couple dozen cases where a given devil has been observed to make a full recovery after their bodies successfully fought off the disease.

Moving over to our canine friends, the oldest known single-cell lineage still replicating away are the cells that cause a disease known as Canine transmissible venereal tumors. The first of these tumorous cells replicated some 11,000 years ago, and actually diverged from canids somewhere around 6,000 years ago- meaning today the cell line has more or less evolved into something of a unicellular organism in its own right, with only 57-64 chromosomes instead of the normal 78 found in dogs.

As to the transmission, this is almost always transmitted sexually, with the tumor cells infecting the male dog’s Mr. Happy and the female dog’s outer Mrs. Happy covering. That said, given dogs’ propensity to lick and sniff these areas before and after putting on some Marvin Gaye, it has been observed to infect their noses and mouths as well.

Now, at this point you might be wondering- if this is technically possible, even in humans, why isn’t this something seemingly ever discussed as a risk-factor when around someone with cancer? And has cancer from one human ever infected another?

As to the latter question, cancer spreading from one human to another has indeed happened many times.

For example, consider the case of an unnamed 53 year old surgeon which occurred sometime in the 1990s. The paper covering the case notes said surgeon operated on a likewise unnamed 32 year old patient to removed an abdominal tumor. While doing this, the surgeon accidentally cut his own hand. For reasons having nothing to do with potentially getting cancer, the cut was immediately disinfected. Nonetheless, five months later, the surgeon had a lovely tumor on his hand in the very spot he’d been injured during that operation. When said tumor was removed and analyzed, it was found to have been made up of cells from the now deceased former patient of the surgeon’s. A part of him had temporarily lived on in another host.

In a similar type event, this one in 1986, a lab technician was injecting colon cancer cells into mice and accidentally poked herself in the hand with one of the needles. A tumor developed on the site a couple weeks later and was removed without incident.

Moving on from there, in 2007 four rather unlucky people got some organs from an elderly woman who’d died of a stroke. When her liver, lungs, and kidneys found their way into people in need of them, all four of the patients got cancer not long after, with three of them dying of it. Later analysis showed the cancer cells came from the organ donor, who had unknowingly had breast cancer when she died of a stroke.

Moving on from here, in a case in 2014, a Colombian man was having some rather curious health issues and went to the hospital to see what was wrong. Upon investigation, tumors were found in his lungs, liver, and adrenal glands. The problem was, as stated by one of the physicians analyzing the tumor cells, Dr. Atis Muehlenbachs, “It looked like cancer, but the tumors were composed of cells that were not human.”

Eventually they tracked down that the DNA was from a tapeworm- meaning a tapeworm’s cancer had successfully spread throughout its host. Unfortunately for the man, at that point it was too late. You see, he also had HIV, which while fully treatable, with people infected with HIV nowadays living rather normal lifespans if they keep up on their medication, the combination of HIV and some bizarre form of cancer doctors couldn’t identify resulted in him giving up hope of living and refusing all treatment in the weeks leading up to the source of the cancer finally being discovered.

So if this has happened in the past on numerous occasions and has been a thing with certain animals, why hasn’t there ever been a transmitable human cancer pandemic?

To begin with, in order for cancer to transmit from one person to another, you’re going to need to get the offending cells from the one person’s body into the other in a way in which the cell can survive the initial transplantation and then have what it needs to keep replicating.

Let’s say that did happen and the cells get into the other person’s body by some miracle, perhaps when taking a cancerous bald-headed gnome for a stroll in the misty forest, or in cases like the aforementioned surgeon who cut his hand. The problem for the cancer here is that in virtually all cases, the new host’s immune system is going to recognize the foreign invader and kill it off promptly.

Exceptions occur in instances where the person’s immune system was extremely compromised, such as from AIDS or individuals taking immunosuppressant drugs. Demonstrating this, this is how one of the four aforementioned organ transplant patients survived the breast cancer he got from the original organ owner. Unlike the other three who died as a result, in his case, removal of the donated organ was not immediately life threatening. Thus, the doctors simply removed the cancerous kidney and then he was able to stop taking the immunosuppressant drugs, making it extremely likely his immune system would eradicate the cancer cells. Just in case, they also treated him for the cancer directly. One or both of the methods worked swimmingly and he was cancer free not long after and ready for a new transplant that wasn’t so troublesome.

Of course, the more concerning potential exceptions here are cancerous cells in which the cell has mutated in a way that makes its foreign body nature difficult or impossible for your immune system to detect. This is seemingly what happened with the aforementioned surgeon with the tumor on his hand. You see, in order to find out why his body had not simply gotten rid of the foreign tumor naturally, he was examined to see if he had any immune deficiencies. The results of the tests didn’t find any such issue, meaning the tumor cells themselves seem to have successfully masked their presence from his immune system somehow.

This is also what is happening, for example, in the cases of the canine sexually transmitted tumors, as well as with the Tasmanian Devil facial tumors. In the latter, normally their immune systems would use the Major Histocompatibility Complex- a group of proteins on the surface of most cells- to see that the cells are foreign bodies. But in the case of these particular tumor cells, they don’t have an MHC, leading researches to conclude this is probably why they aren’t being detected and eradicated in the vast majority of cases up until more resent times where this is starting to happen as noted.

All that said, this sort of thing is not generally considered a great concern for humans, even though there have been known cancerous cells that can infect and successfully establish themselves in a new host. This is primarily because, first, unlike Tasmanian devils, we aren’t going around biting one another randomly, or when mating… or at least most of us aren’t. We here at TodayIFoundOut don’t judge. You do you.

Thus, the extremely low odds of the cancerous cells being transmitted successfully from one host to another, combined with the also extremely low odds of your immune system being unable to eradicate the problem if it by some miracle actually happens, have to date resulted in it never being a problem for humans in general. And even in the future with cases of a potential STD version, similar to what’s been going around in dogs for thousands of years, humans have things like condoms and widespread monogamous relationships that would limit the initial spread to some extent, and potentially allow for the outbreak to be contained quickly before becoming a deadly pandemic.

That said, while a pandemic at any given moment is unlikely, it obviously can and occasionally does happen. Perhaps more concerning is the case of Syrian hamsters, where such a strain of cancerous cells is actually transmitted from hamster to hamster primarily via arguably the most hated and already deadly creature of all- mosquitoes. Should a similar strain of mosquito transmittable cancer occur in humans… Let’s just say we’re potentially going to have a very bad time.

But at least in known human history, this has not yet been a real issue for humans. Of course, transmittable things that can in turn then cause cancer in humans are a huge problem. For example, versions of the human papillomavirus (HPV) occasionally result in cancer in the host, killing literally hundreds of thousands of people annually. And cancer in general currently kills about 10 million people worldwide every single year, about 1 in 4 deaths in the U.S., making it the #2 top killer in the U.S.