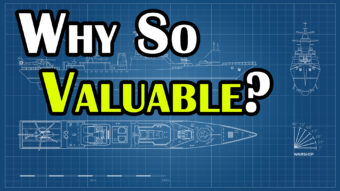 On February 27, 1942, a strike force of British, Australian, American, and Dutch ships clashed with an Imperial Japanese Navy Cruiser squadron off the coast of Sumatra. The engagement, known as the Battle of the Java Sea, was a decisive victory for the Japanese, resulting in the loss of 2,300 Allied sailors and 5 ships, including the light cruiser HMS Exeter. 65 years after the battle, a team of exploration divers re-discovered the wreck sitting in 200 feet of water 90 miles north-west of Bawean Island. But when another team surveyed the wreck site 10 years later, they made a shocking discovery: the wreck had completely vanished, leaving only a 500-foot-long depression in the seabed. The disappearance was not the work of supernatural forces but of Indonesian illegal salvagers, who armed with nothing more than small boats and air compressors had managed to strip away the nearly 10,000 ton hull in less than a decade. While warships contain huge quantities of bronze, brass, copper, and other non-ferrous metals that can fetch high prices on the scrap market, the complete disappearance of Exeter’s entire hull was baffling, leading some to speculate that it had been harvested for the little-known but highly lucrative market for low-background steel. But was it really and how did this bizarre demand for battleship steel come to be?

To begin with, low-background metals are those which emit no ionizing radiation, and the term generally refers to metal produced prior to July 16, 1945. On that day at 5:29 AM, the world’s first atomic bomb, codenamed Trinity, was detonated near Alamogordo in the New Mexico desert. This event changed the world forever – not only militarily and politically, but chemically, releasing into the atmosphere dozens of radioactive isotopes that had never before existed in nature, such as Plutonium 239, Strontium-90, Caesium-137, and Technetium-99. Over the next 35 years, the United States, Soviet Union, Great Britain, France, and China would conduct over a thousand atmospheric nuclear tests, spreading huge quantities of these isotopes over every corner of the globe. And as the standard Bessemer Process for making steel involves blowing atmospheric air through molten iron, these isotopes also found their way into nearly every piece of steel produced after 1945.

For most applications this contamination is not a problem, as the radiation emitted by regular steel is far below regular background levels. But for certain pieces of highly-sensitive scientific equipment, even this low-level radiation can generate unacceptable interference. One example of such equipment are Whole-Body Counting Rooms, devices used in hospitals and nuclear power plants to measure the amount of radioactive material a person’s body has absorbed. To prevent background radiation from interfering with measurements, such rooms must be encased in thick metal shielding, but because of the aforementioned radioisotope contamination only steel produced prior to 1945 can be used. From the 1950s through the 1980s, when most of these rooms were constructed, the cheapest and most readily-available source of low-background steel was from decommissioned warships built prior to 1945. For example, hull plates from USS Indiana, commissioned in 1942 and scrapped in 1962, were used to build ‘steel rooms’ for whole-body counters at the Illinois VA Hospital and the Utah Medical Center.  Even shipwrecks have been salvaged for their low-background steel, most notably the remains of the WWI German High Seas Fleet scuttled at Scapa Flow in 1919.  In 1974, hull plates from the SMS Kronprinz Wilhelm were used to build a whole-body counter room at a Scottish hospital, and it is rumoured that steel from the SMS Markgraf was used in radiation detectors on Explorer 1, America’s first satellite, and the Voyager 1 and Voyager 2 space probes, making it the only battleship to make it into space. However, NASA has never been able to confirm this.

Another commonly-sought low-background metal is lead, which is not only susceptible to contamination by atmospheric radionuclides but can also be naturally contaminated with the radioactive isotope Lead-210. In the 1980s, electronics manufacturers discovered that stray radioactive emissions from regular lead were affecting the manufacture of microchips. In order to obtain sufficiently low-background lead, the manufacturers proceeded to dismantle 400-year-old medieval stained glass windows and swap out the old lead for new. More recently in 2010, the Italian National Institute of Nuclear Physics in Rome needed shielding for its Cryogenic Underground Observatory for Rare Events, or CUORE, an experiment for detecting ghostly subatomic particles called neutrinos. Wanting only the most inert shielding, the Institute obtained permission from the National Archeological Museum in Cagliari to melt down 270 lead ingots from an ancient Roman shipwreck that sank off the coast of Sardinia almost 2,000 years ago. Experiments at Los Alamos National Laboratory in New Mexico have used lead pipes pulled up from Boston’s old plumbing system while Duke University and the University of Chicago has used lead ballast from the 300-year old Spanish Galleon San Ignacio. Unsurprisingly, given the extreme rarity of these sources low-background lead can command premium prices, with ingots from the San Ignacio selling for $33 USD per kilogram – nearly twelve times the market price for regular lead. And not all low-background lead that shows up on the market has such clear provenance, raising concerns that some of it may have been illegally salvaged from archaeologically priceless shipwrecks.

Which brings us back to the question: was HMS Exeter salvaged for low-background steel? More than likely the answer is no, as the demand for low-background steel has actually all but dried up in recent years. In 1963, the US, USSR, and Great Britain signed the Limited Test Ban Treaty, banning all atmospheric nuclear tests. Though France and China continued atmospheric testing until 1980, since then radionuclide contamination in the atmosphere has fallen to only 1/30th of 1963 levels. Steelmaking has also largely turned away from the Bessemer Process in favour of the Basic Oxygen Process, which uses uncontaminated pure oxygen instead of atmospheric air. Advances in electronics have also allowed scientific apparatus to compensate for stray radioactive emissions, meaning that for all but the most sensitive instruments like neutrino detectors, low-background steel is no longer necessary. In all likelihood, then, HMS Exeter was cut apart for ordinary scrap steel.

However, the radioactive contamination of the atmosphere has had at least one positive effect. By studying the isotopic composition of wine, forensic chemists are able to tell whether a certain bottle was produced after 1945, allowing for the identification of counterfeit vintages. Thus proving that every mushroom cloud has a silver lining.

Speaking of battleships and steel, it turns out the slinky- yes the once popular toy- graced the world with its presence thanks to battleships. How?

With a $500 loan (about $7,000 today) to pay a company to manufacture a small quantity of Slinkies, in 1945, Richard and Betty made an attempt to sell the toy in a retail outlet store in Philadelphia. The retail store agreed to put 400 Slinkies on display for the upcoming Christmas shoppers. After a few days and no sales, Richard began to fear the worst.   He decided to go down to the store and display what the toy could do.  His wife Betty agreed to meet up with him later that night.   When she arrived, she saw a line of customers purchasing every last slinky. All 400 Slinkies sold in 90 minutes.

That said, while sales quickly surged, by the late 1950s, things weren’t so rosey. Finally, in 1960, Richard James left his struggling company, which was deeply in debt, and moved to Bolivia where he became a missionary.  When Betty refused to go with him, he told her she could have the company and he didn’t care what she did with it.  Betty then took over management and proved to be a much better business person than her ex-husband. The company expanded greatly under her leadership and to date has sold over 300 million Slinkies.

For her contributions in making the Slinky one of the all time best selling toys in the world, Betty James was inducted into the Toy Industry Hall of Fame in 2001.  She died in 2008, at the age of 90.  Her ex-husband, Richard James, died just 14 years after moving to Bolivia, in 1974.