Has Anyone Ever Actually Created a Suitcase Nuke? 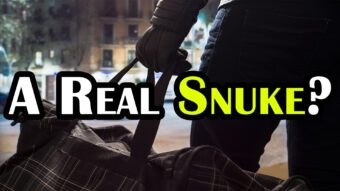 The portable nuclear weapon or “suitcase nuke” has long been a staple of popular fiction, appearing in dozens of movies, TV shows, and video games including The Peacemaker, 24, and Battlefield 3. Our fascination with such devices isn’t hard to understand, for they are the ultimate expression of our fears of nuclear terrorism: untraceable, easily concealed, and devastating. But is it actually possible to make a nuclear weapon small enough to fit in a suitcase, and if so, has anyone actually built one? Well, yes, and yes, but that someone was not some small terrorist cell but rather the American Government.

Introduced in 1961, the Special Atomic Demolition Munition, or SADM, was about as small as it is possible to make a practical nuclear weapon, measuring 14 inches long, 12 inches in diameter, and weighing around 58 pounds. At its heart lay the same W54 warhead used in the infamous M388 Davy Crockett nuclear recoilless rifle. This was a linear-implosion boosted device with a variable yield, allowing the operator to select an explosive yield anywhere between 10 and 1000 tons of TNT by varying the amount of Tritium gas injected into the core. The development of the W54 was long and arduous, with 15 prototypes being test-fired at the Nevada Test Site as part of Operation Hardtack II in 1958 and Operation Little Feller in 1962. This is the largest number of test-firings conducted prior to the adoption of any US nuclear weapon, underscoring the difficulties involved in designing a reliable warhead of this size.

The SADM was only one of an arsenal of small tactical nuclear weapons developed to counter a potential Soviet ground invasion of Western Europe, a role it shared with the aforementioned Davy Crockett and the British Blue Peacock nuclear land mine – and for more on both of these weapons check out our videos “That Time The U.S. Made a Nuclear Gun” and “The Chicken Heated Nuclear Land Mine”. Unlike those weapons, however, the SADM was designed to be carried to its target by hand. Throughout the 1950s, 60s, and 70s, the US Army, Marines, and Navy SEALs assembled special two-man “Green Light” teams specially trained in the handling of Atomic Demolition Munitions. In the event of a ground war in Europe, their mission was to infiltrate Eastern Europe and destroy vital infrastructure such as bridges, roads, dams, airfields, and communications bunkers in order to halt or slow the Soviet advance. This infiltration could be carried out in a variety of ways, with teams dropping in by parachute or swimming ashore from submarines or high-speed boats depending on the specific target. One team even trained to ski down into Czechoslovakia from the Austrian Alps. To protect the warhead from damage, the SADM came with a foam-lined fibreglass carrying case which could be strapped to a soldier’s back or suspended below a parachutist’s harness. For seaborne infiltration or underground use, a special crush-proof container was also developed which could withstand the pressure of 200 feet of water or 100 feet of earth.

Once landed, the SADM team would remove the warhead from its carrying case, place it in a special rucksack, and bury the case before setting off towards their target. Given the SADM’s small size, there was no room for sophisticated safety mechanisms, so the arming mechanism was protected by a simple steel plate fitted with a combination lock. As the US military at the time followed the two-man rule whereby no single person could arm a nuclear weapon, each team member was only given half the combination. However, this created a dangerous liability, for if either team member was killed prematurely the bomb would become useless. Therefore, according to U.S. Army Captain Tom Davis, who trained to use the SADM in the early 1970s, most teams agreed to share the whole combination in case of actual war. In the event a mission had to be aborted, teams also carried a small amount of conventional explosives to blow up the warhead and prevent its sophisticated design from falling into enemy hands.

If the team managed to reach their target, the arming process was extremely simple. After unlocking and removing the cover plate, the soldiers would remove the detonator from its storage compartment and place it in the arming well. They would then set the timer for up to 12 hours’ delay on the Mod 1 bomb or 24 hours on the Mod 2, flip the arming switch, and, in the words of the great military historians Iron Maiden, run to the hills.

While the US Government denied that SADM operations were intended to be suicide missions, a host of factors made it extremely unlikely that the Green Light teams would ever make it home alive. While extremely small for a nuclear weapon, as a piece of infantry equipment the SADM was extremely unwieldy, with the warhead plus carrying case and harness weighing over 90 pounds. This made it difficult for SADM teams to move quickly or stealthily and significantly increased the risk of injury. More unnerving still was the fact that the team could never really know just when the bomb would go off. To protect the warhead against electromagnetic pulses from nearby nuclear detonations, Sandia Laboratories fitted the SADM with an entirely mechanical timer, which in testing was found to be so inaccurate it regularly detonated the bomb up to 13 minutes short or long of the set delay – a fact which made getting to the minimum safe distance a dicey proposition.

But the greatest challenge to the team’s survival would have been the simple fact of being stranded behind enemy lines, cut off from all means of support, at the opening of a nuclear war. Despite Government assurances, as former SADM operator Mark Bentley stated in a 2019 interview, “We all knew it was a one-way mission, a suicide mission.”

While over 400 W54 warheads were produced and stationed at forward European bases like Miesau in Germany, none were ever used in combat. By the late 1970s the concept of a limited, winnable nuclear war had become antiquated, with both NATO and the Warsaw Pact realizing that any conventional conflict was likely to escalate into a full-blown global nuclear war. Nonetheless, the SADM teams remained alert and ready to jump into action until 1989, when the W54 was finally declared obsolete and all stockpiled warheads were recalled and decommissioned.

While no miniature nuclear weapons are currently listed in the US nuclear stockpile, the existence of the SADM was only publicly revealed in 1984 – a full two decades after the weapon’s introduction – meaning it is possible such weapons are still kept in inventory. In 1992, Soviet defector and former Military Intelligence officer Stanislav Lunev claimed that the Soviet Union had developed their own portable nuclear device called the RA-115, and that several had even been smuggled across the Mexican border and hidden in caches throughout the United States. According to Lunev, these devices were intended to be used to assassinate top US officials in the event of war. These claims, however, have been severely disputed and despite a thorough search of the areas identified by Lunev – including the Shenandoah Valley in Virginia – no such weapons caches have ever been found. We can only hope that Lunev was indeed exaggerating and that suitcase nukes are once again merely the stuff of spy fiction.

Srubas, Paul, His Job Was to Place Atomic Bombs. Place Them, not Drop Them. Set the Timer, Run Like Hell. Green Bay Press-Gazette, January 7, 2019 https://www.greenbaypressgazette.com/story/news/2019/01/07/depere-atomic-bombs-hiroshima-nagasaki-fort-belvoir-davycrockett-mark-bentley-army-service-cold-war/2418122002/