Who Invented Russian Roulette and Has Anyone Ever Actually Played It? 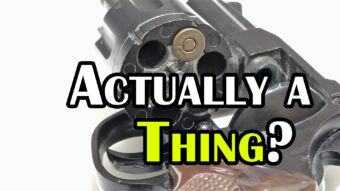 The rules are simple. All that is needed is a revolver, some cartridges, and one or more players. The revolver is opened, a single cartridge loaded, and the cylinder spun. The players then take turns placing the revolver against their heads and pulling the trigger. Depending on the rules, the cylinder is either re-spun after each play or left as-is. Play continues until a player either forfeits or blows their brains out. This is Russian Roulette, a deadly game of chance with a dark allure, which through countless portrayals in popular culture has become known as the pastime of the unhinged, of the desperate, of those with nothing left to live for. In reality, however, the majority of the victims of Russian Roulette have been ordinary people, whose attempts to recreate what they had seen in films or on television ultimately ended in tragedy. But where did the idea of Russian Roulette come from in the first place, and how many people have actually played this most dangerous of games?

The first written description of something resembling Russian Roulette comes from The Fatalist, the final chapter of Russian author Mikhail Lermontov’s 1840 novel A Hero of Our Time. In the chapter, the protagonist of the novel, Pechorin, tells the story of Lieutenant Vulich, a Cossack officer who becomes embroiled in a debate about fate and destiny. Believing that a man’s death is predestined and cannot be changed, Vulich pulls a random pistol off the wall, primes the pan, places it to his head and pulls the trigger. When the gun fails to go off, his comrades conclude that it must have been unloaded. But when Vulich re-primes the weapon and aims it at the wall, this time it goes off. Mere hours later Vulich’s fatalism is vindicated when he is cut down by a drunken, sabre-wielding soldier chasing after an escaped pig.

The more familiar form of Russian Roulette would have to await the development of the modern cartridge-firing revolver. The most common origin given for Russian Roulette is among Tsarist forces in 1917, when, according to one account:

“…their officers felt that they were not only losing prestige, money, family and country, but were being also dishonoured before their colleagues of the Allied armies, some officer would suddenly pull out his revolver, anywhere, at the table, in a cafe, at a gathering of friends, remove a cartridge form the cylinder, spin the cylinder, snap it back in place, put it to his head and pull the trigger.”

However, there are a number of problems with this account. First, the service revolver in use with the Russian army during this period, the M1895 Nagant, is unique in having a mechanism that cams the cylinder forward with every shot, creating a tight gas seal between the cylinder and the barrel. This mechanism makes it functionally impossible to spin the cylinder freely as is required when playing Russian Roulette. But the main issue is that the preceding passage comes not from a historical account but rather a 1937 short story written by Swiss-American adventure writer George Surdez. First published in Collier’s Magazine in January 1937, the story, titled Russian Roulette, takes the form of a letter written by a Sargent Hugo Feldheim of the French Foreign Legion to his Lieutenant, seeking advice on how to cover up the suicide of fellow officer Sergeant Burkowski. Burkowski, a gambling addict, introduces Feldheim to the titular game, which he picked up while serving in the Russian army during First World War. Seeking ever greater thrills, Burkowski plays the game with increasing frequency, ultimately resulting in his death.

The story was the first popular depiction of Russian Roulette, and the first to refer to it by that name. However, as Surdez kept few research notes, it is unknown whether this depiction is based on actual accounts or whether he simply made the whole thing up. Evidence pointing to the latter includes the aforementioned incompatibility of the Russian Nagant revolver and the fact that in Surdez’s description of the game five cartridges are loaded instead of only one – giving 1-in-6 odds of survival that – one imagines – none but most foolhardy players would be willing to accept.

Nonetheless, there is historical evidence of Russian recruits introducing some form of firearms-based game of chance to the French Foreign Legion in the 1920s. In his 1991 history of the Legion, author Douglas Porch writes:

“The Russian recruits may have been poor soldiers, but they were credited with one cultural innovation in the postwar legion – the game of “coucou.” Apparently imported from Czarist army messes, couch was a variation upon Russian roulette with the odds of survival greatly reduced. The rules required one legionnaire chosen by lot to step outside while his comrades arranged themselves around the walls of a completely darkened room. The single legionnaire then reentered the room and said “coucou”, while, one imagines, simultaneously taking violent evasive action as his comrades took this as a cue to fire their revolvers in his general direction.”

But whatever the veracity of Surdez’s story, its impact on the American popular psyche was immediate and long-lasting. On January 8, 1938, less than a year after its publication, Thomas H. Markley Jr. of Austin, Texas killed himself while playing Russian Roulette to celebrate his 21st birthday. It was to be the first in a long line of similar incidents that would claim dozens of lives over the following decades, including those of R&B musician Johnny Ace in 1954 and actor Jon-Erik Hexum in 1984. The most public and shocking of these deaths occurred on September 3, 1976 during a performance of Finnish magician Aimo Leikas’ famous Russian Roulette act.The act involved loading a revolver from a mixed box of live and dummy ammunition, with Leikas supposedly using psychic powers to select only the dummy rounds. Leikas had performed the act without incident for over a year, but on that fateful day he accidentally selected a live round and fatally shot himself in front of a live audience.

But perhaps the most influential cultural depiction of Russian Roulette comes from the 1978 Vietnam War film The Deer Hunter. In the film’s most infamous scene, three American soldiers, played by Robert de Niro, Christopher Walken, and John Savage, are captured by the Vietnamese and forced to play Russian Roulette for their guards’ entertainment. Shattered by the experience, Walken’s character, Corporal Nick Chevotarevich, turns to playing Russian Roulette for money, ultimately leading to his death. In addition to shocking audiences, the film generated significant controversy over its depiction of the Vietnamese treatment of American POWs, with many pointing out there was no evidence for the events depicted in the infamous scene. In his review of the film, however, Roger Ebert defended the use of Russian Roulette as an artistic choice:

“It is the organizing symbol of the film: anything you can believe about the fame, about its deliberately random violence, about how it touches the sanity of men forced to play it, will apply to the war as a whole. It is a brilliant symbol because, in the context of this story, it makes an ideological statement about the war superfluous.”

Tragically, in addition to re-implanting Russian Roulette in the popular psyche, the release of The Deer Hunter lead to a major resurgence in copycat suicides. According to psychiatrist Thomas Radecki and columnist Paul Simon, between 1978 and 1989, a total of 35 deaths in the United States were directly attributable to games of Russian Roulette inspired by viewings of The Deer Hunter. And the trend continues to the present day, with one of the most recent Russian Roulette deaths taking place on January 24, 2019. The incident involved two Saint Louis police officers, Katlyn Alix and Nathaniel Hendren, playing a variation of the game called Russian Poker, in which the players point the weapon at each other rather than at themselves. During the second round the weapon discharged, killing Officer Katlyn.

Of course it is impossible to know the exact number of people killed by Russian Roulette, as the aftermath of a solo game is often indistinguishable from suicide, and surviving players often cover up the cause of death to protect themselves. Nor is it possible to know who will be seduced by the game’s deadly allure.

Webb, Benjamin, Russian Roulette History – When and How it Came About? Best Casino Sites, June 3, 2019, https://www.bestcasinosites.net/blog/russian-roulette-history.php