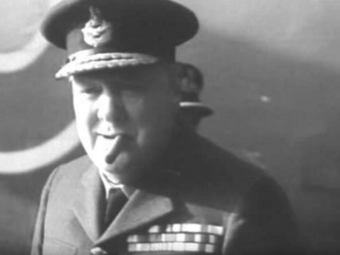 Throughout World War 2, Winston Churchill gave a number of speeches that galvanized the British public in the face of extreme hardship and convinced them to keep fighting that good fight against Adolf and his cronies.

Perhaps the most famous speech Churchill ever gave was the one he spent the longest time agonising over- This was their finest hour, where he stated in part,

What General Weygand has called the Battle of France is over … the Battle of Britain is about to begin. Upon this battle depends the survival of Christian civilisation. Upon it depends our own British life, and the long continuity of our institutions and our Empire. The whole fury and might of the enemy must very soon be turned on us. Hitler knows that he will have to break us in this island or lose the war. If we can stand up to him, all Europe may be freed and the life of the world may move forward into broad, sunlit uplands.

But if we fail, then the whole world, including the United States, including all that we have known and cared for, will sink into the abyss of a new dark age made more sinister, and perhaps more protracted, by the lights of perverted science. Let us therefore brace ourselves to our duties, and so bear ourselves, that if the British Empire and its Commonwealth last for a thousand years, men will still say, “This was their finest hour.”

The speech was delivered just a month after Churchill became Prime Minister and at a time when the UK was reeling from the news that France had fallen (effectively leaving the British Empire to fight the Nazi war machine alone, until Hitler turned on the Soviet Union in 1941 and the Yanks joined in about six months after that). The speech had to somehow rally the entire country during what Churchill would eventually come to call “The Darkest Hour”. This is a goal the speech is generally accepted as having accomplished and then some, with Churchill’s words deeply resonating with the British public. In particular, Churchill’s sentiments about the British Isles standing strong in the face of what appeared to be impossible odds.

The speech, which lasted around 36 minutes, was first given in private to Parliament on June 18, 1940, and later to the British public via radio and it’s noted that Churchill was making revisions to it until quite literally the last possible moment. For example, when the Churchill Archives Centre dug up the very same copy of the speech Churchill used when he addressed Parliament, they found that it was covered in random annotations, some of which appear to have been made leading right up to just before he gave the speech.

Impressively, some of these literal last minutes additions ended up being amongst the most memorable lines from it. For example, the line “All shall be restored” which was noted as inspiring many a Britain to do their bit for the greater good of Europe, was a line Churchill scribbled in the margins of the speech when he sat on a bench in the House of Commons waiting to be called to speak.

It’s also noted that Churchill simply winged it at some points, making up some of the lines in the speech on the fly. This was something that was facilitated by Churchill’s insistence on printing the speech in blank verse format, which some experts believe allowed Churchill to read and visualise the speech as a piece of poetry, allowing him to better improvise and more comfortably find a natural rhythm when speaking.

Of course, no matter how good something is, even in the days before internet comments there’s always someone to criticize and, despite “This was their finest hour” being considered one of the finest oratory performances ever given, Churchill’s own secretary, Sir Jock Colville, was wildly unimpressed. Among other things, he noted in his diary that the speech was too long and that Churchill sounded tired when he read it. Given that the speech is often ranked alongside things like the Gettysburg Address, Sir Colville’s opinion evidently wasn’t one shared by many others, however.

Finally, because we kind of have to mention this, when Churchill delivered the speech to the British public via radio, he reportedly did so while smoking a comically large cigar which he kept burning in his mouth for virtually the entire time he was speaking…