Anne’s Lesser Known, More Frank, Diary and What Happened After 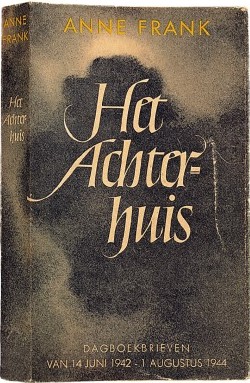 On June 12, 1942, Anne Frank received a diary for her 13th birthday. But you all undoubtedly know a lot about that already. What you might not know is that the popular public version of that diary has been greatly censored because, as young teens are wont to do, Anne talked about her nether regions and sex- a lot.

In fact, the version of Anne Frank’s diary many of you are likely familiar with, depending on the publisher, has had upwards of 30% of the original content removed. While sometimes this is done to streamline Frank’s prose, most of the time the edits were made to avoid offending people with more conservative sensibilities.

For example, entire pages of Frank’s original diary were filled with detailed descriptions of the changes her body was going through as a result of puberty, including several paragraphs describing her vagina in rather explicit detail. Frank’s original diary also included several entries in which she openly pondered her sexuality and discussed with surprising candor her naivety in regards to sex itself, at one point musing in regards to her vagina:

You can barely find it, because the folds of skin hide the opening. The hole’s so small I can hardly imagine how a man could get in there, much less how a baby could come out. It’s hard enough trying to get your index finger inside. That’s all there is, and yet it plays such an important role!

In yet another case, she notes, “PS. I forgot to mention the important news that I’m probably going to get my period soon. I can tell because I keep finding a whitish smear in my panties.”

All things which, as many commentators have noted, are perfectly natural things for a young girl to muse over, but are things that make a lot of people uncomfortable. Amongst them was Frank’s own father, Otto, who, with the help of a publisher, scrubbed the diary of quite a few such things.

For example, she also variously discussed her love life and her relationships with one Peter van Pels, as well as some of the quite intimate conversations they had, such as, “I told him all about girls, without hesitating to discuss the most intimate matters. I found it rather amusing that he thought the opening in a woman’s body was simply left out of illustrations. He couldn’t imagine it was actually located between a woman’s legs. The evening ended with a mutual kiss, near the mouth…”

Additionally Otto also removed several unflattering descriptions of himself, including one rather hilarious entry in which Anne states, “Father’s fondness for talking about farting and going to the lavatory is disgusting.”

On top of this, Otto also saw to it that entries in which she was less than kind to the other people were expunged including an entry where Anne noted, “Father has a friend, a man in his mid-seventies, who’s sick, poor and deaf as a post. At his side, like a useless appendage, is his wife, 27 years younger and equally poor, whose arms and legs are loaded with real and fake bracelets and rings…”

While evidently done out of love to protect Anne’s image, critics (including some surviving members of Anne’s family) have argued that such edits are disingenuous to her memory. As Buddy Elias, one of her cousins, noted in 1996: “It shows her in a truer light, not as a saint, but as a girl like every other girl… people try to make a saint out of her and glorify her. That she was not. She was an ordinary, normal girl with a talent for writing.”

Although unedited versions of Anne’s diary do exist, they’re notably less popular and are often removed from schools and sometimes libraries because of all the parts where Anne discusses sex and puberty. Something that has made the unedited version of the diary rather depressingly, one of the most commonly banned or challenged books in schools across the United States due to it being perceived as inappropriate for teens to read. A bizarre decision considering most of the kids reading the book are the same age Anne Frank was when she wrote it and and are themselves musing about many of the same things, providing a way for students to more directly relate to the young woman.

And speaking of things many people often don’t know about Frank, you might be wondering what specifically happened after her family was ultimately taken. On August 4, 1944 their hiding place was ransacked by the Germans. Considered criminals for ignoring her sister, Margo’s, call-up order and going into hiding, Otto and Edith Frank and their daughters were sentenced to the Punishment Barracks for hard labor and then sent to the Dutch Westerbork transit camp, arriving on August 8th. They were then transferred to Auschwitz on September 3, 1944.

When the Franks arrived at the camp, it was in the wake of a nightmarish frenzy of death – with countless thousands of prisoners being sent to the gas chambers on arrival. Remarkably, the Franks all survived the initial sorting, which saw 549 of the 1,019 people aboard their transport immediately sent to their deaths. The general rubric used by the Germans at the time in those sortings was- those who were fit for labor or in some cases used for research were allowed to live, and all others were killed. Those in their early to mid teens or younger were typically viewed as unfit for labor and immediately sent to the gas chambers, but Anne, who was 15 at the time, ended up being one of the youngest on her transport to be spared that fate.