The Curious Case of the Lead Mask Deaths 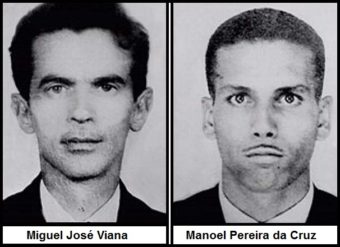 On August 21, 1966, after receiving a tip of dead bodies high on a rugged hill in southeastern Brazil, authorities discovered two formally dressed male corpses in waterproof coats, partly covered with grass and each wearing eye masks made of lead. The young men bore no obvious signs of trauma, and there was no evidence of a struggle or immediately apparent cause of their deaths. So what happened?

Miguel Jose Viana and Manoel Pereira da Cruz were respectable citizens with young families who worked together as electronics technicians in the town of Campos dos Goytacazes near Rio de Janeiro. On August 17, 1966, the two set out ostensibly to gather electronics supplies for their work, and at 2:30 pm, they got on a bus to a nearby town, Nietrói, where they purchased water from a bar and raincoats from a shop.

Witnesses later claimed that Miguel seemed “very nervous” and frequently checked his watch. The pair set off up Nietról’s hill, Marro do Vinétm, at about 3:15 pm, and by some accounts, they hitched a ride in a Jeep. At 5 pm, a local boy, Jorge de Costa Alves, saw them higher up the hill.

According to reports, the boy returned to the hill the next day and saw the men lying on the ground; he assumed they were asleep. When he returned again two days later, on August 20, the hilltop was permeated with a putrid smell, which he returned to town and reported.

Venturing up the hill the next day, police found the dead men as previously described, and near them was an empty bottle of mineral water, two wet towels and a notebook with various notations, including (translated from Portuguese) “4:30 be at the specified location. 6:30 ingest capsules, after the effect protect metals await signal mask.”

Adding to the mystery, in addition to the cryptic note, the notebook also had a list of electronic part numbers, which some have speculated were encrypted codes, though the evidence at hands appears to be that they were simply part numbers used by the men over the course of their day job.

Although the note identified “capsules,” the police found none (presumably indicating if they existed the men had consumed them). Unfortunately, or more likely fortunately for those advocating an alien or supernatural cause of death, no toxicology tests were done on the bodies, so what, if anything, the two men ingested is unknown. The cause of death, however, was determined to be cardiac failure.

During their investigation, police spoke with Elcio Gomes, a friend of Miguel and Manoel, who told them that they were all part of a group of “scientific spiritualists,” comprised of nearly all “electronics specialists . . . in the district,” who experimented in various ways. For example, two months before Miguel and Manoel perished, they and Elcio had built some type of device in Manoel’s garden in an attempt to contact Mars… they were unsuccessful, and the device exploded by accident.

This event was corroborated by Manoel’s father and others, who reported the experiment, as well as a similar but more spectacular event: on June 13, 1966, numerous witnesses reported an explosion on the beach in Espírito Santo (the state just northeast of Rio de Janeiro) that “rocked buildings as far as fifteen kilometers away.” Local fishermen also witnessed the event, and they reported “that a flying saucer was seen to fall into the sea.”

Elcio also spoke of this event to investigators, and he claimed that it followed an intentional meeting between members of the spiritualist group and a UFO; he claimed that after it visited with them for about five minutes, it left with a blinding flash and large explosion.

In any event, when investigators searched Miguel’s workshop, they found tools and lead scraps used to make the masks (which in truth were less masks and more eye covers crudely cut from thin sheets of lead, leaving the rest of the face exposed), and a book with passages about “intense luminosity” highlighted, presumably being the reason the pair wore the lead eye-shields. Authorities also determined that the handwriting on the cryptic message found at the scene of their deaths belonged to neither Miguel nor Manoel.

Rejecting the supernatural theories put forth by Elcio and other locals, police floated the possibility that Miguel and Manoel were involved with smuggling electronics equipment, which had been difficult to come by in Brazil at the time.

Another commonly touted explanation was that the pair had overdosed after taking an illicit drug in order to make better contact with the spirits, and many suggested the two took acid (lysergic acid diethylamide). This theory was supported by a Brazilian “Professor of Yoga” who opined to the Folha de Sao Paulo that “the men may have been trying to carry out a telepathic experiment with high frequency thought waves [with] LSD-25 or Mescalin.”

However, deaths from LSD are extremely rare, and when they do occur, it is usually when it is taken with alcohol, triggering a heart attack, stroke or respiratory failure. There is no evidence that the men were drinking anything but water at or before their deaths.

Nonetheless, the UFO/spirits hypothesis wouldn’t die, particularly given the number of witnesses to alleged UFO events contemporaneous with the men’s demise. These included society maven Senhora Gracinda Barbosa Coutinho da Sousa and her children, who reported that on August 17, 1966, they had seen an “an oval-shaped object, of an orangy colour, with a band of fire around its edges . . . sending out rays in all directions . . . hanging over the top” of Morro do Vintém. According to da Sousa, the object “rose and fell vertically for some three or four minutes.”

Finally, you should know that Miguel and Manoel were not the only male technicians to die on a rugged hilltop in Brazil in the 1960s. In 1962, a television technician named Hermes was reported to have been found dead on Morro do Cruzeiro, also in the state of Rio de Janeiro. A lead mask was found near Hermes’ body as well.

In the end, it seems likely that whatever was in the consumed capsules probably caused the men’s deaths, whether intentionally or not isn’t clear, though given the men took the time to purchased raincoats (it was raining at the time), one would think they didn’t go to that hilltop intending to leave their body’s behind, else why would they care if they got wet?  Whatever the case, as for the lead masks, these appear to have been worn simply to shield their eyes from the “intense luminosity” of the spirits they were seemingly on the hilltop to see.