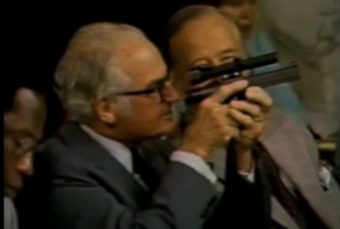 Hollywood spies often have a myriad of amazing devices at their disposal for getting rid of bad guys in a clandestine way.  It turns out, occasionally so do real spies.  Exhibit A: the CIA’s “undetectable” poison dart gun that near silently shot frozen darts comprised of an unspecified, undetectable poison. The individual hit reportedly would at most just feel something like a mosquito bite as the dart penetrated their skin. It would then quickly melt and the poison would do its work, leaving the victim dead of an apparent heart attack, with no detectable evidence of the poison remaining.

The weapon was revealed as part of a broader Senate investigation into intelligence and covert action abuses by the Agency. The disclosure of the full gamut of activities and devices caused Senator Frank Church (D-ID) to conclude that the CIA had become a “rogue elephant rampaging out of control.”

Spurred by the publication of Seymour Hersh’s game-changing article in The New York Times on December 22, 1974, which relayed assassination attempts and covert activities to subvert both foreign governments as well as American antiwar and other dissidents, the Senate formed the Select Committee to Study Governmental Operations with Respect to Intelligence Activities in 1975.

Chaired by Senator Church, during its two years of hearings, the Church Committee, as it came to be known, published 14 reports on a variety of abuses by the CIA, Federal Bureau of Investigation (FBI) and National Security Agency (NSA), as well as others.

In addition, for the CIA, this also included developing weapons such as “a pistol [that] can fire a poison dart 328 feet, kill a man before he knows he has been hit, and leave no clue as to what killed him.”

Part of a program named MK Naomi, established for conducting and managing bacteriological warfare, the poison dart gun was just one of many experiments by the agency, which also included pesticides to ravage crops and on one occasion, using the NYC subway to test out a “trial model” of a biological warfare attack.

The director gave remarkable testimony regarding the development of “toxic agents” at a laboratory at Fort Detrick, MD. Notably, Director Colby testified that only “limited records” remained of these activities, even though the program spanned from 1952-1970.

Among the director’s many extraordinary statements were these from his prepared remarks:

Upon further questioning by the senators, Colby described how the poison dart gun worked:

The Chairman: Does this pistol fire the dart?
Mr. Colby: Yes . . . The round thing at the top is obviously the sight, the rest of it is practically a normal .45 . . . However, it works by electricity. There is a battery in the handle.
The Chairman: So that . . . it fires silently?
Mr. Colby: Almost silently. . . .
The Chairman: And the dart itself, when it strikes the target, does the target know?
Mr. Colby: That depends . . . .There are different kinds of these flechettes [darts] . . . and a special one was developed which potentially would . . . enter the target without perception. . . .
The Chairman: Is it not true . . that the effort not only involved designing a gun . . . but also the toxin itself would not appear in the autopsy?
Mr. Colby: Yes; so there was no way of perceiving that the target was hit . . . .
Senator Tower: Turning to the dart gun, was it ever employed for any purpose by the Agency?
Mr. Colby: I think merely experiments . . . I do not know of any actual use. There is no record of any actual use.