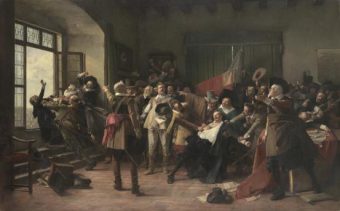 Providing a unique wrinkle to the phrase, “throw the bums out of office,” twice, first in 1419 and again in 1618, frustrated citizens of Prague (today in the Czech Republic) literally threw their leaders out of the upper story windows of their public buildings.

The word for throwing someone or something out of a window, defenestration, is also sometimes used to mean dismissing the authority of a person; and with both Prague defenestrations, both meanings apply.

Each of the two incidents arose, like many disputes, at the intersection of religion and politics. With the first, at this early point in the 15th century there was a fair amount of discontent internally within the Catholic Church; in particular, regular folks were peeved over the relative amount of wealth held by the clergy and nobility compared with the grinding poverty of the peasant class.

In response, radical preachers sprang up, including a relatively popular priest of the Hussite sect named Želivsky. After the Prague town council refused to release some Hussite members that it held prisoner, Želivsky led his followers on a protest march to the town hall, Novomēstská radnice.

During the march, someone from the town hall threw a stone at Želivsky; this lit a fire under the already smoldering mob, which then stormed the building where they found a judge, a burgomaster and 13 council members. Every one of the officials was soon thrown out of an upper story window; those that didn’t die from the fall were killed by the mob below.

The second defenestration came about from a dispute between Protestants and Catholics.

For four decades following Martin Luther’s nailing of his 95 grievances (of which a bitch was not one) to a Wittenberg church door, Catholics and Protestants across Europe engaged in a range of disputes. (Interestingly, while today Luther’s act is often noted to be a rebellious one against the church, at the time it was anything but.  Lacking group email or digital message boards, priests commonly nailed such notices to church doors when they had something to discuss amongst the clergy. In fact, it would appear that Luther did not intend for his work to be debated widely by the general public, simply fodder for discussion among his priestly peers.)

In any event, in 1555, the Catholic Holy Roman Emperor (who also the King of Bohemia, of which Prague was its capital) and his Lutheran princes and nobles settled their dispute (for the time being) with the Peace of Augsburg. Over the next six decades good relations between them led the Bohemian kings to gradually give the nobles ever greater religious freedom and increasing civil and legal powers.

In 1618, those fond feelings came to an abrupt end as the heir to the kingdom, a devout Catholic in favor of the Counter-Reformation (to re-impose Catholicism in Europe) grew in power and succeeded in eventually removing much of that formerly held by the Protestant nobles – to the point that he had their assembly dissolved.

On May 23, 1618, several of these Protestant nobles, understandably infuriated, confronted four Catholic lords at the Bohemian Chancellory, demanding to know the latter’s role in their recent downfall. Two of the Catholic lords, Count Vilem Slavata of Chlum and Count Jaroslav Borzita of Martinice, were proud of their actions and quickly took responsibility, assuming they would just be arrested.

The Protestant lords had other plans. One of the leaders of the group, Count Matyáš von Thurn, stated to the pair as the gathered crowd watched, “You are enemies of us and of our religion, have desired to deprive us of our Letter of Majesty, have horribly plagued your Protestant subjects… and have tried to force them to adopt your religion against their wills or have had them expelled for this reason…” He then stated to the mob, “Were we to keep these men alive, then we would lose the Letter of Majesty and our religion… for there can be no justice to be gained from or by them…”

Shortly thereafter, the mob threw both counts, along with their secretary, Philipus Fabricius, out of the third-story windows; remarkably all three survived the fall, as well as the entire incident – even though there was a crowd of Protestants watching the proceedings. Unlike with the first defenestration, apparently no one at the second thought to finish them off.

Subsequently, two very different versions of the Catholic lords’ survival were told. Catholics later claimed that the Virgin Mary and angels caught them and gently placed them on the ground. In response to this, protestants averred that there was a large pile of fecal matter just under the windows, which cushioned their fall.