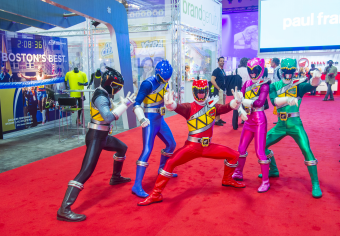 The Power Rangers are a cultural juggernaut that have been a staple of kid’s entertainment for over two decades now- an impressive feat considering the original Mighty Morphin’ Power Rangers series was literally cobbled together from snippets from a popular Japanese series called Super Sentai, more specifically the 16th series of Super Sentai, known in Japan as Kyoryu Sentai Zyuranger.

So how did they cannibalise such a show and re-package it into a different story arc? Enter Israeli-American businessman, Haim Saban.

Sometime in the late 1980s, Saban, who was at the time primarily known for composing soundtracks for various children’s programs, was on a business trip to Japan when he turned on his TV and saw a random episode of Kyoryu Sentai Zyuranger. Despite having absolutely no idea what was going on, Saban was still entertained by the show’s fight scenes; this gave him a novel idea. Why not just take those fight scenes, cobble together a random story around them using new actors, and then package it to kids?

Haim reasoned that kids wouldn’t really care all that much about the plot given that the show contained giant dinosaur robots and fun fight scenes. He also realised that the bright, easily distinguishable characters in each episode could potentially result in lucrative toy sales if the show ever caught on. On top of that, since all the special effects laden battle scenes had already been filmed and produced with masked characters, all one would have to do was record new voice-overs and some very cheap live-action stuff to tie it all together.

With this in mind, Haim hurriedly work-shopped the idea for a pilot episode with the help of his business partner, Shuki Levy, dubbed his version of the show Mighty Morphin’ Power Rangers, and then promptly did nothing with it for about eight years.

You see, despite how inexpensive the show had potential to be, few studios were willing take a chance on such a weird idea. It wasn’t until Saban was able to bend the ear of an executive from Fox Kids, Margaret Loesch, in 1993 (citing the massive toy sales the franchise generated in its native Japan) that the show was greenlit.

Of course, Saban still needed the rights to use the footage from the Japanese show in the first place, so got in contact with the owners of the the Super Sentai brand, Toei Company, Ltd (or TOEI) and Bandai, and negotiated for the rights to use footage from all 50 episodes of Kyoryu Sentai Zyuranger. He then gave the material to a group of editors and writers, tasking them with combing through it all to cobble together as many semi-coherent plots as possible.

The idea here was for around half of each episode to consist of footage from Kyoryu Sentai Zyuranger, with the rest of the time to be filled with live-action footage about high-school students taking part in wacky adventures, more or less in the same vein as Saved by the Bell, only with more ninjas.

As nobody on the writing staff spoke Japanese, they chose to mostly ignore the plot of Kyoryu Sentai Zyuranger they were adapting and just made up their own as they went. To this end, some episodes of Mighty Morphin’ Power Rangers used footage and fight sequences from multiple episodes of Kyoryu Sentai Zyuranger that were edited together to better fit the new story lines. These story lines invariably involved the heroes walking around a lot of non-descript quarries where seemingly all of their battles took place.

The writers also eventually incorporated aspects of other Super Sentai series and then used editing tricks to hide the fact that they weren’t in the same shot as the other heroes. The best example of this being the White Ranger, who was originally from an entirely separate series called Gosei Sentai Dairanger and was played by a 9-year-old boy…

Speaking of the Power Rangers, as an additional cost saving measure, Saban chose to hire unknown actors to play the Rangers. Their pay was reportedly so low, in fact, that three of the original actors left the show in the second series over it, with Austin St. John (the original Red Ranger) once quipping:

I could have worked the window at McDonald’s and probably made the same money the first season. It was disappointing, it was frustrating, it made a lot of us angry.

The actors chosen to play the Power Rangers were hired mostly for their martial arts or athletic ability, and many episodes revolved around them demonstrating their athleticism to make their fighting prowess in the re-purposed Super Sentai footage more believable to the audience. A conscious decision was also made to make the Power Rangers a diverse group of teenager to maximise the show’s appeal.

This sort of casting did cause a few problems, however. For example, many were quick to point out the possible racial connotations of having an African American man and an Asian woman play the Black and Yellow Rangers respectively…

A second, less noticed problem was that in the original Japanese show, the Yellow Ranger (known as the Tiger Ranger in the Japanese version) was played by a man, whereas in the American version, the character was played by the aforementioned Asian woman, Thuy Trang (who tragically died in a car accident at the age of 27 on September 3, 2001). While the gender discrepancy is mostly moot due to the fact the only Japanese footage of the Yellow Ranger shows them in full costume, there are moments where a clearly defined crotch bulge can be seen on the Yellow Ranger during some fight scenes…

In yet another cost saving measure, as Zordon wasn’t in the original Japanese series and thus some special effects were needed for the scenes the character was in, the decision was made to just re-use the same exact footage of him over and over again. This is why you may have noticed that Zordon’s dialogue and his talking head don’t really match up that well in many cases.

Released in 1993 and going against even Saban’s wildest expectations, the nickel-and-dime budget Mighty Morphin’ Power Rangers was a massive hit with kids, generating many millions of dollars in toy and merchandise sales to go along with more direct profits form the show. This left Fox with a rather unique problem- they’d already used all of the footage possible from the 50 episodes of Kyoryu Sentai Zyuranger to create 40 Power Rangers episodes, but now they needed more.

To solve the issue, Fox contacted TOEI directly and worked out a deal to have them create 25 brand new monster costumes, which they used to film a bunch of fight scenes which were then sent over to Fox to be used to create more episodes. TOEI had previously done similar work for Fox at the request of the American writers who needed the occasional new shot to flesh out a story line. Most notable among this work was to film more footage of the Green Ranger, an immensely popular character in the American version that was killed off in the original Japanese show, so had limited footage available.

Mid-way through production of Mighty Morphin Power Rangers, TOEI also sent over the original hero costumes from Kyoryu Sentai Zyuranger, the White Ranger costume, and some of the cheaper monster costumes they had so Fox could film their own fight scenes if they needed to. While Fox and Saban did eventually create some original fight scenes using these props, the costumes were mostly worn by the actors, sans helmet, to flesh out pre-recorded fight scenes.

In the end, Fox and Saban’s company, Saban Entertainment were able to turn the extra footage into 20 additional episodes for the original series, with a little left over to create a handful of episodes for the second series.

Realising the long term potential of their unique relationship, Saban also worked out a deal with TOEI to adapt the next series of Super Sentai, noting that this would allow them to not only create more episodes, but upgrade the Power Rangers’ giant battle robots, presenting an opportunity to create even more toys and merchandise.

From here, a lot of rinsing and repeating has been done to the present day. As for Haim Saban, he’s leveraged the success of Power Rangers, along with using the same basic existing footage formula for a few other shows, to build a nice little entertainment empire, with his personal net worth currently estimated at over $3 billion only about two and a half decades after Power Rangers debuted.