The Man Who Passed SAS Selection With a Shattered Ankle 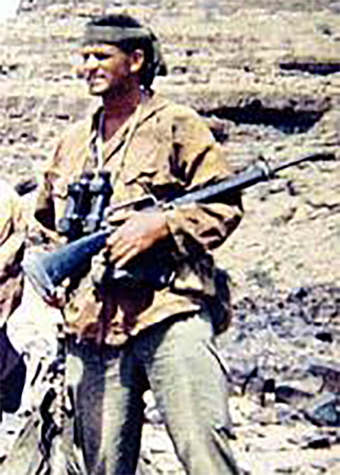 The British Special Air Service, better known simply as the SAS has one of the toughest and most unforgiving selection processes of any military unit on Earth. With a washout rate of around 95%, depending on which source you consult, there are only a handful of individuals who can claim to have completed this fiendishly difficult course, and only one who can claim to have done it twice-once with a broken ankle. This is the story of Donald Large.

An almost mythical figure in SAS history, Donald “Lofty” Large was born in 1930, spending his formative years watching soldiers take part in field exercises during WW2 near his childhood home in the Cotswold’s. Large was pretty much set on joining the military from the moment he could shoot a gun- which according to him, was about age 9. (His dad often took him game hunting.)

Serving with the Army Cadet Force in his early teens and later joining the actual Army at just age 15, as he matured into man, Large’s height swelled to six and a half feet (1.98 metres), earning him the nickname “Lofty” which would stick with him for life.

Over the next five years, Large honed his skills in Germany and Hong Kong, but became frustrated with the lack of action he saw at the various British depots and bases he was stationed at. This culminated in Large requesting a transfer in 1951 to the Gloucestershire Regiment for the sole purpose of fighting in the Korean war, which he nonetheless admitted he thought was a “useless” war.

After being trained in Japan, Large saw combat in Korea, taking part in the Battle of Imjin and then defending a location that came to be known as Gloster Hill in honor of the ferocious defence his regiment mounted during the fight.  During the battle, Large was shot through the shoulder and was ultimately captured along with several other men from his regiment. Despite a bullet and a lot of shrapnel embedded in his body and with only basic medical attention, he then survived a ten day forced march to a POW camp near Chongsung.

During his internment at the camp, Large was shot again, endured the pain of the bullets and shrapnel still embedded in his body, came down with a host of tropical diseases, and generally had a pretty rough time. He would later recount that he learned to cope with the pain by smoking the wild marijuana that grew around the camp and reading the exceptionally few letters from his future wife, Ann (a nanny he met in 1951 while in Hong Kong), that managed to get through to him. (According to Large, it was about 1 in 5 that made it to him, with Ann writing him almost every day.)

Large spent two years in the POW camp going from a muscular 217 lbs (98 kg) on that 6 foot 6 inch frame down to a mere 136 lbs (62 kg) upon his release as part of a wounded prisoner exchange. As a result of two years of inactivity, his injured left arm was almost atrophied to the point of uselessness and most all the rest of his muscle mass was long gone.

The extent of Large’s injuries were such that the Army tried to discharge him on medical grounds upon his return, but Large made it known that his intent was to regain the full use of his now withered limb and weakened body and to return to active service.

Four years later, during which time Large had functioned variously as an instructor, a military police officer and a quartermaster for the Army, all while enduring daily excruciating pain as he slowly built back the muscle he’d lost in his arm, Large was once again fighting fit.

Almost as soon as he was declared fit to return to service, he volunteered to join the SAS. When asked why he wanted to volunteer, Large responded simply: “I’m tired of all the bullshit.” He had grown to resent the monotony of daily drills and military bureaucracy and wanted to return to actual soldiering.

By all accounts, Large breezed through the SAS’s notoriously difficult selection course, which was specially designed to test the limits of a given volunteers’ fitness and mental toughness, with his only real issue being his crippling fear of heights- kind of a problem given that the regiment was called the Special Air Service.

As recounted by one of Large’s cohorts in the SAS, his fear of heights came to a head when he was required to learn how to parachute from a plane and it became apparent his size was going to cause issues. You see, Large weighed almost 240 pounds (108 kg) at this time, which, combined with the equipment he had to carry, meant he’d fall faster and hit the ground harder than other commandos.

This was even more of an issue at this time because the parachutes were specifically designed to ensure a typical sized soldier would fall relatively fast anyway to avoid being a slow moving target for any enemies on the ground. These now antiquated parachutes also had somewhat limited control, so falling fast also helped ensure the soldier wouldn’t land too far away from the target zone.

Another issue was that Large was so, well, large that he couldn’t comfortably jump out of a plane. In fact, he nearly died when he, in an attempt to squeeze out of a plane’s fuselage early in his training, became unbalanced (due to the heavy load on his back and having to bend so far down to exit the plane) and did an awkward forward roll out of the aircraft.  Things became dire when an equipment container attached to his legs (along with his legs) became tangled in his parachute’s cords as he plummeted to the ground.

Not for nothing is Large a legend in the SAS, however.  Keeping his composure while the ground rushed up at him, despite Large being more or less in an upside down position with his parachute deployed, he managed to detach the equipment container from his leg, and kick that leg free of the parachute lines.  Using his now freed leg, he then kicked the tangled lines off his other leg, which resulted in his body swinging around the right way up and his parachute fully deploying, reportedly very shortly before he hit the ground.

Despite these setbacks, Large did complete his parachute training to a satisfactory degree, though it was noted in his records that he was: “not suited to parachuting – either in size or inclination.”

But here’s where things get ridiculous- after completing what was, at the time, arguably the most grueling selection course of any military unit on Earth, Large crashed his motorbike, shattering his ankle and injuring his foot in the process.  Thus, to prove he was still capable, he had to pass the whole thing again.

Large spent four weeks recovering and ended up going through the selection process again; this time wearing an oversized boot on his injured foot to account for the bandages and swelling.

Knowing that he was able to pass the SAS’s training course twice, the second time while injured, it’s probably no surprise that Large had no real problems serving with the unit, taking part in countless combat and reconnaissance missions across the world. During one mission, Large cemented his reputation as a man you wouldn’t want to mess with by punching out a donkey because it and its owner annoyed him. The incident occurred while he was stationed in Oman, helping to suppress a rebellion in 1958. Large stated of this,

In a slightly more humane display, while in Indonesia during Operation Claret, Large and an SAS patrol were sneaking through the jungle looking to kill Colonel Leonardus Moerdani, the commander of the Indonesian Armed Forces.  However, when they finally found him passing by on a river boat, Large called off the hit.  Why? There was a female civilian on the boat. He stated of this,

There could have been other women and there could have been children on the boat. And we don’t do that sort of target, so … it went. And it was in fact the very man we’d been looking for for three months: Colonel Moerdani of the Indonesian paracommando unit, and he was on the end of my rifle and I let him go – but … you can’t blat women and kids.

Large stayed with the SAS after retiring from active duty, training the next generation of SAS commandos before retiring in 1973 to enjoy time with his wife. For the most part, Large’s final years were uneventful (at least compared to his antics as a young man) though he did notably return to the jungles of Borneo in 2003 as part of a documentary about his regiment’s exploits.

Large passed away at the age of 76 in 2006 after struggling with Leukemia for a few years. Today, a small memorial to this larger than life man exists in the Allied Special Forces Memorial Grove in the form of a bench, donated by his comrades in 2012.