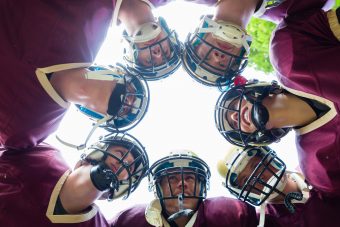 Prior to the twentieth century, American football teams tended to call their plays via a quarterback simply giving signals while the team either stood in more or less a generic near-set position or back from the line a bit as the quarterback called out what they’d do next. So where did the idea of standing well behind the line of scrimmage in a huddle come from?

While there are no contemporary news reports or other definitive primary documents from the time period to support the story, it is generally claimed that quarterback Paul Hubbard of Gallaudet University invented the huddle sometime between 1892 and 1895, though if so, perhaps after 1892 as Hubbard wasn’t team captain until 1893.

For the uninitiated, Gallaudet University is a school formed to educate deaf and hard of hearing individuals. Hubbard, like the rest of his teammates, relied on American Sign Language to communicate game strategies and specific plays, something easily interpreted by opposing teams intent on gaining the upper hand, especially teams that also consisted of deaf and hard of hearing players and coaches.

The two general ways around this problem, whether signing or verbally shouting out, are to code the signals or to simply block the other team from being able to see them. Hubbard supposedly chose the latter, instructing his teammates to form a circle around him to discuss the plays.

As to how the huddle spread to other teams (and even other sports), this isn’t any clearer than the commonly touted Hubbard origin story, at least as far as hard, documented evidence is concerned. It is often claimed to have spread via deaf and hard of hearing students taking it to other schools after graduating from Gallaudet University, with some of them going on to teach or coach at said other schools for the deaf.

In fact, it is often stated that Hubbard himself did this. After leaving Gallaudet in 1896, he returned to his hometown of Olathe, Kansas as a teacher at the Kansas School for the Deaf. In 1899, he started the school’s football program and coached for many years, with it claimed he taught his players the huddle.  However, Hubbard himself doesn’t seem to have ever said he did this and there is no contemporary evidence backing up that the team at the Kansas School for the Deaf used the huddle under Hubbard.  Of course, if Hubbard really did use the huddle previous to this, presumably he would have brought the practice over to his new team.

As for an alternate origin story, it is noted by Dr. I. H. Baker in the 1945 work Football: Facts and Figures that the huddle was used by the University of Georgia in 1896 in a game against Auburn University. Baker’s claim here is in turn derived from the History of Southern Football, written by Fuzzy Woodruff in 1928. In it, Woodruff gives an account of the game in question and describes a huddle being used. (I wasn’t able to find a copy of the book nor a transcript of the statement in question to see if Woodruff was simply basing this account off of his own memory of events some 32 years before or something a little more concrete.)

Unfortunately, contemporary documented evidence seems to fail us on both Hubbard and Woodruff’s claims, though there is no reason to think either were making anything up here, and we do know from a 1942 letter from one of Hubbard’s former classmates that Hubbard was being credited as inventing the huddle by a news report concerning Hubbard’s retirement. In the letter, one Herbert C. Merrill writes to Hubbard,

The item ascribes the origin of the football ‘huddle’ to you. It must have been during the time that the College had that scrub team that made all the teams around Washington, including the Naval Academy, look silly.

However, it’s not completely clear from the letter whether Merrill, who was valedictorian of his graduating class at Gallaudet in 1896, himself is corroborating Hubbard’s claim- that Merrill remembers Hubbard using the huddle- or was simply pointing out the news report to Hubbard. False memories being extremely prevalent, as much as we humans don’t like to admit it, and a near half a century separating the letter from the events in question, even if he was more explicit about it, this wouldn’t really help us much either way in being more definitive. Also very unfortunately, it isn’t clear what news report Merrill was referencing to see what they were basing their claim on to perhaps shed a little more light on the issue.

So that’s the commonly touted origin story. But when did the huddle first start being recorded in first-hand contemporary reports that have survived to today?

During the game in question, Oregon State, coached by Bill Hargiss, found themselves with a little problem on their hands. One of the Oregon State players in that game, Jack Foster, later recalled the issue,

As I remember, in the first half of that game, the U. of W. team was reading our signals as the quarterback called them, and was stopping us cold on nearly every play. So during halftime Coach Hargiss told us to whisper the play out of hearing of the defensive team, and then our plays began to work. We did not use it on every play.

Famed Seattle Post-Intelligencer editor Royal Brougham noted of this then bizarre move in the game, “I remember how puzzled the writers were when the Oregon… team lined up in a group five or ten yards behind the line like they were holding a prayer meeting or something.”

Hargiss, however, did not claim to have invented the huddle, simply claiming he was the first to use it in a college game as far as he was aware. As to where he got the idea from, he stated,

I was refereeing a high school game out there and it was one of those close grudge, battles where the crowd cheered loudly and the band played the same way. The offensive team got down to a do-or-die play and the boys couldn’t hear the quarterback’s signals. So he called them into a huddle to give ’em the play. I thought a lot about that, and I experimented with it at Oregon State. Other coaches criticized it because they said it cost time. But I put a stop-watch on it, and it often was faster than the signal calling system.

With the huddle seemingly being a success in 1918, Hargiss continued to use it on occasion and later brought it to Emporia State University in Kansas in 1920. Within a year of that, famed football coach Bob Zuppke of the University of Illinois at Urbana–Champaign, who is sometimes credited as inventing the huddle, started using it. Notably, columnist Frederick Meagher in an article published in The Frat in September of 1946 claimed Zuppke didn’t himself say he invented the huddle, nor that he got it from Hargiss, but that “Zuppke admits he took it from an un-named deaf football team he saw somewhere.”

Whatever the case, soon after Hargiss and Zuppke pioneered the huddle in college football, many teams at every level of the sport began adopting it.

In the century since, the huddle has become a staple of American Football and certain other sports, though today there are some teams that don’t always hold to it. For instance the Philadelphia Eagles have been known for their no-huddle offense since 2013 when Chip Kelly became coach. It’s thought by those who advocate for skipping the huddle, usually in conjunction with a hurry-up offense, that it allows the offense to alter the pace of the game in a way that gains an advantage over the defense. The general idea here is that when the offense skips the huddle, it is possible to force no significant break between plays, or at least force the defense to get in position before they may have otherwise been ready, even if the offense takes it time actually snapping the ball.