Why Do Blind People Wear Sunglasses?

Jamie M. asks: Why do a lot of blind people wear sunglasses indoors? 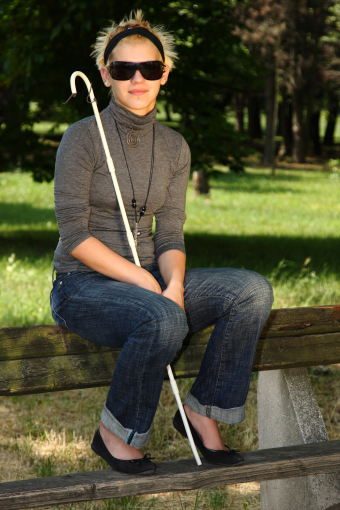 One of the most common questions we’ve been asked over the years, right up there with how blind people know they are done wiping after going #2, is why blind people wear sunglasses. After almost seven years of being asked this question, we suppose it’s high time we answered it.

It should first be noted that, contrary to what many seem to think, not all blind people are completely blind. In fact, the vast majority of legally blind people can see at some level, just very poorly. For reference, the American Foundation for the Blind defines blindness as:

a level of vision loss that has been legally defined to determine eligibility for benefits. The clinical diagnosis refers to a central visual acuity of 20/200 or less in the better eye with the best possible correction, and/or a visual field of 20 degrees or less. Often, people who are diagnosed with legal blindness still have some usable vision.

(And if you’re wondering, see: How the 20/20 Vision Scale Works) This “usable vision” point is important to note because it means that these individuals, like their better sighted brethren, can also be distracted or otherwise disoriented by bright light, with a pair of sunglasses being an easy solution to the problem. That said, while some blind people opt to wear common store bought sunglasses to filter out bright and ultraviolet light, others need to wear specially made eyeshields that can filter specific colors of light their eyes are sensitive to.

On the UV light note, much like those of the sighted persuasion, protecting the eyes from UV radiation is of tantamount importance for the blind, as it’s exceptionally dangerous to the unshielded eye. For example, overexposure to UV light can potentially cause everything from cataracts to inflammation of the cornea (photokeratitis) or conjunctiva (photoconjunctivitis). These latter two are essentially a sunburn of the eye and are every bit as painful as you might expect from that statement.

In some cases, excessive UV exposure to the eye can even eventually result in certain forms of ocular cancer. Because many blind individuals have little, or in some cases no, natural ability to detect whether their eyes are being bombarded with a bright light source potentially giving off a lot of UV radiation, like the Sun, and thus aren’t able to know when their eyes need protecting from said light, they are more at risk of falling victim to the various afflictions associated with it.

Closer to Earth, some blind people opt to wear sunglasses everywhere they go to protect their eyes from physical dangers like low-hanging branches, small objects blown by the wind, open cupboard doors, etc.

Another, often overlooked, reason that blind people choose to wear sunglasses is to signify that they’re blind at a distance. For example, the white cane carried by many blind people is noted as being as much a signal to others as it is a tool for a blind person. In this sense, sunglasses in some settings, such as when worn indoors, serve as an easily observed, popularly known cue for visual impairment at a distance.

Similarly some blind people wear sunglasses for the benefit of others. As explained by this blind gentleman, sighted people often find it uncomfortable or awkward to converse with a blind person as it’s potentially difficult or impossible for the blind individual to maintain proper eye contact. Wearing dark sunglasses partially gets around the problem. In that case, the blind person simply needs to look in the general direction of the person talking to make it seem like they are making normal eye contact.

A more personal reason some blind people opt to wear sunglasses is to hide certain deformities. As discussed by blind author Belo Cipriani,

After being sightless for a few months, I soon met people whose eyes were scarred, shrunken or deformed in some way. However, they still had some level of vision — whether it was light or movement perception — and prosthetics would eliminate useful sight. Still, at social settings, they keep their eyes from the public.

He goes on to note that some blind people feel a desire to “look the part”, donning glasses to conform to the accepted stereotype of a blind person wearing sunglasses. He states of this, “I often found people in public telling me that I was faking it. I was not comfortable enough with my blindness to have some witty reply, and, at that time, it was easier to conform.”

So to sum up, while reasons vary from person to person, when stepping back a bit from the specifics of the answer, in a very general sense, blind people mostly have historically worn sunglasses for the same basic reasons sighted people do- to protect their eyes and for aesthetic reasons.  It’s just that blind people’s eyes often need a bit more protecting and there are additional visual reasons for many blind individuals to wear sunglasses than just looking cool or fashionable.

So that’s historically; what about the emerging future? As technology has advanced recently on the mobile computing front, blind individuals are starting to see new reasons to wear some form of glasses. For instance, in 2015 Vision Technologies began beta testing smart glasses that have a camera and headphones built into them.  The device, in conjunction with the individual’s mobile phone, continually scans the environment and updates the wearer audibly on anything important.  For instance, the software includes facial recognition algorithms that tell the wearer if the camera sees someone the wearer has stored in its memory as an individual they know. It can even be set to remind the wearer how they know the person, along with other pertinent details about them.

Just as practically, it also recognizes objects like a refrigerator or a bus stop, letting the individual know if they are standing near one. On this latter point, it can even read markers off an approaching bus so the wearer knows if the bus is the one they want to get on. Beyond this, it can read any text from a product label, book, sign or the like, among many other features. Needless to say, as technology and software continues to rapidly progress, this sort of thing is likely to see more and more blind people wearing some form of smart glasses, whether of the tinted variety or not, everywhere they go.