August 30, 2016 Melissa
Mark Y. asks: Why were people who made alcohol during prohibition called bootleggers? 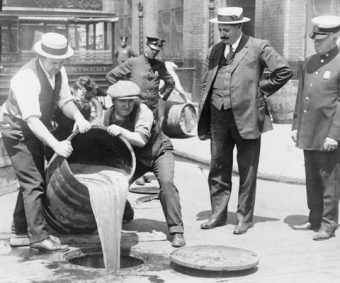 Although Prohibition officially began on January 16, 1920, the impetus for banning the production, sale, importation and transportation (though not the consumption) of alcohol had been brewing for decades before. Part of a string of reforms introduced by Progressives, Protestants and other activists to cure all of society’s ills, limiting the consumption of alcohol was thought by many to be the cure for domestic violence, poor health, loose morals and, of course, public drunkenness.

The advocates of Prohibition even managed to convince many heavy drinkers; after all, sacrificing alcoholic drinks was a little thing compared to creating a better society.  Will Rogers often joked about this: “The South is dry and will vote dry. That is, everybody sober enough to stagger to the polls.”

Not just a 20th century phenomenon, many localities and states had been prohibiting the sale of liquor long before, including a ban in Maine from 1851 to 1856, and in Kansas, which banned the sale of alcohol in 1881 and didn’t repeal it for hard liquor until 1948.

Moreover, during the progressive movement of the latter half of the 19th and first part of the 20th centuries, even in places where alcohol remained legal, in certain social circles openly drinking alcohol was simply “not done.”

To get around this problem, some took to keeping a flask discreetly on their persons, and one convenient place was in the top part of a tall boot, which had been used since time immemorial as a place to stash all kinds of contraband (think knives and guns). The “leg of a tall boot,” has been called a boot-leg since the 17th century, and the term was commonly in use during the mid-1800s. 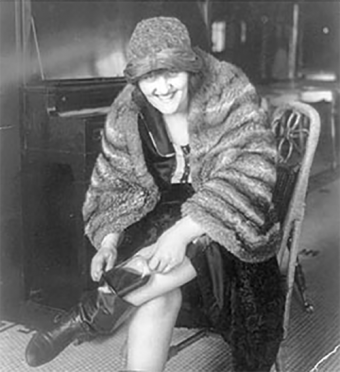 By the end of the 1800s, this idea of concealing something illicit, like alcohol, in one’s boot-leg led to the term being extended to those who made and/or transported alcohol illegally. The first known instances of “bootlegging” being applied to these individuals started popping up in Kansas within a decade of the state’s prohibition laws being established. For instance, in the Biennial Report of the Attorney-General of Kansas, Volume 1 (1889):

The prohibitory law in our county is as well enforced as could reasonably be expected; in fact, there have been no open violations of the law for many years, that I can remember. The “bootlegger” now and then infests our county, but he is ordinarily short-live…

In 1890, Anderson County, Kansas Judge B.R. Porter noted in The Economics of Prohibition,

The saloon in Kansas has gone and gone forever; we know that we are better off in every way, morally, financially, and religiously. ‘Tis true liquor is brought in from Kansas City and other points in Missouri, and it is used slyly. Sometimes men sell it on the sly. This business is called ‘bootlegging.’  At our last term of the District Court one man was convicted for selling in this way, and he was fined $100 and given a jail sentence of thirty days.

The term “bootlegging” saw a huge surge in popularity once Prohibition spread nation-wide in the United States with the 18th Amendment taking effect in early 1920.  Soon after, the term was generalized to no longer just reference things related to illegal alcohol, but all manner of items, even “bootleg babies” (Daily Express March 5, 1929), referring to a smuggled baby.  The following year Variety noted in an article published on April 10, “There is almost as big a market for bootleg disk records as there is for bootlegged books.”  This general sense of the term has popularly endured to today.

Back to Prohibition- an interesting period in American history, the push and pull between the purveyors of alcohol (who ranged from small-time moonshiners to gangsters like Al Capone), really came into its own in the 1920s after the passing of the Volstead Act. Providing for a police force of federal agents, the Bureau of Internal Revenue (which eventually became the Bureau of Prohibition) desperately worked against the bootleggers to keep the country sober.

In order to get their product around the Revenue forces (sometimes called revenue agents or revenuers) to their parched consumers, illegal producers and distributors tried a number of tactics, including “suping” up their cars’ engines and strengthening their suspensions to be able to outrun the federal agents. 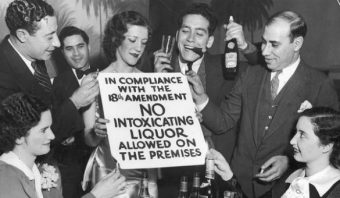 Although the Bureau had annual budgets in excess of $10 million (about $140 million today) during Prohibition, the revenuers apparently faced a battle they simply could not win, and alcohol consumption (the reduction of consumption of which was the stated purpose of Prohibition) actually went up 39% from 1919 to 1929. Moreover, while prior to the ban Americans split their consumption about 50-50 between less potent beer and stronger liquors (e.g. whiskey), during Prohibition, as beer was difficult to produce and transport discretely, relatively little was made and many drank strong spirits and fortified wines instead.

As for the wealthy, by and large they simply stored up massive quantities of various alcoholic beverages before the 18th Amendment came in effect. In fact, President Woodrow Wilson himself is known to have had his own very large supply of alcohol stored at the White House. After he left office in 1921, he had to have it transported to his home.  Likewise, President Warren G. Harding had to move his stockpile from his home to the White House when he took office that same year.  Historian Lizabeth Cohen noted of this, “A rich family could have a cellar-full of liquor and get by, it seemed, but if a poor family had one bottle of home-brew, there would be trouble.”

In addition to the massive switch to harder liquors, some of this “bathtub gin” was further strengthened with “dangerous adulterants,” that occasionally proved deadly; and, in fact, between 1920 and 1925, the number of deaths each year from tainted liquor quadrupled to 4,154.

Not just a problem with quality control or experimentation among bootleggers, the U.S. government itself intentionally poisoned various alcohol supplies that would later be distributed to its citizens, resulting in the deaths of over 10,000 Americans.  Surprisingly, when the death-tolls came to the public’s attention, rather than be outraged en masse, attitudes were mixed on whether or not the program should be canceled or ramped up. (This was an era when eugenics was a hugely popular concept throughout much of the developed world, even supported by the likes of Winston Churchill. The popularity of eugenics reached its crescendo just before WWII, dying out after for obvious reasons, though very minor elements of it are still widely practiced today.)

Essentially, some felt that the people who were drinking the illegal alcohol got what they deserved and some found it to be a net benefit that these individuals were dying off, helping to remove those who drank from society. On that note, conspiracy theorists even posited the poisoning program was a national experiment on exterminating members of society that the government felt were undesirable as American citizens, noting that it was really only the poor who were affected by this tainted alcohol supply program.

The Chicago Tribune stated of all this in 1927: “Normally, no American government would engage in such business. … It is only in the curious fanaticism of Prohibition that any means, however barbarous, are considered justified.”

Besides the deaths of thousands as a result of tainted alcohol, rampant illegal bootlegging, and a rapid rise in per capita alcohol consumption, criminal activity during Prohibition also increased in the general case, with thefts and burglaries increasing by 9%, and homicides and assaults by 13%. Whether having anything to do with Prohibition or not, this was all making it readily apparent that banning alcohol wasn’t having the intended positive affect on society, nor stopping people from drinking. Ironically, public drunkenness and disorderly conduct arrests increased by 41%, and arrests for drunk driving increased by 81%.

Finally, on December 5, 1933, Prohibition officially ended when Utah became the 36th state to ratify the 21st Amendment, originally proposed by Congress on February 20, 1933.  Once ratified, this constitutional amendment repealed the 18th Amendment.

When President Roosevelt signed the Cullen-Harrison Act, which amended the Volstead Act to allow the manufacturing and sale of certain kinds of alcohol, he made the now famous remark, “I think this would be a good time for a beer.”  One day later, Anheuser-Busch, Inc, sent a case of Budweiser to the White House as a gift to the President.