The First Thing Eaten on the Moon, What Armstrong Said Directly After His Historic “Small Step” Line, What It Would Take to Stop the Earth Orbiting the Sun and More in Yet Another 14 Quick Facts 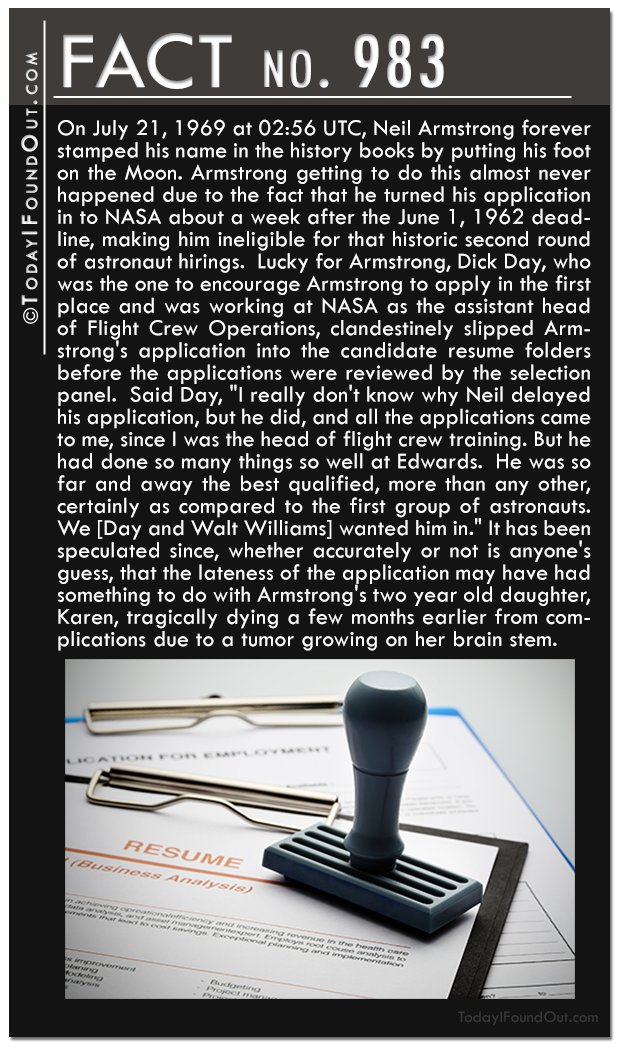 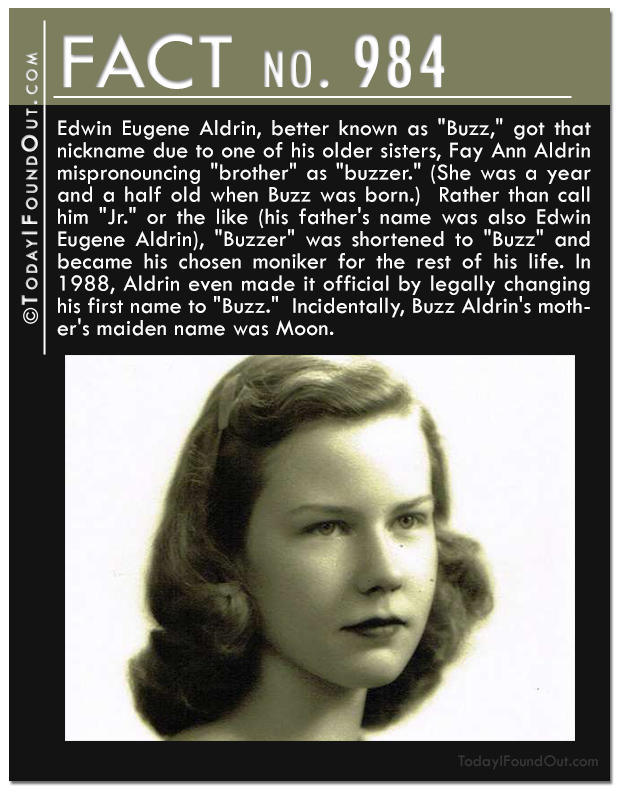 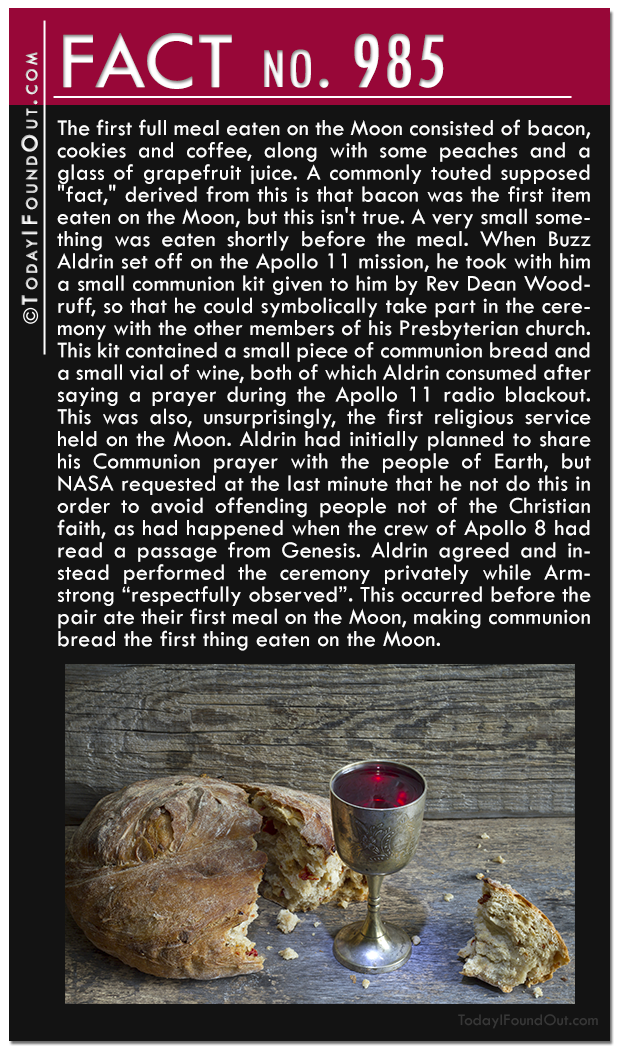 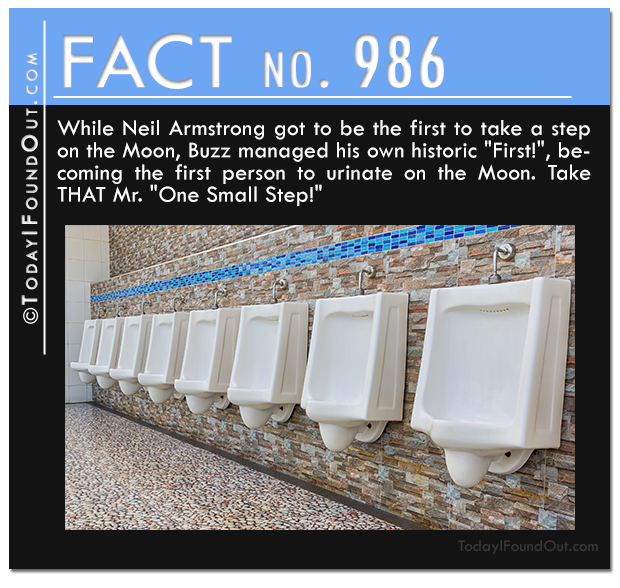 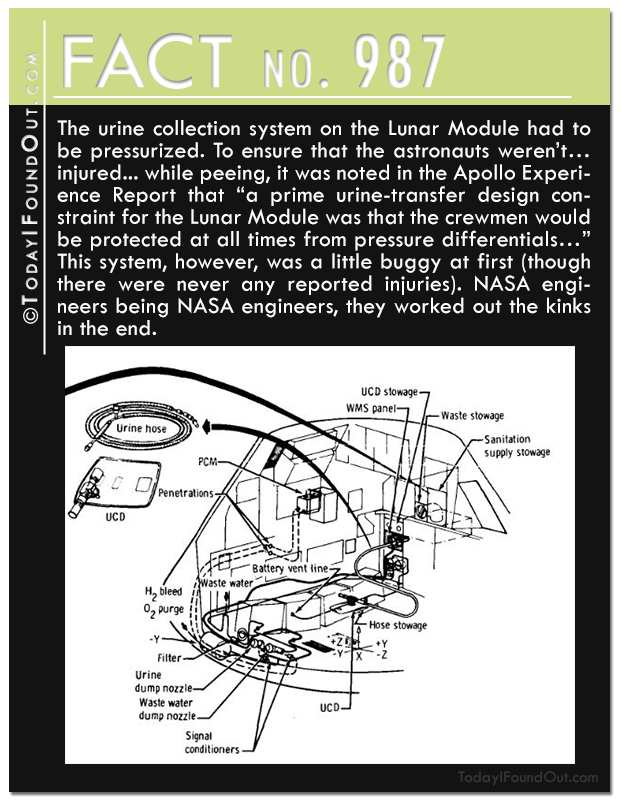 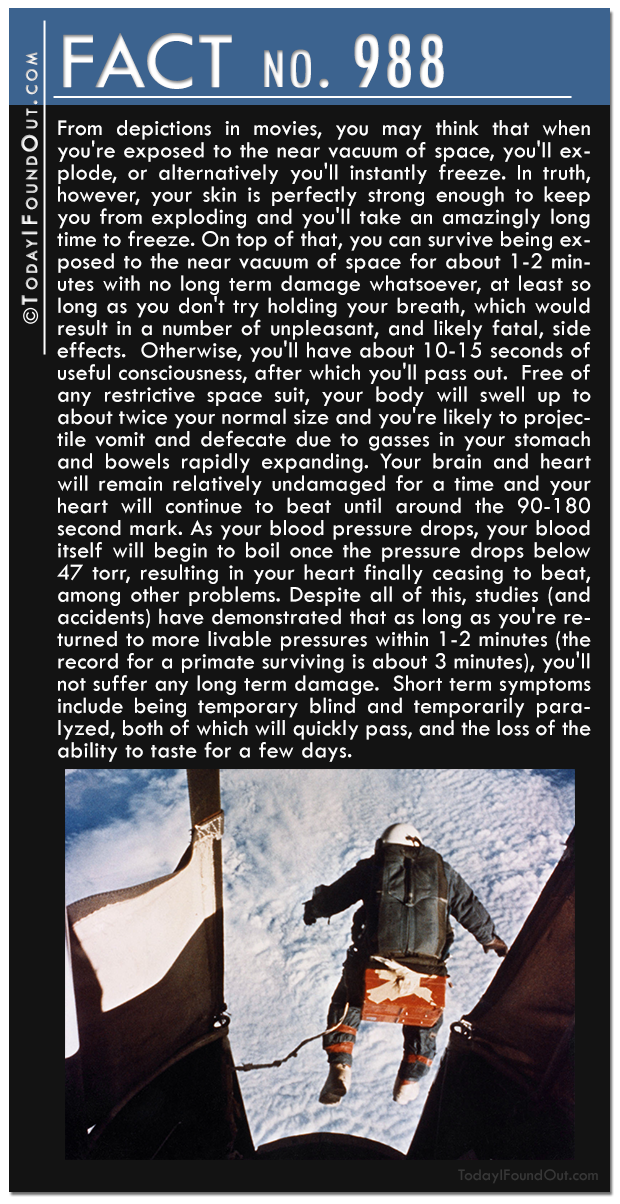 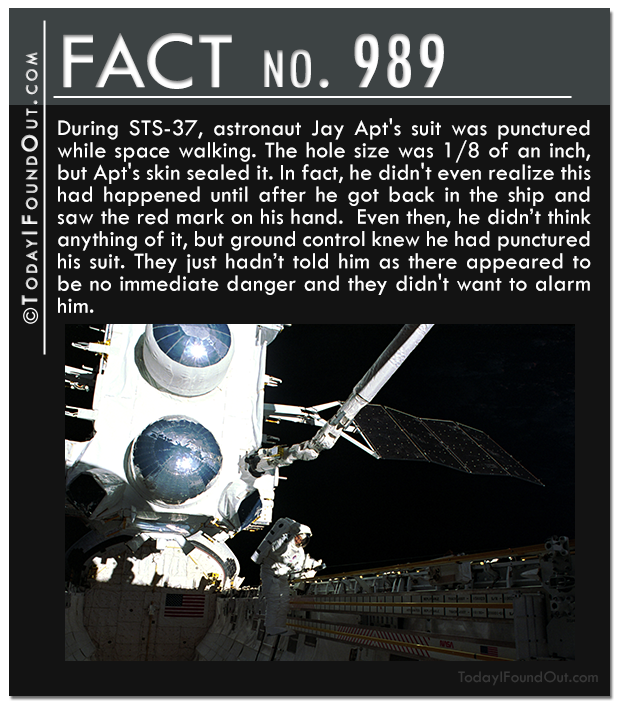 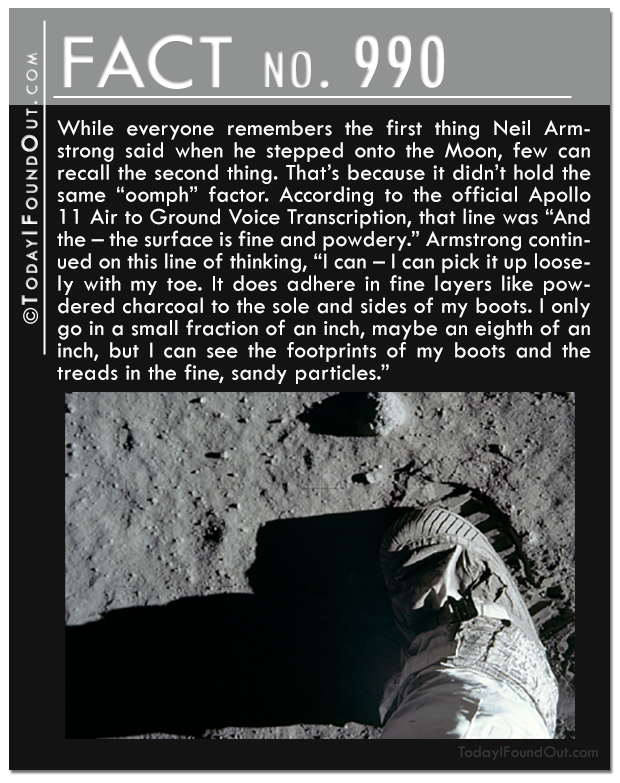 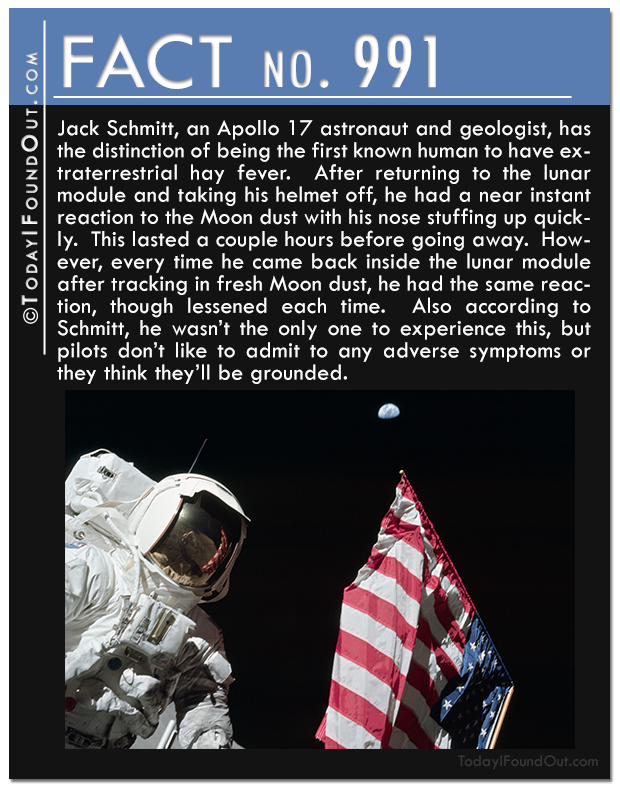 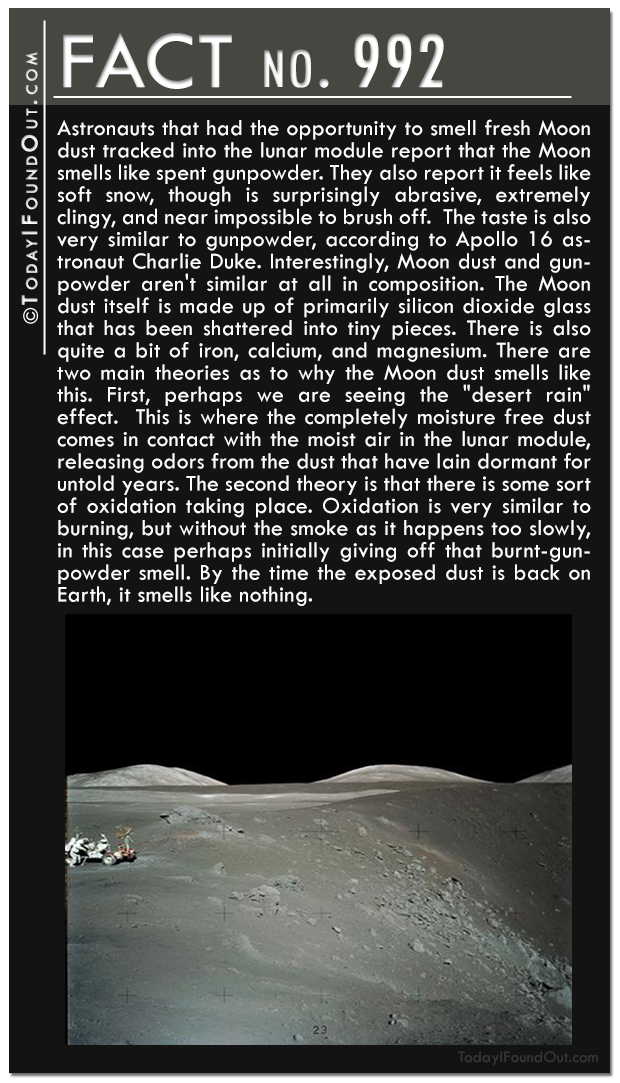 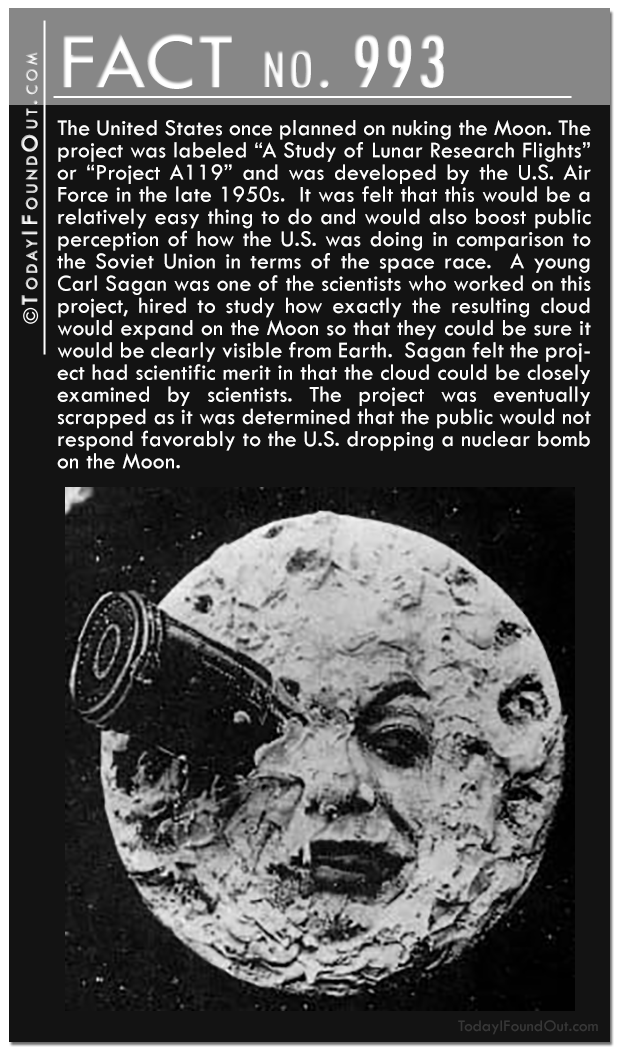 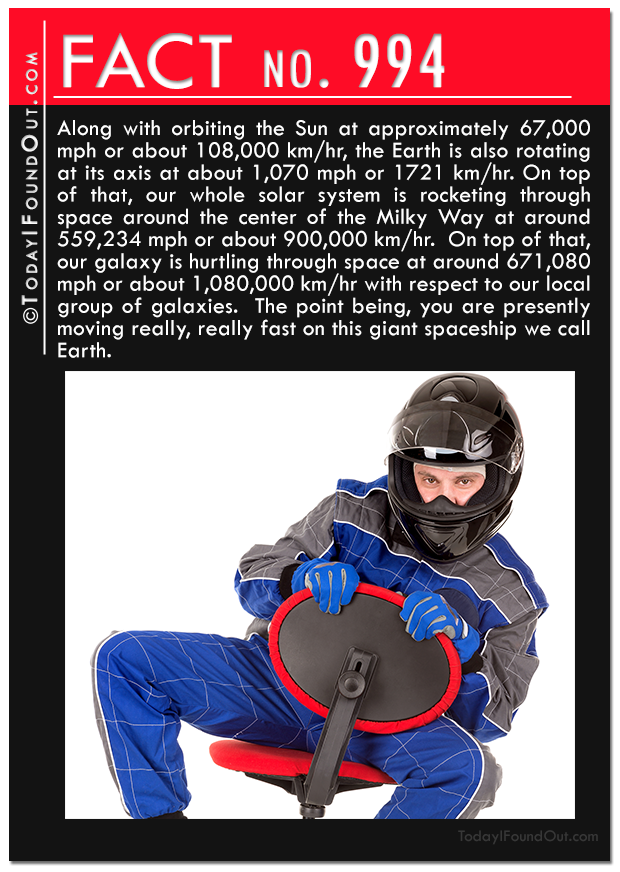 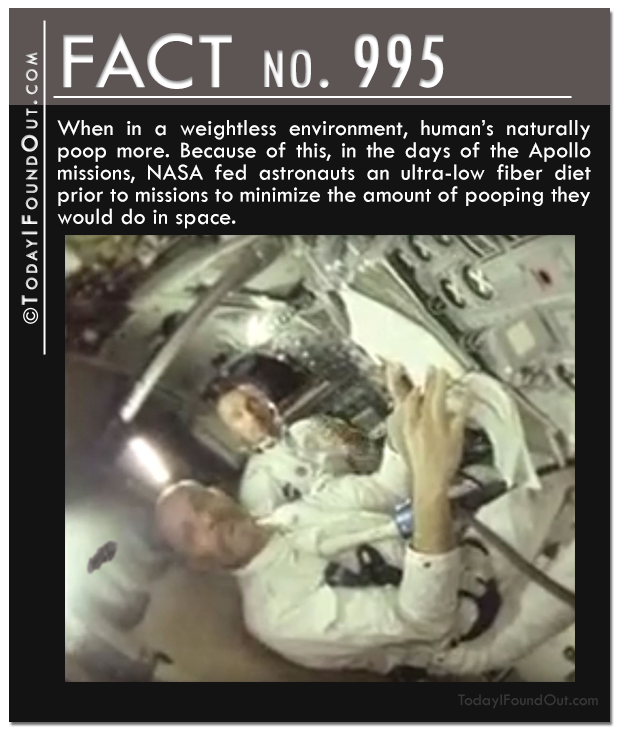 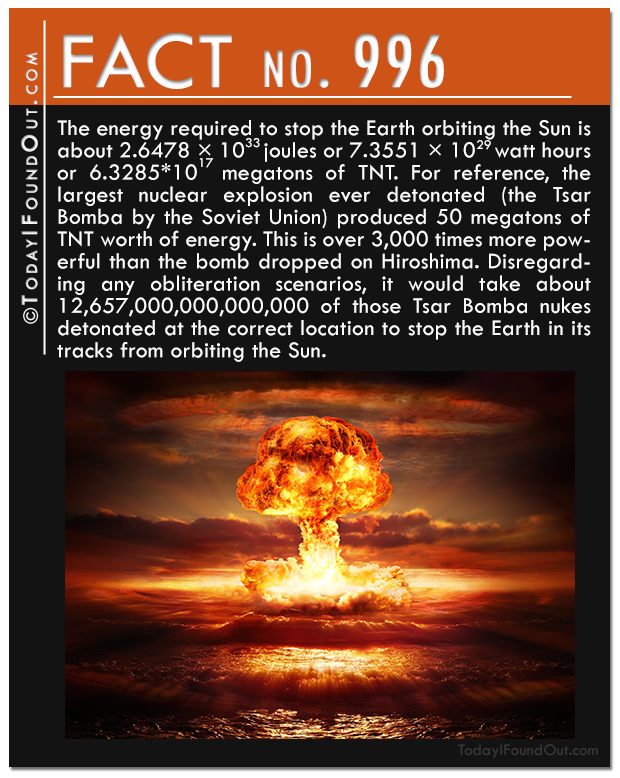 983) On July 21, 1969 at 02:56 UTC, Neil Armstrong forever stamped his name in the history books by putting his foot on the Moon. Armstrong getting to do this almost never happened due to the fact that he turned his application in to NASA about a week after the June 1, 1962 deadline, making him ineligible for that historic second round of astronaut hirings.  Lucky for Armstrong, Dick Day, who was the one to encourage Armstrong to apply in the first place and was working at NASA as the assistant head of Flight Crew Operations, clandestinely slipped Armstrong’s application into the candidate resume folders before the applications were reviewed by the selection panel.  Said Day, “I really don’t know why Neil delayed his application, but he did, and all the applications came to me, since I was the head of flight crew training. But he had done so many things so well at Edwards.  He was so far and away the best qualified, more than any other, certainly as compared to the first group of astronauts.  We [Day and Walt Williams] wanted him in.” It has been speculated since, whether accurately or not is anyone’s guess, that the lateness of the application may have had something to do with Armstrong’s two year old daughter, Karen, tragically dying a few months earlier from complications due to a tumor growing on her brain stem.

984) Edwin Eugene Aldrin, better known as “Buzz,” got that nickname due to one of his older sisters, Fay Ann Aldrin mispronouncing “brother” as “buzzer.” (She was a year and a half old when Buzz was born.)  Rather than call him “Jr.” or the like (his father’s name was also Edwin Eugene Aldrin), “Buzzer” was shortened to “Buzz” and became his chosen moniker for the rest of his life. In 1988, Aldrin even made it official by legally changing his first name to “Buzz.”  Incidentally, Buzz Aldrin’s mother’s maiden name was Moon.

985) The first full meal eaten on the Moon consisted of bacon, cookies and coffee, along with some peaches and a glass of grapefruit juice. A commonly touted supposed “fact,” derived from this is that bacon was the first item eaten on the Moon, but this isn’t true. A very small something was eaten shortly before the meal. When Buzz Aldrin set off on the Apollo 11 mission, he took with him a small communion kit given to him by Rev Dean Woodruff, so that he could symbolically take part in the ceremony with the other members of his Presbyterian church. This kit contained a small piece of communion bread and a small vial of wine, both of which Aldrin consumed after saying a prayer during the Apollo 11 radio blackout. This was also, unsurprisingly, the first religious service held on the Moon. Aldrin had initially planned to share his Communion prayer with the people of Earth, but NASA requested at the last minute that he not do this in order to avoid offending people not of the Christian faith, as had happened when the crew of Apollo 8 had read a passage from Genesis. Aldrin agreed and instead performed the ceremony privately while Armstrong “respectfully observed”. This occurred before the pair ate their first meal on the Moon, making communion bread the first thing eaten on the Moon.

986) While Neil Armstrong got to be the first to take a step on the Moon, Buzz managed his own historic “First!”, becoming the first person to urinate on the Moon. Take THAT Mr. “One Small Step!”

987) The urine collection system on the Lunar Module had to be pressurized. To ensure that the astronauts weren’t… injured… while peeing, it was noted in the Apollo Experience Report that “a prime urine-transfer design constraint for the Lunar Module was that the crewmen would be protected at all times from pressure differentials…” This system, however, was a little buggy at first (though there were never any reported injuries). NASA engineers being NASA engineers, they worked out the kinks in the end.

988) From depictions in movies, you may think that when you’re exposed to the near vacuum of space, you’ll explode, or alternatively you’ll instantly freeze. In truth, however, your skin is perfectly strong enough to keep you from exploding and you’ll take an amazingly long time to freeze. On top of that, you can survive being exposed to the near vacuum of space for about 1-2 minutes with no long term damage whatsoever, at least so long as you don’t try holding your breath, which would result in a number of unpleasant, and likely fatal, side effects.  Otherwise, you’ll have about 10-15 seconds of useful consciousness, after which you’ll pass out.  Free of any restrictive space suit, your body will swell up to about twice your normal size and you’re likely to projectile vomit and defecate due to gasses in your stomach and bowels rapidly expanding. Your brain and heart will remain relatively undamaged for a time and your heart will continue to beat until around the 90-180 second mark. As your blood pressure drops, your blood itself will begin to boil once the pressure drops below 47 torr, resulting in your heart finally ceasing to beat, among other problems. Despite all of this, studies (and accidents) have demonstrated that as long as you’re returned to more livable pressures within 1-2 minutes (the record for a primate surviving is about 3 minutes), you’ll not suffer any long term damage.  Short term symptoms include being temporary blind and temporarily paralyzed, both of which will quickly pass, and the loss of the ability to taste for a few days.

989) During STS-37, astronaut Jay Apt’s suit was punctured while space walking. The hole size was 1/8 of an inch, but Apt’s skin sealed it. In fact, he didn’t even realize this had happened until after he got back in the ship and saw the red mark on his hand.  Even then, he didn’t think anything of it, but ground control knew he had punctured his suit. They just hadn’t told him as there appeared to be no immediate danger and they didn’t want to alarm him.

990) While everyone remembers the first thing Neil Armstrong said when he stepped onto the Moon, few can recall the second thing. That’s because it didn’t hold the same “oomph” factor. According to the official Apollo 11 Air to Ground Voice Transcription, that line was “And the – the surface is fine and powdery.” Armstrong continued on this line of thinking, “I can – I can pick it up loosely with my toe. It does adhere in fine layers like powdered charcoal to the sole and sides of my boots. I only go in a small fraction of an inch, maybe an eighth of an inch, but I can see the footprints of my boots and the treads in the fine, sandy particles.”

991) Jack Schmitt, an Apollo 17 astronaut and geologist, has the distinction of being the first known human to have extraterrestrial hay fever.  After returning to the lunar module and taking his helmet off, he had a near instant reaction to the Moon dust with his nose stuffing up quickly.  This lasted a couple hours before going away.  However, every time he came back inside the lunar module after tracking in fresh Moon dust, he had the same reaction, though lessened each time.  Also according to Schmitt, he wasn’t the only one to experience this, but pilots don’t like to admit to any adverse symptoms or they think they’ll be grounded.

992) Astronauts that had the opportunity to smell fresh Moon dust tracked into the lunar module report that the Moon smells like spent gunpowder. They also report it feels like soft snow, though is surprisingly abrasive, extremely clingy, and near impossible to brush off.  The taste is also very similar to gunpowder, according to Apollo 16 astronaut Charlie Duke. Interestingly, Moon dust and gunpowder aren’t similar at all in composition. The Moon dust itself is made up of primarily silicon dioxide glass that has been shattered into tiny pieces. There is also quite a bit of iron, calcium, and magnesium. There are two main theories as to why the Moon dust smells like this. First, perhaps we are seeing the “desert rain” effect.  This is where the completely moisture free dust comes in contact with the moist air in the lunar module, releasing odors from the dust that have lain dormant for untold years. The second theory is that there is some sort of oxidation taking place. Oxidation is very similar to burning, but without the smoke as it happens too slowly, in this case perhaps initially giving off that burnt-gunpowder smell. By the time the exposed dust is back on Earth, it smells like nothing.

993) The United States once planned on nuking the Moon. The project was labeled “A Study of Lunar Research Flights” or “Project A119” and was developed by the U.S. Air Force in the late 1950s.  It was felt that this would be a relatively easy thing to do and would also boost public perception of how the U.S. was doing in comparison to the Soviet Union in terms of the space race.  A young Carl Sagan was one of the scientists who worked on this project, hired to study how exactly the resulting cloud would expand on the Moon so that they could be sure it would be clearly visible from Earth.  Sagan felt the project had scientific merit in that the cloud could be closely examined by scientists. The project was eventually scrapped as it was determined that the public would not respond favorably to the U.S. dropping a nuclear bomb on the Moon.

995) When in a weightless environment, human’s naturally poop more. Because of this, in the days of the Apollo missions, NASA fed astronauts an ultra-low fiber diet prior to missions to minimize the amount of pooping they would do in space.

996) The energy required to stop the Earth orbiting the Sun is about 2.6478 × 1033 joules or 7.3551 × 1029 watt hours or 6.3285*1017 megatons of TNT. For reference, the largest nuclear explosion ever detonated (the Tsar Bomba by the Soviet Union) produced 50 megatons of TNT worth of energy. This is over 3,000 times more powerful than the bomb dropped on Hiroshima. Disregarding any obliteration scenarios, it would take about 12,657,000,000,000,000 of those Tsar Bomba nukes detonated at the correct location to stop the Earth in its tracks from orbiting the Sun.