Who Invented the Cubicle? 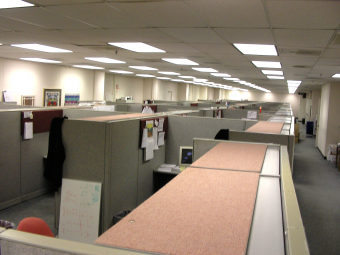 Audiences cheered when the hero of the 1999 movie Office Space unscrewed the walls of his cubicle and watched them come crashing down. Yet 30 years earlier, when the very first cubicle walls went up, employers and workers alike cheered them as the “workplace of the future.”

“Today’s office is a wasteland. It saps vitality, blocks talent, frustrates accomplishment. It is the daily scene of unfulfilled intentions and failed effort.”

That may read like a critique of the modern corporate office, but it was written by an inventor named Bob Propst in 1960. Propst went to work in post-World War II America, just after the majority of the U.S. workforce had shifted from factory jobs to office jobs—“pencil pushers,” as they were called. Their typical workplaces were giant rooms full of rows of desks laid out in a grid, all facing the same direction. The average pencil pusher’s view: the back of a fellow worker’s head. No one had any privacy, but that didn’t matter too much, because workers were discouraged from talking to each other. They had few places to store work papers and personal items, other than an inbox on top of their desk and maybe a drawer or two below. “Here were large numbers of intelligent people working on complex tasks,” said Propst about an aviation company he’d worked at in the 1950s, “acres of them hunched over their desks, trying to create.”

As a sculptor, designer, and former college art professor, Propst specialized not so much in inventing new things but in revamping entire systems (he’d previously designed new quality controls for manufacturing concrete and a more ergonomic cockpit for supersonic jet pilots). Setting his sights on creating a better workplace, in 1958 Propst signed on as head of research and development at the Michigan-based office furniture company Herman Miller Inc.

How could Propst and his design team give office workers more privacy and autonomy, yet still maintain the open environment that he felt would facilitate interaction and communication? First, Propst had to find out what made workers tick, so he interviewed hundreds of them and their bosses, as well as doctors, psychologists, anthropologists, architects, and mathematicians.

Propst also studied a new kind of workplace gaining popularity in Germany called Bürolandschaft, or “office landscape.” Based on socialist principles that encouraged working together as a group, this system eliminated the grid and—depending on the workers’ duties—turned some desks to face each other, placed others side by side, and put still others in a circle. In addition, the file cabinets and bookshelves, usually set along the office’s perimeter, were pulled away from the walls and put in the middle of the room, creating makeshift privacy dividers. Potted plants were strategically placed throughout the room to complete the “landscape” motif. Propst borrowed elements of Bürolandschaft and improved on it to create what Herman Miller called the “Action Office.”

The first design, released in 1964, was a single, freestanding piece of furniture that included bins and a few shelves on each side. The biggest selling point: Employers could place these units anywhere they saw fit. Sales were slow at first, but Propst and his team kept working on the full version—which would feature the floor units attached to partition walls that could be joined to each other in different configurations. In 1968 Herman Miller released the complete Action Office, touted as “the world’s first open-plan office system of reconfigurable components.” 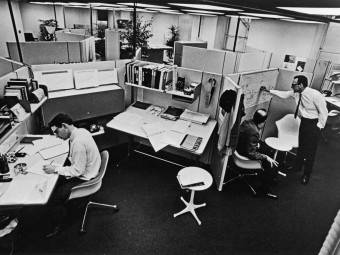 In 1968 Intel, a new technology company in Santa Clara, California—located in the heart of what would later be called Silicon Valley—became one of the first to incorporate Propst’s system. Hundreds more companies (both startups and established ones) placed orders for Action Offices, and Herman Miller raked in over $25 million in corporate sales in the first two years alone. As the 1970s ensued, workplaces across the United States steadily switched from rows of desks to partitioned walls. By the end of the decade, the average workspace area was 12 feet by 12 feet.

Then, in the 1980s, the Digital Revolution took hold. The Action Office system (and the dozens of copycats that followed) could easily fit a computer, monitor, and printer. Sure, those early computers were much larger than today’s sleek PCs and Macs, but the Action Office was spacious enough to handle them. At least that’s how it was supposed to work. But as office rents skyrocketed in the 1990s (nowhere more than in Silicon Valley), employers were forced to accommodate more workers in smaller areas. Ironically, the feature that made it so easy to give these workers more space—adjustable walls—also gave bosses an easy way to cram more and more cubicles together. Result: The wide angles of the Action Office closed up and became squares, and the area of the average workspace was reduced to 8 feet by 8 feet. (It’s even smaller today.) The grid of desks had returned, only now they had fabric-covered walls between them.

Only 20 years after partitioned offices ushered in a new era of comfort and productivity, cubicles (as they were being called) came to symbolize everything that was wrong with the American workplace. The nation’s 40 million or so cubicle workers spent their days in “cube farms” with seemingly no escape from their neighbors’ chit-chatting, keyboard-tapping, radio-blaring, Dorito-crunching, perfume-wafting, gas-passing… 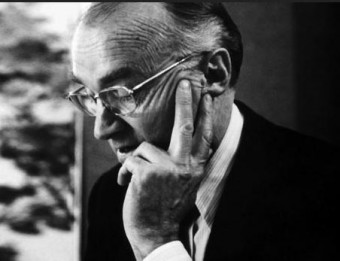 Just as Alfred Nobel came to regret inventing dynamite, and Robert Oppenheimer lamented the atomic bomb, Bob Propst was demoralized by what his grand idea turned into. He didn’t blame himself, though: “The dark side of this is that not all organizations are intelligent and progressive. Lots are run by crass people who take the same kind of equipment and create hellholes. They make little bitty cubicles and stuff people in them. Barren, rat-hole places.” The research backed him up, too: The International Workplace Studies Program concluded that “cubicles can inhibit teamwork by separating workers via artificial walls.”

By the time Propst passed away in 2000, he’d obtained 120 patents, including ones for a vertical timber harvester, an electronic tagging system for livestock, a mobile office for quadriplegics, and a new workflow chart system for hospitals. But today, he’s mostly remembered as the “father of the cubicle”—even though his original design consisted of no cubes at all.