That One Time Snakes, Monkeys, Crocodiles, Rats, and a Gorilla Took Over a Ship 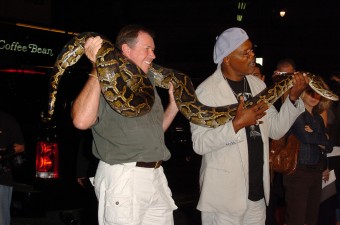 Snakes on a Plane was a ridiculous work of fantasy with no basis in reality…. But as it turns out, a scenario almost exactly like that once happened over a hundred years ago on a boat.

While some of the details of the event have been lost to history, what we know for sure is that sometime in the closing months of 1889, a ship called the Margaret set sail from the city of Durban in current day South Africa helmed by one Captain Sargent. The Margaret was headed for Boston with a rather curious cargo that included at least 100 cockatoos, a dozen or so snakes, two crocodiles, an orangutan, a gorilla and an unconfirmed numbers of monkeys and parrots.

According to a copy of the Sydney Morning Herald from April 9, 1890, the animals were destined for a museum (though it doesn’t mention what for or which one).

Shortly after setting sail a horde of rats caused chaos by eating through the meager grain stores that had been set aside for the cockatoos and parrots, resulting the deaths of all but a few of the birds by the end of the journey.

The crew’s efforts to save the birds were put on hold when a freak gale knocked over some boxes, freeing all of the snakes. At the same time, the crocodiles also managed to escape and entered into a three way battle royale with the snakes and rats, effectively making it so the crew didn’t have safe access to a large portion of the ship for a reported five days.

In a bizarre stroke of good fortune, after all of the snakes and rats were dead, the lone surviving crocodile was killed when a second storm hit and knocked over a box of cargo, crushing the crocodile and once again making the hold accessible.

But this wasn’t the end of it. You see, all of the monkeys had escaped and had taken refuge on the only place they felt somewhat safe, the ship’s rigging.

Despite the best efforts of the exhausted crew, they only managed to recapture four of the monkeys before a combination of storms, high winds and giant waves swept the remainder out to sea, never to be seen again.

Now at this point, you’re probably thinking, surely it’s all over, right? To which we respond, you forgot about the gorilla.

Yes, along with having a dozen snakes, two crocodiles and a slew of monkeys to deal with on a relatively small ship, the crew also had to figure out how to convince an angry gorilla to climb back into the box it had forced its way out of. As if that wasn’t bad enough, the gorilla also somehow managed to get hold of a sturdy iron bar, which the Wiltshire Gazette reported, “With this formidable truncheon [the gorilla] threatened to brain every sailor who came within range.”

The only positive thing going for the crew was that the gorilla was still chained to the floor, though the chain did give it relatively liberal range. It reportedly put up an impressive amount of resistance, injuring almost every member of the crew as they vainly tried to get it back in its container. The worst injury was suffered by the crew’s cook who was apparently “partially scalped” by a crushing blow to the temple he failed to duck. The gorilla then grabbed the cook, whose life was only saved via another crew member taking the opportunity of the gorilla being occupied to sneak up behind it and wack it over the head with the blunt end of a hatchet. The stunned gorilla was then forced back into its box.

You might be wondering at this point what happened to the orangutan that was stored on board.  Well, none of the news reports or other accounts mention that it survived the trip, so presumably it either died in the same way the monkeys did or perhaps was eaten by a crocodile.

In January of 1890, the Margaret limped into port in Boston, reportedly a great surprise to the museum staff who’d simply assumed that the boat had been destroyed by a storm, since it was so late to arrive. In the end, the staff who’d been waiting for their large shipment of animal cargo to arrive found only four cockatoos, a few monkeys, and a single gorilla left alive.

When the bemused authorities asked Captain Sargant what had happened, he simply responded that between the storms and the animals it was an experience he’d rather not repeat and promptly refused to talk about it. Thankfully for those of us who like a bit of odd, obscure history, his crew were significantly less tightlipped and told the story to anyone who’d listen, leaving us of the 21st century with the humorous 19th century newspaper accounts of the event.