This Day in History: October 23rd- The London Tornado 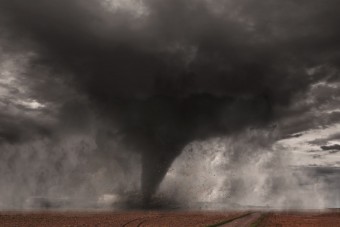 Tornadoes aren’t the first thing to leap to mind when picturing Merry Olde England, but a whopper of a twister tore through London on October 23, 1091. It is thought to be the largest known tornado in the UK, as well as the earliest – at least that we know about.

From contemporary accounts of the damage meteorologists conclude that the tornado was most like a T8 (severely devastating) on the tornado scale, which runs from T0 to T10. A tornado of this magnitude would have had wind speeds as high as 240 mph.

Back in 1091, during the reign of William Rufus, there was obviously drastically less infrastructure than today for a tornado to wreak havoc on. But its 200+ mph winds did cause the London Bridge to, indeed, fall down, and the nearby church of St. Mary-le-Bow was also leveled. Accounts from the time report that four 26-foot long rafters were driven so deeply into the earth by the force of the tornado that only four feet remained visible above-ground.

Several hundred wooden dwellings in the city were also destroyed by the twister, along with numerous other lesser known churches. Probably the most amazing outcome of the 1091 London tornado was that only two people are believed to have died in its fury.