This Day in History: October 22nd- The Robin Hood of the Cookson Hills 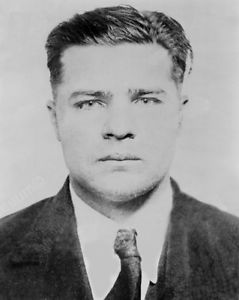 One of America’s most colorful folk bandits was Charles Arthur Floyd, also known as “Choc” Floyd or “Pretty Boy.” Hailing from Oklahoma, he became one of the country’s most notorious criminals, immortalized by Woody Guthrie and in John Steinbeck’s novel Grapes of Wrath.

More of a Robin Hood figure to most than a hardened criminal, despite the murders he committed, Floyd was a hero to the downtrodden masses during the Great Depression. This was due to his habit of destroying mortgage notes while he was committing bank robberies, saving many a struggling family from foreclosure. Floyd would also use some of his stolen booty to buy the hungry hill folk groceries.

But to J.Edgar Hoover and his FBI, he was Public Enemy Number One.

Floyd was certainly atypical. He never belonged to a gang. Instead, he would turn to several tried-and-true accomplices when needed. He was seemingly always impeccably dressed and extremely courteous during the commission of his crimes, so long as you didn’t pull a gun on him.

Born in 1904, young Charlie was raised on tenant farms, working corn and cotton fields with his family. He escaped the drudgery of farm-life by daydreaming about the adventures of Jesse James and the other outlaws active at the time.

He’d married by 1921 and money was scarce. So were jobs. He committed his first robbery at 18, stealing $3.50 (about $46 today) from the post office. And that’s when his life of crime began in earnest.

Floyd operated in the East Liverpool, Ohio area along the river as a hired gun for the bootleggers during the 1920s, occasionally being arrested and seeing some time in prison. Then he went west to Kansas City where he picked up his nickname “Pretty Boy,” with varying accounts as to how he got it. For instance, in one, it was bestowed up on him by the local madam. In another, he got the name when a robbery victim described him as a “pretty boy with apple cheeks” after the fact. Whatever the case, he detested the nickname and preferred the “Robin Hood of the Cookson Hills,” as the local newspapers sometimes called him.

During his career, Floyd pulled off at least thirty bank robberies in the Midwest. Law enforcement believed he was also guilty of quite a few murders resulting from shoot-outs with police or other criminals.

During the summer of 1933, Floyd and Adam Richetti became the prime suspects in the Kansas City Massacre, which resulted in the deaths of four law enforcement officials. This bloodbath gave Hoover and the FBI the empowerment they needed to pursue Floyd using any means necessary. And pursue they did, putting a $23,000 (about $415,000 today) bounty on his head, dead or alive- a very attractive bounty for many during the Great Depression. However, while Floyd was perfectly happy to admit to many other crimes he committed, he vehemently denied he had any involvement in the Kansas City Massacre.

Whatever the case, on October 22, 1934, the FBI got their man, gunning him down in a cornfield near East Liverpool, Ohio. It was reported that to his last breath he still denied involvement in the KC Massacre. It later turned out the evidence indicated that he may well have been telling the truth, though it isn’t known for sure.

Charles Arthur Floyd’s body was returned home to the Oklahoma hills. He was buried at Akins Cemetery where he’d told his mother just a year earlier, “Right here is where you can put me. I expect to go down soon with lead in me. Maybe the sooner the better. Bury me deep.” Reportedly 10,000-20,000 people attended his funeral on October 28, 1934.

But many a starvin’ farmer
The same old story told
How the outlaw paid their mortgage
And saved their little homes…
Yes, as through this world I’ve wandered
I’ve seen lots of funny men;
Some will rob you with a six-gun,
And some with a fountain pen.
– Woody Guthrie