This Day in History: October 14th- The Last Course 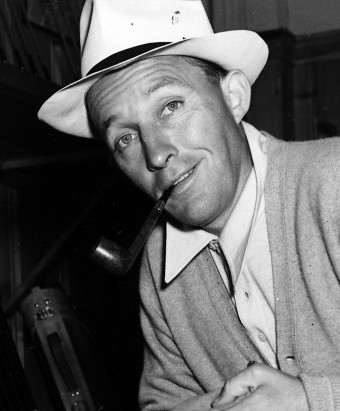 On the early evening of October 14, 1977, legendary entertainer Bing Crosby died of a massive heart attack after doing what he loved best – playing 18 holes of golf. Bing was in Madrid, Spain playing on the La Moraleja Golf course at the time of his death. He defeated two Spanish golf pros that day and remarked on the way back to the clubhouse, “that was a great game of golf, fellas.”

Bing suggested to his companion, resort manager Valentin Barrios, that they have a Coca-Cola, then he suddenly fell face-down on the brick path, making no attempt to soften his landing. When Barrios and several others who came running to help turned him over, he was extremely pale and had a huge red bruise on his forehead. Every effort was made to revive him at the scene and later at a local hospital, but to no avail.

Harry Lillis “Bing” Crosby, born on May 2, 1903, was one of the most well-loved and influential recording artists of all time. His deep, resonant voice coupled with his warm and relaxed vocal style assured his consistent popularity throughout five decades.

He cut his teeth performing jazz (his idol was Louis Armstrong), releasing a record with his group the Rhythm Boys, Three Little Words, with Duke Ellington in 1930.

Bing eventually went solo and began headlining in theaters and swanky nightclubs. The Hollywood elite always caught his act when he played the Coconut Grove. Mack Sennett was in the audience one night and offered the young crooner a contract to make a series of comedy shorts. CBS gave him a daily radio program. Also, Paramount Studios offered him the lead role in The Big Broadcast, which introduced his theme song “Where the Blue of the Night Meets The Gold Of The Day.”

People couldn’t get enough of Bing.

One the biggest stars in the country by the 1940s, Bing became even more in demand when World War II broke out. Aside from his hugely successful “Road” movies with Bob Hope, starting off with The Road to Singapore, he sold a record number of war bonds and took the time to personally answer thousands of letters from U.S. servicemen.

He also recorded the best selling single of all time, Irving Berlin’s White Christmas, in the spring of 1942, a cherished holiday tradition for generations to come. In 1944, Crosby won an Oscar for his portrayal of the hip, young priest Father O’Malley in Going My Way – the first time a popular singer won an Academy Award. (A slight modification of the title of that film was later used ironically by his eldest son, Gary, in a scathing memoir about his father who he claimed would regularly beat him until he bled, with the accuracy of that memoir disputed by another of Bing’s sons, Philip, who stated “Gary was a vicious, no-good liar.”) Whatever the case, Bing was nominated for an Oscar two more times, for The Bells of Saint Mary’s in 1945, and again for The Country Girl in 1954.

Bing pioneered the pre-recorded radio program, a huge improvement for both the quality of the program and convenience for the performers. Obviously it meant Crosby could tape his show at times more in tune with his schedule, but he could also edit mistakes or things he didn’t like about the program and have more control over the equipment and how it was used.

Golf and horse-racing were two life-long passions of Bing’s. His love for golfing was legendary, and he managed to combine his enthusiasm for the sport with a way to raise money for charity. He founded the Crosby Golf Tournament (the first celebrity pro-am tournament) in 1937. He also founded the Del Mar racetrack, but his luck was better with golf than horses, as evidenced by this Tommy Dorsey lyric: “when Crosby’s horses win a race, will you still be mine?”

Cosby kept up a steady pace of movies and recordings into the 1960s. But then he slowed down a bit, saving most of his energy for television. His yearly Christmas TV specials became a holiday favorite, and he spent more time playing golf and at the race-track.

After 1,600 recordings and over 50 years in show business, Bing had earned the chance to indulge himself in his favorite pastimes. Of course no-one but Crosby could have said for sure what way he’d have preferred to exit this world, but one imagines a quick heart attack on the golf course (and likely never knowing what hit him) after beating two pros probably would have suited Bing just fine.