This Day in History: September 11- Beatrice Cenci and an Act of Desperation 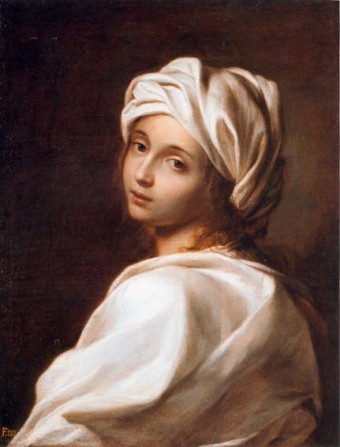 “There is a fixed and pale composure upon the features; she seems sad and stricken down in spirit, yet the despair thus expressed is lightened by the patience of gentleness … The lips have that permanent meaning of imagination and sensibility which her suffering has not repressed … Her eyes, which we are told were remarkable for their vivacity, are swollen with weeping and lustreless, but beautifully tender and serene. In the whole mien there is a simplicity and dignity which, united with her exquisite loveliness and deep sorrow, are inexpressibly pathetic.” – Shelley on Guido Reni’s portrait of Beatrice Cenci

By all accounts, Francesco Cenci was a brute and a horrible excuse for a human being. He violently abused his first wife Ersilia Santa Croce and grossly mistreated his sons and daughter Beatrice. Because of his wealth and influence, he felt free to use everyone as targets of his violent rage or lust.

Eventually Francesco’s outrageous behavior (though not his horrible treatments of his family) got him in hot water, and the Pope fined and imprisoned him for a few months. Keep in mind if the average Joe had committed the same offenses it would have been curtains for him, but Francesco, of course, was a nobleman.

During his imprisonment, Beatrice took the opportunity to seek help from her father’s abuse and cruelty but the authorities chose to turn a blind eye. Francesco heard that his daughter was squealing on him, and as soon as he was released he forced his second wife Lucrezia, Beatrice, and his youngest son Bernardo off to his remote castle La Rocca, on a high craig above the small village of La Petrella del Salto.

Away from the city, Francesco became even more insanely cruel. When her father discovered Beatrice had contacted her older brother Giacomo to intervene, he whipped Beatrice to within an inch of her life. It became clear that the only way to end Francesco Cenci’s tyranny was to end his life.

It’s hard to know exactly who was in on the plot to off Papa Cenci. Most accounts believe Lucrezia, Beatrice, Giacoma and two family servants (one rumored to be the secret lover of Beatrice) were the co-conspirators. The servants were the ones who committed the actual crime – which didn’t quite go off as planned.

Lucrezia had drugged her husband as agreed, but when the assassins showed up on September 9, 1598, expecting an unconscious victim, they found instead the ever-cranky Francesco ready to fight. This meant they had to bash his head in and ended up hammering a metal spike into his skull. It couldn’t have happened to a nicer guy, but it really wasn’t something you could make look like an accidental fall from a window, which was the original plan.

And, not surprisingly, no-one believed for a second it was anything but what is was – premeditated murder. The entire Cenci clan was taken back to Rome to stand trial.

The trial dragged on for a year, and before it was over the two hands-on murderers were both dead. One died while being tortured, and one escaped, but was captured by a bounty hunter and beheaded. The Cencis were also tortured despite their aristocratic status. They confessed – except for Beatrice, who remained completely silent.

They were all found guilty and sentenced to death.

Everyone in Rome knew what a despicable monster Count Francesco had been and sympathized with the nightmarish plight of the Cenci family. There were loud calls for clemency, but Pope Clement felt he had to make an example of the Cencis to stem the rising tide of murders among noble families during that era. So, beheadings all around.

The sentences were carried out at dawn outside the Castel St Angelo on September 11, 1599. Beatrice reportedly went to her death with remarkable composure. She and her step-mother Lucrezia were executed either by sword or a primitive form of the guillotine. Her brother Giacoma, being a man and the one who ratted them all out, had his head smashed in with a mallet before he was quartered. Little brother Bernardo, age 12, had his life spared but was forced to watch his family die, and was then sentenced to life as a galley slave.

Beatrice’s body, along with the rest of the Cencis is buried in the beautiful church of San Pietro in Montorio in Rome, on the site where St. Peter was martyred. The legend goes that her ghost revisits the site of her execution every year on the anniversary, head tucked under her arm.