“The Queen of Thieves”- The Story of Criminal Mastermind, Ma’ Mandelbaum 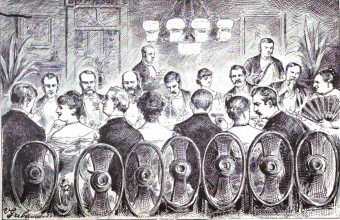 Over a 20-year career in post-Civil War New York, Fredericka “Marm” Mandelbaum is estimated to have fenced as much as $10 million in stolen property (around a quarter of a billion dollars when adjusted for inflation). Sitting at the center of a vast crime web the spanned large areas of the United States, Ma Mandelbaum was then known as “the greatest crime promoter of all time” and “the Queen of Thieves,” before getting caught red-handed. Despite this, Marm never spent a day in prison and lived out her days in luxury.

Emigrating to the United States in about 1850 from Prussia, at the age of 23, Marm and husband Wolf Israel Mandelbaum settled in Kleindeutchland in the Lower East Side. Struggling for several years as peddlers, Marm got to know the children who roamed the streets, pick-pocketing and looting local vendors. Gaining their trust, she soon became what was much later described as “a female Fagin to a team of Artful Dodgers, buying their wares and reselling them for a profit.”

Typically never paying more than 20% of a good’s wholesale value, and with a keen eye for estimating, Marm soon had a healthy savings. Together with Wolf, said to have been a non-entity in the whole thing, they opened a dry goods store in 1865 at Clinton and Rivington, although its primary activity was the fencing business they ran out of the back.

Reportedly an ugly woman, with Police Commissioner George Walling describing her as “greasy, fat, and opulent” and a Pinkerton National Detective Agency representative stating she was a “a gargantuan caricature of Queen Victoria with her black hair in a roll and a small bun hat with dropping feathers,” what she lacked in physical appeal, she certainly made up for in shrewd intelligence. Described as sharp as a tack and an expert in business, she was also fluent in English and German. As such, Marm became a favorite among German-speaking adult thieves, as well as the younger, criminal set.

Not content to wait for stolen goods to come to her, Marm planned, arranged, and bankrolled numerous crimes, as well as provided the means to unload the ill-gotten gains through her vast network of thieves, pickpockets, scam artists, cab drivers, jewelry smiths, police officers, and defense attorneys. Understanding the law, Marm reportedly made sure she never spoke with more than one crook at a time when negotiating a deal- if no one could corroborate what was said or took place in a specific meeting, it was simply her word against theirs, if no physical evidence could be recovered.

After Wolf died in 1875, Marm’s criminal enterprise, as well as her political influence, continued to grow. She hobnobbed with New York’s high society, was friendly with the Thirteenth Ward’s police and cultivated relationships with the judges of the Fifth District Court. She was even a favorite of the famously corrupt Tammany Hall.

As the New York Herald noted of her relationship with the police,

When a man who has lost a $50 watch went to the police station and offered “$25 and no questions asked” for its recovery what could be more profitable for the time consumed than for a detective to go to “Mother Braum” and buy for $15 an identical ticker for which the shrewd woman had paid no more than $10?

To now have to run about among a lot of minor fences in search of stolen property that once could be confidently looked for at the Mandelbaum place will be very annoying to detectives whose habits have become fixed. It is no wonder that mother Baum had never before been troubled by detectives. Shall a man quarrel with his own bread and butter, particularly when the person who provides it gives him occasionally a new dress for his wife and diamond studs to illuminate his own official front?

Realizing that her network was her greatest asset, Marm is even thought to have opened a sort of school for criminals, Grand Street School, teaching the young how to pickpocket and thieve, as well as more seasoned professionals how to burgle, crack safes, blackmail and run various fraudulent schemes. Among her web of shady friends, Marm counted the “Napoleon of Crime,” international art thief, Adam Worth, and one of the most famous grifters in history, Sophie Lyons. Other unscrupulous associates included Queen Liz, Big Mary, Kid Glove Rose, Black Lena Kleinschmidt and Old Mother Hubbard.

Paranoid and prepared, Marm insisted that sellers remain present and in her sight throughout any transaction, and money only ever exchanged hands after she had the stolen goods safely in her possession. When she went out, one of her children acted as a lookout, and she was usually accompanied by the large Mr. Herman Stoude, her most trusted confidant, who handled her heavy work. At home, among other hidey holes, she had a chimney with a false back hooked up to a dumbwaiter for hiding loot.

Through it all, her own hands remained seemingly clean, despite the efforts of the incorruptible members of the police to catch her at something. As Police Commissioner George Walling stated,

As a handler of stolen goods Marm Mandelbaum has no peer in the United States… We even hired rooms on the opposite side of the street from her store for the purpose of obtaining such evidence as would lead to her arrest and conviction as a receiver of stolen goods. Mrs Mandelbaum is a very sharp woman, however, and is not often caught napping. Whenever she buys goods off thieves she appoints a place of meeting where she can confer without suspicion. She will not allow them to come to her store under any consideration.

To handle criminal charges, Marm kept the law firm of Howe & Hummell on retainer (with an annual retainer of $5,000, approximately $100,000 today) and maintained a defense fund for her associates who were otherwise unable to pay their own legal fees. Of course, putting up these funds for their defense not only helped keep some of her best thieves out of prison, making sure they were out making her money, but also earned their gratitude and a tidy profit in that they were required to pay the funds back at a premium, giving her an extra measure of control over their future actions.

Finally fed up with the failures of the local police to catch this well-known criminal at anything illegal, in 1884 the New York District Attorney, Peter Olson, hired the famous Pinkerton Detective Agency to pierce Marm’s criminal veil.

Using the alias Stein, Pinkerton’s Gustave Frank was able to trick Marm into fencing stolen silk that had been marked. After she received it, but before she could pass it on, Marm’s property was raided, and she, Stoude and her son, Julius, were arrested. During the raid, it was noted that in her personal stash, “There seemed to be enough clothes to supply an army. There were trunks filled with precious gems and silverware. Antique furniture was stacked against a wall.” And that, “It did not seem possible that so much wealth could be assembled in one spot.”

After being arrested, Marm issued an official statement,

I keep a dry goods store, and have for twenty years past. I buy and sell dry goods as other dry goods people do. I have never knowingly bought stolen goods. Neither did my son Julius. I have never stolen anything in my life. I feel that these charges are brought against me for spite. I have never bribed the police, nor had their protection… I and my son are innocent of these charges, so help me God!

Though the authorities were initially hesitant to let her go, through significant effort by her attorneys, Marm was ultimately released on a bail of a whopping $100,000 (about $2.7 million today). She was, however, followed at all times, with detectives setting up shop across the street from her home and tailing her if she left.

The New York Herald reported the scene at the day of her trial,

Rows and rows of stiff backed, rusty seats were crowded with people who had come to see Mother Mandelbaum, the protectress of thieves, brought to the bar of justice. There were bankers and bank burglars elbowing each other in the eager chattering throng. Bewhiskered policemen and dusty old-court loungers were jammed together. Lawyers, actors, pickpockets, clergymen, merchants and clerks by the score strained and jostled and whispered in the most democratic fashion.

And in the midst of it all sat lawyer Howe with his legs crossed and a look of peace in his eyes.

There were only three empty chairs in the courtroom and when one man tried to take one he was smartly told it was for one of the defendants. Detective Frank and Pinkerton lolled sleepily in their chairs. The District Attorney and his assistants were brimming with enthusiasm.

But yet the lawyer with sparkling diamonds looked happy. Nor could all the detectives and District Attorney’s disturb the beautiful serenity of his rosy countenance.

The Herald then reported what happened next when the court was called to order,

Lawyer Howe arose and looked around the court carefully. His eyebrows went higher and higher up his peaceful brow as his gaze wandered back to the troubled visage of District Attorney. Then a very red hand, that glimmered and shone with jeweled gold, was swung on high. “I am forced to confess that the defendants are not here,” he said. “No, they are not.”

Marm and her co-defendants had managed to slip the noose. How? Rumor had it that she paid off her neighbor, who had rented the house to the detectives, to keep her informed of the detectives’ comings and goings. At an opportune moment, she supposedly used a decoy of herself in the form of one of her servants to impersonate her. Once the detective on duty was off following the decoy, she vacated her home, reportedly managing to smuggle about $1,000,000 (about $27 million today) along with her.

Whether this is really how she managed her escape, she did elude the detectives who were supposed to be tracking her every move and subsequently turned up in Ontario, Canada, where she purchased a large home and set up shop selling women’s clothing and certain fine items, living an apparently crime-free life from that point on.

Of course, she was tried twice while in Canada for smuggling lace and jewellery (many items in her store were reportedly imported from New York at a bargain), but in both instances managed to be acquitted.  Unsuccessful efforts were also made to lure her back across the border by undercover police officers looking to purchase such things as diamonds from her. (The authorities knew well where she was; she never hid her whereabouts. But there was little they could do to get her back to the U.S. where she could be arrested, despite their sincerest efforts.)

Marm frequently lamented having to remain in Canada, even to the media, and implored her legal team at Howe & Hummell to try and find a way to allow her to come back to the U.S. without risk of her being sent to prison. Marm also reportedly confided to a friend that she “would gladly forfeit every penny of my wealth in order to once again breathe freely the atmosphere of the 13th Ward.”

However, there were occasional rumors of Marm being sighted in New York, particularly when her daughter, Anna, fell seriously ill and died.

It’s not surprising from all this that when she died in February of 1894, some at the time thought she must have faked her own death to allow her to return to the U.S. under a new identity, with no one now looking for the deceased Marm Mandelbaum.