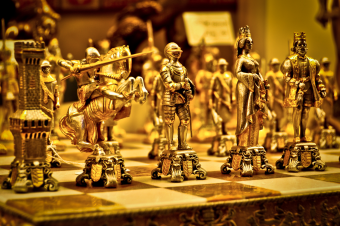 In 1744 at the age of 18, François-André Danican Philidor (1726-1795) enthralled Parisian society after playing two simultaneous games of chess in a public demonstration, all while blindfolded. And even though he lost one game and only drew the other, the display established Philidor as a chess master par excellence, and blew new life into the ancient practice of blindfold chess.

Calling Philidor’s 1744 exhibition “one of the most extraordinary examples of the power of memory and imagination,” his contemporary, Jean d’Alembert, the Chevalier de Jaucourt, revealed just how much of the history of blindfold chess had been forgotten.

In the 8th century in the Middle East, Sa’id bin Jubair (665-714 AD) became the first player in recorded history to turn his back on the board while playing, and his contemporary, Muhammad bin Sirin, also enjoyed the challenge of playing without looking. As chess was considered mukarrah (disapproved of) under Muslim law at that time, one observer described practioners of blindfold chess as being “in league with the devil.”

In the 13th century in Florence, Buzecca (also sometimes called Borzaga or Buchecha) played three of the city-state’s best chess players, simultaneously, although he was blindfolded for only two of the games (he won two of them and drew the third). While this probably wasn’t really the first time this happened, it is the first documented instance of a single player holding concurrent, blindfolded matches.

Blindfold chess was apparently widespread in the Arabic world, and there were reports in the 14th century of a blind player, “Ala’addin,” who dominated the game among the nobility in Egypt. Another blindfolded player, named an-Nizam al-‘Ajami was reported to also play multiple, blindfolded, simultaneous games, albeit in Damascus. By the 16th century, reports indicated that there were many Arabian players who could manage an astounding five blindfolded, concurrent matches, though specific documented instances of this are difficult to come by.

However, none of this significantly lessens Philidor’s achievement (you try playing one game blindfolded), and certainly his contemporaries were impressed, and many who didn’t witness it themselves disbelieving. Luminaries like Benjamin Franklin, Jean-Jacques Rousseau and Voltaire wanted to play him, and by 1747, he had moved to London where he played chess professionally, beating England’s top players.

At his peak, he is generally considered to have been the greatest chess player in the world and that peak lasted quite some time. As modern day chess Grandmaster Andrew Soltis noted of Philidor, “[he] was the best player in the world for 50 years. In fact, he was probably about 200 rating points better than anyone else yet alive—set apart by the mysteries of the game he had solved.”

In 1748, he wrote the L’analyse du je des Eschecs (Analysis of the Game of Chess) (published in 1749) in which he penned the famous line, “les pions sont l’ame due jue” (“the pawns are the soul of chess.”)

This motto was in direct contrast to popular strategies of the day. As chess Grandmaster Boris Alterman noted,

500 years ago chess was different from today. Pawns didn’t cost as much as they do today. The best players started games with the gambits. Pawns were only a small price to: Open a file or diagonal; Create an immediate attack on an opponent’s king. It was the Italian style of chess. All positions of the King’s Gambit were very popular…

In addition to giving us the classic line, Philidor’s Analysis is widely hailed as the first book on chess to provide detailed notes on playing the middle game, to present chess strategy as a whole, and for the ideas of prophylaxis, sacrifice, blockade and the “mobility of the pawn formation.” 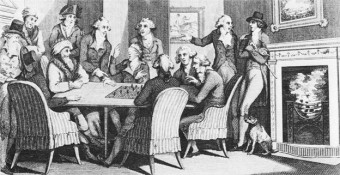 Philidor continued to play blindfolded chess games, including beating three players in simultaneous games in Berlin in 1750, and drawing one and losing one during concurrent matches at Parsloe’s Chess Club in London on May 27, 1782. The following year, on May 9, Philidor won two and drew one of three simultaneous blindfold games, also played in London. (During this particular one, affidavits were signed by the opposing players, as it was thought by those players that nobody would later believe this had really happened.)

His last known blindfolded match, on June 20, 1795, was also played at Parsloe’s where two were held with the blindfold, and the third with sight; it’s not clear today how those matches played out. Philidor died on August 31, 1795.