This Day in History: August 6th- Having a Ball 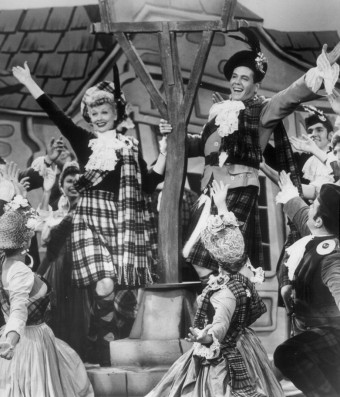 Lucille Ball, one of the greatest comedic forces in entertainment history and the embodiment of a classic rags-to-riches tale, was born on August 6, 1911, in Jamestown, New York. Her father died of typhoid when she was three, so her mother DeDe found factory work and a new husband, but this didn’t improve their economic situation much.

Lucy was interested in the theater and often took part in school plays. In 1926, her mother enrolled her in the John Murray Anderson/Robert Milton School of Theater and Dance in New York, but compared to star pupil Bette Davis, she was a dismal failure. The school’s proprietor wrote to DeDe advising her that she was wasting her money. Lucy returned to Jamestown and life as an ordinary high school student.

But not for long. She returned to New York City, and by 1927 had found steady work as a model. By the 1930s, she decided to try her luck in Hollywood as an actress – and as a blonde. She became Queen of the B-movies during the 1940s, co-starring with comic legends including Laurel and Hardy, Buster Keaton, the Marx Brothers and the three Stooges.

It was during the filming of a minor film called Dance, Girl, Dance in 1940 that Lucy met 23-year-old Cuban band leader Desi Arnaz Jr. Although seemingly mismatched, they were married by year’s end.

During the ‘40’s, Lucy became a redhead and made more movies while Desi was on the road most of the time. Ball seemingly couldn’t achieve the top-tier Hollywood stardom she’d always dreamed of, so Desi encouraged her to give broadcasting a try. Lucy landed a lead role on the radio comedy My Favorite Husband, which made CBS executives want to recreate something similar for the new medium of television.

Ball was insistent that Desi be given the role of her husband in the series. They wanted to work together in a good faith effort to put their marriage first (and to keep Arnaz away from temptation on the road, no doubt.) Studio execs were hesitant about having a Cuban leading man, so the couple took their show on the road to prove them wrong and formed Desilu Productions.

Sure enough, I Love Lucy starring Lucile Ball AND Desi Arnaz premiered on October 15, 1951, and within six months was TV’s number one rated program. It ran for six seasons and garnered over 20 awards, including five Emmy awards (see: Why are the Emmys Called That?). The series spawned one of the most memorable episodes of any series ever when Lucy gave birth to Little Ricky. The show aired on the very day Lucille Ball delivered her real-life son Desi Arnaz, Jr. More viewers tuned in to see Lucy and Ricky have their baby than for President Eisenhower’s inauguration.

When I Love Lucy ended its run in 1957, Desilu continued to produce blockbuster TV hits such as Make Room for Daddy, The Dick Van Dyke Show, Star Trek (See: A Trek Story) and Mission: Impossible.

In 1960, Ball and Arnaz divorced after 20 years of marriage. She married comedian Gary Morton two years later and bought out Arnaz’s shares in Desilu, making her the first female to head a TV production studio.

Lucy starred in a couple more sitcoms, The Lucy Show (1962-68) and Here’s Lucy (1968-73), which were both fairly successful, though not on a par with I Love Lucy. But the honors began pouring in – Lucille Ball was the first woman to win the International Radio and Television Society’s Gold Medal in 1971. She was inducted into the Television Hall of Fame and recognized for her impressive body of work from the Kennedy Center for the Performing Arts.

By the late ‘70s and early ‘80s, Lucy was only making sporadic appearances, usually as a special guest star. Her last outing was to the 1989 Academy Awards. She underwent open-heart surgery in April 1989 but died a week later on April 26, 1989, when her aorta ruptured.

Luckily for the rest of us, the beautiful, madcap, incredibly gifted, redheaded comedienne will live on forever in re-runs.