This Day in History: August 17th- A Bombshell 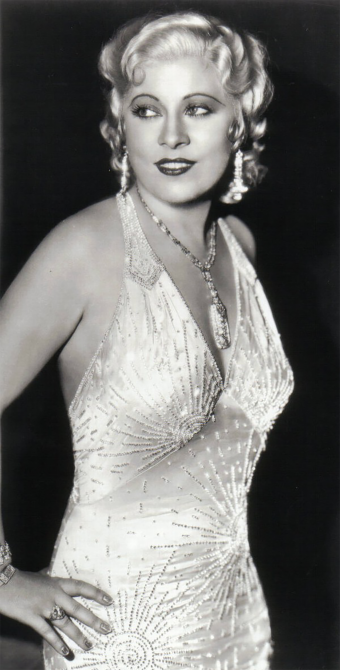 “I believe in censorship. I made a fortune out of it.” – Mae West

The original blonde bombshell, Mae West, was born on August 17, 1893. Mae grew up in Brooklyn, New York. Her father was “Battlin’ Jack” West, a prizefighter and street brawler for hire. Her mother, Tillie, raised Mae and her two younger siblings in a relaxed manner far different from the strict Victorian fashion common at the time. Precocious Mae was performing for her delighted family from the time she was a toddler, and when she was five she made her first appearance on stage at a church social.

By age 14, Mae was performing professionally in Vaudeville. Her act spoofed Victorian prudery and innocence – she outwardly portrayed a sweet, young thing bedecked in ribbons, bows, and a big, flouncy hat, while impersonating adult burlesque performers. Around 1910, she teamed up with fellow vaudevillian Frank Wallace, who she secretly married at 17 (albeit briefly).

Mae’s big break came in the 1918 Shubert Brothers revue Sometime. With each new role, West had greater input fleshing out of each of her characters, including rewriting dialogue. It wasn’t long before Mae was writing her own plays.

In 1926, she wrote, produced, and directed Sex, her first starring role in a Broadway play. It was a box office hit, but the more uptight critics gave it low marks for its explicit sexual content. New York City officials also got their knickers in a twist over the play and raided the theater to arrest West and most of the cast.

Mae was tried on morals charges, found guilty, and sentenced to 10 days in jail. She dined with the warden and his wife a couple of times while she did her not-very-hard-time and got sprung from the pokey early for good behavior. She later stated, this was “…the first time I ever got anything for good behavior.” In the end, all those headlines meant free publicity, which did wonders for her career.

Completely unchastened by her recent experience, West’s next play was called Drag, which dealt with the subject of male homosexuality. It was a smash in Connecticut and New Jersey, but the Society for the Prevention of Vice kept it out of New York. Mae continued to write and direct plays for the next several years. In many cases, the cast had to learn two versions of the script – the real one, and a tamer version if the vice squad could be lurking. This only added more allure to Mae’s productions, and she was packing them in night after night.

Hollywood finally took notice of Mae’s incredible Broadway success in 1932. By then she was 38 years old and well past the age women were playing sexy temptresses – but Mae wasn’t just any woman. Paramount Pictures offered her a contract at $5000 per week (about $80,000 per week today). They also let her re-write her lines in the films, such as in her first film, Night After Night, that set the tone for her persona from her first line where a hat check girl says to her “Goodness, what beautiful diamonds.” To which West replied, “Goodness had nothing to do with it, dearie.”

In 1933, she starred in She Done Him Wrong with newcomer Cary Grant. It was in this film that she delivered her famous “Why don’t you come up sometime and see me?” line that has become part of our shared cultural heritage (and that everybody gets wrong.) The movie made tons of money, saved Paramount Studios from ruin, and was nominated for a Best Picture Oscar. Her second film, I’m No Angel, also co-starring Cary Grant, was another a box office hit. By 1935, Mae West was second only to William Randolph Hearst as the highest-earning American.

But not everyone loved Mae’s good-natured bawdiness as much as the American movie- going public obviously did. The Hays Office, headed by Will H. Hays, was tasked with the responsibility of making sure American films were kept reasonably “pure.” Their organization, with the Motion Picture Production Code behind them, could pre-approve movies and even change objectionable scripts.

They began seriously enforcing the code on Mae’s movies in the summer of 1934 and performed an editing hack job on her films. West countered by adding more double entendres and innuendos to her screenplays, making it extremely difficult for the censors to know what exactly to censor. Mae’s Mission accomplished.

In 1936, she starred in Klondike Annie. William Randolph Hearst was so offended by the subject matter he refused to allow ads for the film to run in any of his many newspapers. This would have been a severe blow to anyone else, but Klondike Annie was the pinnacle of Mae’s career.

West continued making films throughout the 1930s, but her frustration with the prudery and censorship in Hollywood was beginning to wear. In 1939, she wrote a successful vehicle called My Little Chickadee that also starred W.C. Fields, but by the early 1940s, Mae was ready to retire from the movies.

However, even as she approached the age of 60, Mae kept busy. At the beginning of the 1950s, she put together a nightclub act featuring some of her earlier stage work and song and dance numbers. West took her show to Vegas where it was a great success. She also took the time to write her autobiography Goodness Had Nothing To Do with It in 1959.

By the 1970s, Pop Culture had finally caught up with Mae, and a new generation rediscovered her films. She even appeared in two more movies, Myra Breckinridge and Sextette. Of course, what was considered so risqué in the 1930s was seen as campy 40 years later, but Mae’s delightful delivery and double meanings are hilarious in any decade.

Mae suffered a fall in August of 1980, and her health deteriorated quickly after that. She died on November 22, 1980, at the age of 87 and was buried in her hometown of Brooklyn New York.