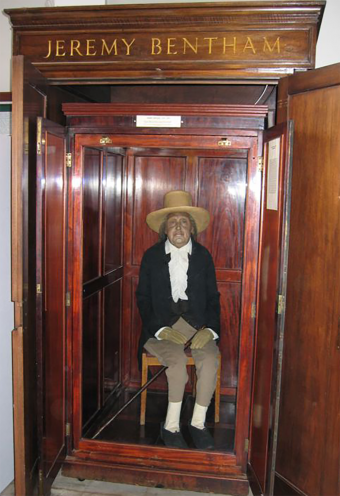 Jeremy Bentham was born on February 15, 1748 in London, England. His father, a lawyer, believed Bentham would follow in his footsteps and enter the law profession. Due to his son’s very apparent intelligence, being something of an intellectual prodigy, he even had wild ambitions for Jeremy to ascend to the position of Lord Chancellor of England.

And, indeed, Young Jeremy showed a propensity for learning at an early age, starting to learn Latin at the age of three and attending the Queen’s College Oxford at twelve. But after listening to leading law practitioners of the time, such as Sir William Blackstone, Bentham became disillusioned with the career path. So instead, he dedicated his life to writing about the inequities in law and proposing numerous social reforms- everything from advocating for a minimum wage, gay rights, universal suffrage, equal rights for women, ending slavery, separation of church and state, freedom of expression, the end of physical punishment (both concerning children and criminals), animal welfare, and ceasing capital punishment. In his spare time, he also was one of the founding fathers of utilitarianism.

While he was a prolific writer from childhood up to the day he died, it is what happened after his death on June 6, 1832 that is the subject of this article.

You see, in his Will, Bentham left very specific, and somewhat peculiar, instructions of what he wanted done with his body:

My body I give to my dear friend Doctor Southwood Smith to be disposed of in a manner hereinafter mentioned, and I direct (that) he will take my body under his charge and take the requisite and appropriate measures for the disposal and preservation of the several parts of my bodily frame in the manner expressed in the paper annexed to this my Will and at the top of which I have written Auto Icon.

The skeleton he will cause to be put together in such a manner as that the whole figure may be seated in a chair usually occupied by me when living, in the attitude in which I am sitting when engaged in thought in the course of time employed in writing. I direct that the body thus prepared shall be transferred to my executor. He will cause the skeleton to be clad in one of the suits of black occasionally worn by me.

The body so clothed, together with the chair and the staff in the my later years borne by me, he will take charge of and for containing the whole apparatus he will cause to be prepared an appropriate box or case and will cause to be engraved in conspicuous characters on a plate to be affixed thereon and also on the labels on the glass cases in which the preparations of the soft parts of my body shall be contained … my name at length with the letters OB followed by the day of my decease.

If it should so happen that my personal friends and other disciples should be disposed to meet together on some day or days of the year for the purpose of commemorating the founder of the greatest happiness system of morals and legislation, my executor will from time to time cause to be conveyed to the room in which they meet the said box or case with the contents therein to be stationed in such part of the room as to the assembled company shall … meet.

Why Bentham chose this specific fate for his remains isn’t known. It is also important to note that during Bentham’s life, dissection was illegal in England with the exception of when the body belonged to an executed criminal. Members of Parliament were discussing the 1832 Anatomy Act, which would allow dissections so long as the body was acquired legally, at the time of Bentham’s death. However it was not yet law.

Both Bentham and Dr. Southwood Smith believed the laws against dissection were silly, and even counterproductive, making it extremely difficult for physicians to advance their craft, or even sometimes just get adequate training in internal anatomy. (To get around this problem, medical schools often secretly purchased bodies from grave robbers, and sometimes from murderers claiming to be grave robbers.)

In any event, Dr. Southwood Smith performed the illegal dissection of Bentham’s body as a part of an anatomy lecture, attempting to fulfill the requirements of the Will by removing all of the soft tissue in and on Bentham’s body. The good doctor then wired the skeleton together with copper wire and pins. It was dressed in a set of Bentham’s clothes, including a black coat, before being stuffed with hay and lavender to fill out his figure. The body was eventually bolted to the chair.

Bentham planned for his head to be preserved as well, but this didn’t work out. Dr. Smith removed the head from the body and attempted to preserve it via a method of  desiccation used by the Maori of New Zealand. But when the procedure was complete, the head did not take on the same hardness of those preserved by the Maori and the dehydration removed any expression from the face, as well as made it look somewhat grotesque. To get around the issue, Dr. Smith had a wax head modeled after a bust and pictures of the philosopher. When it was completed, the wax head was affixed to the skeleton with a metal spike.

Bentham’s skeleton and its box, referred to as the Auto-Icon, remained in the possession of Dr. Southwood Smith until 1850, when the University College London received it. The box remained untouched in a secluded location of the university until around 1898, when the Curator of the Museum and Professor George Thane removed it from the box for examination. They observed a layer of dust and moth-eaten clothes, but they also made a significant discovery. Upon opening up the clothes to examine the skeleton and hay used to fill out the garments, they found Bentham’s real head wrapped inside a cloth and located inside his abdomen. They placed his head on the floor between his legs when the Auto-Icon was returned to the box.

There the head remained until 1948 when it was placed in a box to give it an added layer of protection. Since the wooden box was too large to fit inside the larger one with the Auto-Icon, it was first placed on top of the Auto-Icon box, and then above a doorway in the Cloisters that led to a staircase. But as often happens with college students, the head was an easy target for pranks and was frequently stolen. One of the most famous cases of theft occurred in 1975 when students from King’s College London took the head and asked for a ransom of £100. That money was to be paid directly to a local shelter. The University College London offered £10 instead, and the head was returned.

Finally fed up with the thefts of the great philosopher’s head, it was placed in storage in the Strong Room of the Records Department in late 1975. Thirty years later, in 2005, it was moved to the Institute of Archaeology. Today it is located in the Conservation Safe where it is only removed for specific academic inspection.

As for the Auto-Icon, it resides in the South Cloisters of University College’s main building, where the doors of the box are opened around 8 AM every morning and closed around 6 PM each night.