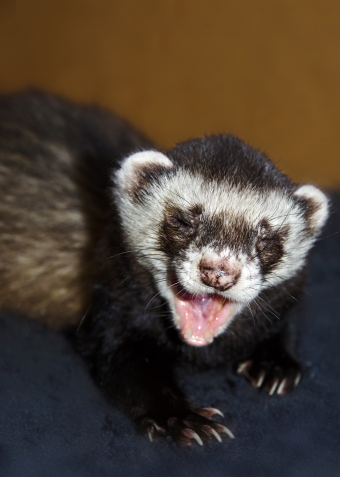 Falling under the category of “What could go wrong?” is the sport of ferret legging. Simple in its design although painful to master, the sport simply requires a man, a pair of baggy trousers and two live ferrets.

The trousers are secured at the ankles, and, after the ferrets are set free in them, secured at the waist as well. Underwear of any kind is prohibited, and the animals must be free to roam from leg to leg. Neither the contestants nor the animals may be drugged or drunk.

After the match begins, the contestants stand in front of the judges and the last man standing (they’re pretty much always men) wins.

Note that the ferrets must have a full set of claws and teeth, and neither can be filed or blunted in any way. Between these, they can wreak a fair amount of havoc on delicate human flesh, particularly once their instincts to bite and dig kick in. Plus, as with other carnivores, once the victim (or rather, contestant) begins bleeding, the ferret’s blood lust can trigger attempts to feed.

The sport has unknown origins but at the least was partially popularized by coal miners in Yorkshire, England in the 1970s, and for several years the ferret legging record stayed (understandably) under two minutes. Then, in 1977, Edward Simpkins is said to have set a new record in excess of five hours; however, for the first four hours he only had one animal in his pants.

Undoubtedly, the greatest ferret legger of all time is Reg Mellor, a retired Yorkshire miner, who set the record at five hours and 26 minutes on July 5, 1981. Employing ferrets to hunt in the open valleys around his home for many years, Mellor claimed that he had routinely kept the animals in his trousers to keep them dry and warm when it rained. He said part of the secret to his success was to feed the ferrets well before putting them in his pants.

That’s not to say the ferrets didn’t do their share of damage to him.  After dropping his drawers for a reporter doing a story on Reg, it was observed that his legs were “crosshatched with scars.” When asked if the ferrets ever bit his more sensitive bits, Reg replied, “I had ’em hangin’ from me tool for hours an’ hours an’ hours!” And that another key to becoming a champion at this particular sport is to “be able to have your tool bitten and not care.”

Reg’s near three decade run as the record holder in ferret legging was finally ended in May of 2010 by Frank Bartlett of Whittington, England who set the new record at five hours and 30 minutes, using the sport as a fundraising opportunity for his village’s first responders.