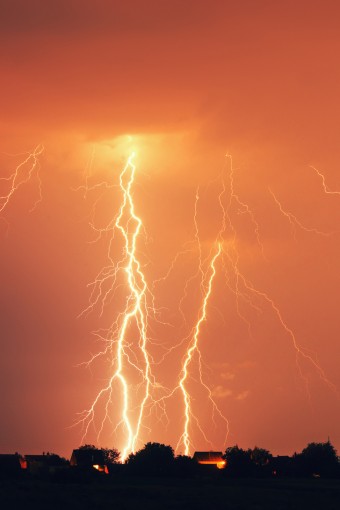 It seems that no one’s ever suggested to Mother Nature that she do anything in moderation…sort of like how Felix the Dog gobbles up treats at the BRI.

The Catatumbo River in Venezuela is the site of a continual lightning storm. More than 160 nights a year there’s a light show in the sky above the spot where the river empties into Lake Maracaibo. On those nights, thousands of lightning bolts flash 16 to 40 times a minute for 10 hours at a time. And it’s been that way for centuries.

Throughout history, sailors have relied on the lights for navigation. Called the “Beacon of Maracaibo,” the storms can be seen as far as 200 miles away.   In 1595, they revealed the presence of Sir Francis Drake’s ships trying to sneak up on the Spanish garrison at the city of Maracaibo. Venezuelans even credit the lightning with guiding their navy when they fought against Spain for independence in the early 19th century.

So what accounts for these near-constant lightning storms? For one thing, the area is ringed with mountains that trap warm rising winds that are filled with moisture collected from the evaporating waters of the river and the lake. As they rise, it puts them on a collision course with the heavy, frigid air coming down from the high Andes.   It’s a type of wind collision that’s a recipe for thunderstorms. Some scientists have added another element to the mix: the theory that ionized gases rising from decaying matter in marshes and oil deposits also encourage the lightning in the storms because they give off electrical discharges.

Stromboli is one of the eight Aeolian Islands, a chain of volcanic islands that lie just north of Sicily. The island is home to about 500 residents as well as the most active volcano on earth: Mount Stromboli, which has been erupting pretty much nonstop for more than 2,000 years (making it the longest-erupting volcano on earth). Just over 3,000 feet above sea level, the volcano has been nicknamed the “Lighthouse of the Mediterranean” because its fiery eruptions can be seen for miles.

Mount Stromboli typically explodes every 15 minutes, ejecting lava sprays, “lava bombs” (blobs of lava), and hot rocks. Its eruptions are so famous that when other volcanoes explode in a similar way, it’s called a “Strombolian” eruption: a mild explosion that produces molten rocks and ash. But don’t be lulled into a false sense of security. Tourists who come to enjoy the fireworks have been-on occasion-injured or killed by sudden violent explosions, flying rocks, or cave-ins.

Some of the more violent eruptions cause landslides along the southeastern slope of the volcano, which is called La Sciara del Fuoco (“steam of fire”). In 2002 an explosion sent such large amounts of rock into the sea that it caused two tsunamis. Buildings on the island were damaged, but luckily they were no fatalities. Geologists warn that someday-though they don’t know when- La Sciara del Fuoco could collapse. If that happens, the tsunami will be so large that the island will be completely destroyed.

The driest non-polar desert on earth- the Atacama Desert- stretches 600 miles north to south along the coast of Chile between the Pacific Ocean to the west and the Andes Mountains to the east. The Andes prevent rain clouds from reaching the Atacama; in fact, some places in the central desert haven’t seen even a drop of rainfall since records have been kept. On average, though, the desert gets an average annual rainfall of a measly ½ inch or so.

Geological and mineralogical studies show that the Atacama has been arid for more than 20 million years, which makes it the world’s oldest stretch of desert. In fact, in many spots the Atacama is so barren that there aren’t even any flies because there’s nothing for them to eat. Some moisture- in the form of fog from the Pacific Ocean- does reach parts of the Atacama. There, cacti and desert animals survive by taking in the droplets of liquid formed by the fog.

But the driest desert may eventually lose that distinction due to climate change. In 2012, for the first time since weather records have been kept, the Atacama was hit with four days of rain so heavy it caused floods and mudslides.

In the summer of 2001, people who were out in a rainstorm in Kamala, India, found themselves drenched in what looked like blood.   The red rains lasted until September, when they simply disappeared. Scientists, of course, got busy looking for an explanation. The first theory they came up with was that the rain had created red dust. That theory died out when no meteor debris was found in rain samples. Then in 2006 physicists theorized that biological material from outer space could have been swept into the atmosphere via a comet. Headlines like “Rain Could Prove That Aliens have Landed” filled the international press.

But an Indian government analysis ultimately discovered the real-and less dramatic-culprit: algae spores. A type of algae (part of the Trentepohlia genus) creates a red-orange lichen that grows on Kamala’s trees, and in 2001 weather patterns caused a profusion of them.   The spores were probably carried into the rain clouds in a warm updraft of air- it’s estimated that a ton of them fell to earth again in Kamala’s rain of blood.

Lituya Bay is a nine-mile-long fjord on the Alaskan panhandle, about 120 miles from Juneau.   Part of it sits above the Fairweather fault, one of the world’s most active. On July 9, 1958, a powerful earthquake struck Alaska along that fault line, the effects of which were felt for 400,000 square miles-even as far south as Seattle, about 900 miles away. The epicenter of the quake was only 13 miles from Lituya Bay in the State’s southeast corner.

At the head of the bay is Gilbert Inlet, surrounded by high cliffs and glaciers, and that’s where the earthquake caused a landslide that sent 40 million cubic yards of rock and glacier ice into the water some 3,000 feet below. The massive landslide triggered a huge tsunami…the largest wave in recorded history. It was 1,720 feet high-taller than the Empire State Building. The crashing wave ripped out all the vegetation, including millions of trees, in its path. Fortunately the area was isolated at the time, and the bay was used mainly by fisherman as a temporary harbor.   So only five people died in the disaster.

In 2008 Norwegian sailor Oyvind Tangen posted several photographs on the Internet that he had taken while aboard a ship in the Southern Ocean, about 1,700 miles south of South Africa. The images showed large icebergs with one or more striking, colorful bands-including blues, greens, yellows, and reds- striped across the icebergs’ curving contours. At first, people thought Tangen had doctored the images, but the phenomenon had since been confirmed and explained.   The bands are formed when the ice is still part of an ice shelf and are caused by the layered buildup of dead marine life (plankton, krill, etc.), each of which forms its own unique colored layer. When a chunk of ice breaks off a shelf and becomes an iceberg, the cross-sectioned layers appear as colorful stripes. 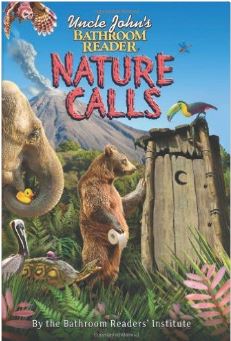