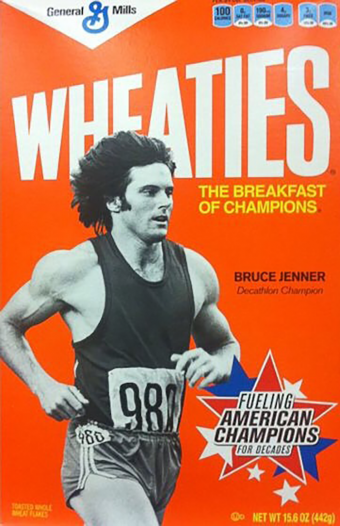 The road to Bruce Jenner’s record-breaking gold medal in 1976 began at the 1972 Olympics in Munich, Germany, where he placed tenth in the decathlon. After the event, he reportedly approached the champion Nikolay Avilov of the Soviet Union, looked him straight in the eye and told him, “Next time, I’m going to beat you.”

Bruce’s training was unorthodox. He worked separately with the best athletes in the decathlon’s disciplines. Jenner explained his reasoning to Dave Anderson of The New York Times, “If you train with a decathlon man, you can’t visualize that you can do much better. But if you throw the discus with Mac Wilkins or throw the shot with Al Feuerbach, then they’re 20 feet ahead of me. You learn much more that way.”

By the time the 26-year old Jenner reached Montreal, he had twice won the Amateur Athletic Union decathlon (in 1974 and 1976) and was the champion of the 1975 Pan American Games. In addition, he was also the current world record holder, a feat he achieved in Eugene, Oregon at the USA-USSR joint track meet in August 1975.

Jenner was on a roll, and a favorite to take the gold – and the title from Avilov as he had promised – in 1976.

Although things looked rather grim for Bruce after the first day of competition, Jenner remained confident. He knew all of his best events were slated for the second day. And on July 30, 1976, everything went off just as he had hoped –and then some. He ran his hurdles well, pole vaulted his way to a personal best, threw the discus and javelin like a boss, and ran the last 300 meters of the 1,500 meter race like lightning to seal the deal.

Jenner finished with 8,617 points, winning the gold medal and setting a new world record. After his Olympic triumph, he was America’s golden boy with movie and endorsement deals rolling in. Jenner was voted the 1976 AP Male Athlete of the Year, and there was, of course, that famous Wheaties box adorning everyone’s breakfast table.

On June 1, 2015, 65-year-old Bruce Jenner broke another world record when he officially announced he would now be known as Caitlyn Jenner and amassed one million Twitter followers in just four hours. The tweet read: “I’m so happy after such a long struggle to be living my true self. Welcome to the world Caitlyn. Can’t wait for you to get to know her/me.”