July 21, 2015 Melissa
R. Cantos asks: I was just wondering who came up with the expression “piss like a racehorse”? 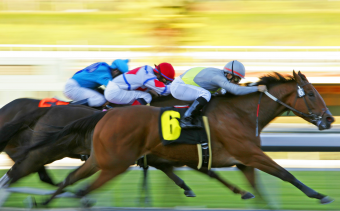 When most horses take a leak, it is a dramatic sight, with the stream typically about one-third to one-half an inch in diameter, creating a veritable “river” of urine that seems to have impressed some wordsmith sufficiently to coin the phrase, “piss like a (race)horse” – today denoting a full human bladder that needs emptied yesterday. Although authoritative sources for the expression’s origins are non-existent, luckily, the tools of the modern world are at our fingertips to try to track down the origin and progression of this rather uncouth phrase.

To begin with, a version of the expression was born sometime just after the mid-20th century. At this point, the combustion engine had long since supplanted horse power for transportation and other work, which is perhaps why there aren’t other variants that include things like “piss like a carriage horse” or “plow horse.”

So when, specifically, is the first documented instance of this expression? It has been claimed that it was in Richard Le Mon’s 1972 poetry collection The Needles’ Balance. However, the somewhat suspect source for that does not provide any information on where in said book this occurs, nor what the exact text is. Further, if this is correct, it would place it a full decade before any more readily verifiable documented instance of the exact phrase. (As no digital version of the book exists and I couldn’t get a hold of a copy (yet), we’ll leave that for now.)

But, in the end, it doesn’t necessarily matter in tracing the ultimate origin of the phrase if The Needles’ Balance was first.  You see, the original expression was not “piss like a racehorse,” but rather “piss like a horse.” The first known documented instance of this appears to be in Issues 6-7 (page 27) of the 1969 New American Review. In it, the following text appears, “the noise of straining tractors, uncles who were proud they could piss like a horse, and who ingested certain liquids to permit them to continue to…”

After this, the phrase “piss like a horse” appeared in numerous works of the 1970s and beyond.

The first instance of specifying a “racehorse,” rather than just any horse, that I could find and verify wasn’t until the 1982 Groundrush by Greg Barron, in which he writes “He unzipped his fly and pissed on the insect. Piss like a racehorse. That’s what Pap would recommend- Pap who loved horses and dogs far more than he loved people.”

As to why the switch from just any horse to a racehorse occurred, this is anybody’s guess. It has been speculated that the “race” part was included as it implies urgency, hence the meaning of “urgent need to urinate.” However, the first documented instances of the exact expression have the same meaning and usage as the original “piss like a horse”- urinate a massive amount, rather than specifically referring to the pressing need to urinate a massive amount. So it may actually be the other way around, with the meaning shifting to implicate urgency coming later as a result of the already included “racehorse.”

It also has been noted that “racehorse” just sounds better than “horse” in the expression, not unlike a common alliterative variant that has popped up since, “Piss like a Russian racehorse.”

The transition from “horse” to “racehorse” has also been correlated with the fact that in the early 1970s the drug furosemide began to be legalized in horse racing on race day, first in 1974 in Maryland and spreading from there.

The first known use of it in horse racing, however, was about a decade before this when veterinarian Alex Harthill, “Derby Doc,” gave legendary race horse Northern Dancer a dose before the Kentucky Derby. Northern Dancer went on to win by a nose over Hill Rise.

So what does this have to do with horses’ urinating and why was it given to Northern Dancer and then many, many other race horses since? Furosemide greatly reduces the incidences of exercise-induced pulmonary hemorrhaging. As such, it became a very desirable thing to give to race horses to curb this potential problem.

More important to the topic at hand is that the drug is a major diuretic; a horse given this expels massive amounts of urine (potentially several gallons in an hour) relative to their normal output (a few quarts every few hours). The perceived benefit of this is that the horses can be induced to shed some quick pounds before the race and the net effect, besides the major benefit of reducing instances of pulmonary hemorrhaging, is thought to be better race times.

So it has been speculated that the rise of the use of this drug in the 1970s in horse racing may have seen the expression transition from “piss like a horse” to “piss like a racehorse” – the latter expelling drastically more urine directly before races when on furosemide than their non-doped up brethren. From there, the expression evolved to not just mean the act of expelling a massive amount of urine, but more commonly used today to imply the urgent need to do so.