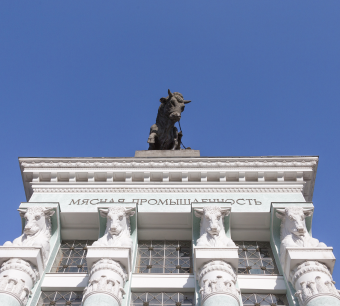 On March 3, 1876, one Mrs. Crouch was working in her yard in Bath County, Kentucky, making soap, when suddenly “meat which looked like beef began to fall all around her. The sky was perfectly clear at the time.” Falling like large snowflakes and settling all around the 5000 square foot yard, pieces of flesh ranging in size from about two inches square to four, dotted the ground and were even stuck on the fences. When it first appeared, the meat was said to be fresh, and, accordingly, two unidentified (but brave) men even sampled it. They claimed it tasted a bit gamey – like mutton or even venison.

The story was published in the New York Times on March 9th, and it caught the attention of Leopold Brandeis who was able to get his hands on a sample that had been preserved in glycerine. After examining it, Brandeis declared that the meat wasn’t a supernatural phenomenon, or in fact, according to him, even meat at all, but a substance called nostoc.

Nostoc has been known to scientists since at least the 16th century when it was named by Paracelsus. As with the Kentucky shower, early on people believed that nostoc fell from the sky in large chunks (or more rightly blobs), and to medieval people it was known as “witch’s jelly” and “troll’s butter.”

Technically a genus of cyanobacteria that live in colonies, it’s not clear when people realized that nostoc does not, in fact, come from the sky, but rather lives in the soil and on moist surfaces. When dry, it is easy to overlook nostoc as it appears as a dark, flaky crust; however, after a rain, nostoc will swell up into jelly-like masses. This led people to think it fell from the sky with rain, thus one of its nicknames “star jelly.”

Edible and said to taste like chicken or frog, Brandeis was convinced that the Crouch’s had nothing more than bacterial blobs on their hands; however, although his theory accounted for some of the details in the report, he had overlooked two important points – eye witness testimony claims they actually saw the substance falling from the sky and it was a clear day with no rain.

Further investigations were also conducted, including one by histologist, Dr. A. Mead Edwards, who also examined the chunks. He concluded that the substance was definitely not nostoc, but rather hunks of flesh. From the tissue samples he had, it appeared to come from the lungs of either a horse or a human baby.

Finally, one man provided a theory that covered all of the facts. L. D. Kastenbine, M.D., a Professor of Chemistry at the Louisville College of Pharmacy, published an article on the matter that same year in the Louisville Medical Journal. Kastenbine concluded that the best explanation was that supplied by an old Ohio farmer: the meat had been vomited by several vultures who were flying too high to be seen (some varieties of vulture can fly as high as 40,000 feet; for reference Mount Everest is about 29,029 feet). Given that the chunks fell from a great height, they were scattered by the wind over a relatively large area.

Both the turkey vulture, Cathartes aura, and the black vulture, Coragyps atratus, are found in that part of Kentucky, and both have been observed projectile vomiting the contents of their stomachs, sometimes in or just before they take flight. They particular do this in the presence of a predator, with the discarded contents of their stomachs simultaneously distracting the predator while also lightening the vulture’s load for flight. When one vomits, this also often induces others nearby to vomit as well.  As to why this particular flock of vultures chose to vomit mid-flight is anybody’s guess, but at least the theory seems the most plausible explanation for this bizarre phenomenon.