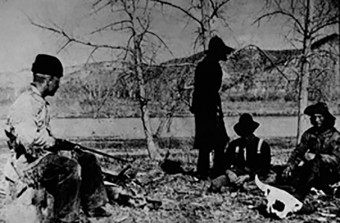 Along with serving two terms as the President of the United States between 1901 and 1909, Theodore “Teddy” Roosevelt also had a laundry list of supremely manly escapades throughout his life, such as the time he was shot in the chest in an assassination attempt, but went ahead and gave a lengthy speech he’d planned anyway before seeking medical attention. (More on this in the Bonus Facts below) Another such story he was often fond of telling came from his brief stint as a deputy sheriff for Billings County, North Dakota.

Originally Roosevelt only travelled to what were then the badlands of North Dakota to hunt buffalo in 1883, but the future president became so enamoured with frontier life and the beauty of the natural landscape that he decided to build himself a log cabin, buy a few cows and tend to the herd as a way of escaping the monotony of everyday life in New York City. Since we’re talking about Teddy Roosevelt, a man who never did things halfway, when we say he “bought a few cows” to serve his new hobby of ranching, we of course mean that he bought several hundred. These cows were left under the care of the Chimney Butte ranch, of which Roosevelt bought a considerable steak. (pun intended)

Roosevelt being Roosevelt reportedly loved being a cowboy and he threw himself into any and every job the ranch required whenever he visited.

When Roosevelt casually bought a few hundred more cows a year later in 1884, he established the Elkhorn Ranch so that he’d have a place to store them all. As for why Roosevelt doubled-down on his little ranching hobby, it’s believed it was as a result of the fact that Roosevelt’s wife, Alice, died of undiagnosed kidney failure shortly after giving birth to their daughter Alice in 1884. This was on the same day and in the same house that his mother died of typhoid fever, just 11 hours earlier. In response, he simply put a giant X in his journal and wrote one sentence under it: “The light has gone out of my life.”

It was during his tenure as a rancher that Roosevelt also decided to try his grizzled hand at being a lawman, and although the post of deputy sheriff didn’t offer any pay save for remuneration on any travel costs incurred while on duty and a small stipend for any arrests made, Roosevelt nonetheless dedicated himself to this job with the trademark go-getting, no-nonsense attitude that would later become synonymous with his presidency.

In particular, Roosevelt felt that he had a moral duty to ensure criminals should receive a fair trial at the hands of the law and he was absolutely dogged in his determination when it came to pursuing those who’d committed any act of wrong doing, something he was only too happy to prove in March of 1886 when he was informed that the only boat on his ranch (and for many miles around) had been stolen. The boat in question was what Roosevelt used to cross the Little Missouri River to hunt and tend to his cattle.  According to Roosevelt,

We had no doubt as to who had stolen it; for whoever had done so had certainly gone down the river in it, and the only other thing in the shape of a boat on the Little Missouri was a small flat-bottomed scow in the possession of three hard characters who lived in a shack, or hut, some twenty miles above us, and whom we had shrewdly suspected for some time of wishing to get out of the country, as certain of the cattlemen had begun openly to threaten to lynch them. They belonged to a class that always holds sway during the raw youth of a frontier community, and the putting down of which is the first step toward decent government…

The thieves, who were described by Roosevelt as “a well-built fellow named [Michael] Finnigan“, “a half-breed, a stout, muscular man” called Burnsted and “an old German, whose viciousness was of the weak and shiftless type” called Pfaffenbach, had each been implicated in a number of crimes including cattle rustling, murder and, oddly less forgivable at the time, horse theft. The thieves had apparently stumbled upon Roosevelt’s boat while absconding from a nearby crime scene, reasoning that nobody could follow them down the river which was currently almost impassable due to a combination of a storm and severely icy weather resulting in much of the river being frozen. 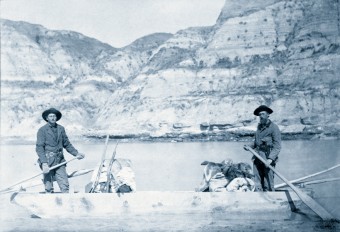 Although the boat itself was of relatively little value, only being worth about $30 ($750 today), and the weather was dangerously bad, Roosevelt felt that by not pursuing the thieves, he would be ignoring his moral obligation as a lawman to pursue any criminal. Further, he reasoned,

In any wild country where the power of law is little felt or heeded, and where every one has to rely upon himself for protection, men soon get to feel that it is in the highest degree unwise to submit to any wrong…no matter what cost of risk or trouble. To submit tamely and meekly to theft or to any other injury is to invite almost certain repetition of the offense, in a place where self-reliant hardihood and the ability to hold one’s own under all circumstances rank as the first of virtues.

So as soon as he became aware of the theft, he called on his two most trusted ranch hands, Bill Sewall and Wilmot Dow and informed them that they were going to hunt the thieves down; a bold claim considering the thieves had stolen his only viable means of transport for such an endeavour and that the ranch was currently in the middle of an ice storm that had already killed 60% of the cows Roosevelt owned. Catching up to the thieves on horseback in that weather simply wasn’t an option.

Roosevelt and his companions spent the next three days building themselves a brand new boat with which to pursue the thieves down the icy river. Yes, Roosevelt built himself a new boat just to track down and arrest the men who’d stolen his other boat, even though it would be at great risk to his own life from the combination of the weather, potentially hostile Native Americans in the region, and that the men he was hunting were well armed and would have little qualms about simply shooting him and leaving his body where no one would ever find it.

Using his skills as an expert hunter, Roosevelt was able to easily track the thieves down river and find their camp, which he happened to stumble upon while two of the thieves were gone hunting. Given that the thieves had not expected any pursuit, having stolen the only boat for many miles around and that catching up by horse in that weather would have been impossible, they were lax, allowing his group to easily ambush the third member of the posse. As Roosevelt said, “The only one in camp was the German, whose weapons were on the ground, and who, of course, gave up at once…”

made him safe, delegating one of our number to look after him particularly and see that he made no noise, and then sat down and waited for the others. The camp was under the lee of a cut bank, behind which we crouched, and, after waiting an hour or over, the men we were after came in. We heard them a long way off and made ready, watching them for some minutes as they walked toward us, their rifles on their shoulders and the sunlight glinting on the steel barrels. When they were within twenty yards or so we straightened up from behind the bank, covering them with our cocked rifles, while I shouted to them to hold up their hands – an order that in such a case, in the West, a man is not apt to disregard if he thinks the giver is in earnest. The half-breed obeyed at once, his knees trembling for a second, his eyes fairly wolfish; then, as I walked up within a few paces, covering the centre of his chest so as to avoid overshooting, and repeating the command, he saw that he had no show, and, with an oath, let his rifle drop and held his hands up beside his head.

Rather than shooting or hanging the men on the spot, which he was entirely within his rights to do, Roosevelt vowed that each man would receive a fair trial.

Originally Roosevelt’s group had planned to float down river with the thieves to the nearest town, Dickinson, (going upriver wasn’t an option with the swift current) but this plan soon had to be abandoned as the river was simply too frozen over for the journey to be completed.  At first, they thought to wait it out to see if the ice would break up enough to again allow for travel. Roosevelt noted,

The next eight days were as irksome and monotonous as any I ever spent: there is very little amusement in combining the functions of a sheriff with those of an arctic explorer. The weather kept as cold as ever…. We had to be additionally cautious on account of being in the Indian country, having worked down past Killdeer Mountains, where some of my cowboys had run across a band of Sioux – said to be Tetons – the year before. Very probably the Indians would not have harmed us anyhow, but as we were hampered by the prisoners, we preferred not meeting them; nor did we, though we saw plenty of fresh signs, and found, to our sorrow, that they had just made a grand hunt all down the river, and had killed or driven off almost every head of game in the country through which we were passing. 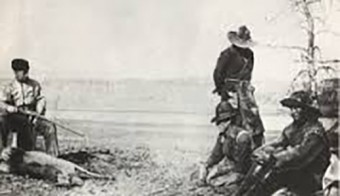 Low on supplies, they decided to split up, with Roosevelt breaking off from the group so he could personally escort all three prisoners to the nearest town, on foot, before they ran out of food.

Since he was the only member of his party left, Roosevelt didn’t sleep for the duration of the almost 40 hour journey across partially frozen, occasionally “ankle deep”, sludge, reportedly keeping himself awake at night by reading Leo Tolstoy’s Anna Karenina while still pointing a shotgun at his prisoners so they couldn’t sneak away or kill him and then be happily on their way.

What makes this more impressive is that none of the prisoners were cuffed or bound in anyway during their transport. You see, the weather was so cold that Roosevelt was worried they would succumb to frostbite if he tied them up at night, so he simply decided to keep ever vigilant while escorting the three prisoners, who were no doubt looking for any opportunity to overpower their lone captor, the last stretch of the journey.

After travelling (from the start) some 300 or so miles across the roughest terrain imaginable in bitterly cold weather, Roosevelt was “most heartily glad when we at last jolted into the long, straggling main street of Dickinson, and I was able to give my unwilling companions into the hands of the sheriff. Under the laws of Dakota I received my fees as a deputy sheriff for making the three arrests, and also mileage for the three hundred odd miles gone over – a total of some fifty dollars.”

Roosevelt would later go on to write about this escapade in one of his many excellent books, Ranch Life and the Hunting Trail.

If you liked this article and the fascinating Teddy Roosevelt Bonus Facts below, you might also enjoy: