This Day in History: April 24th- The Story of One of the Greatest Libraries in the World 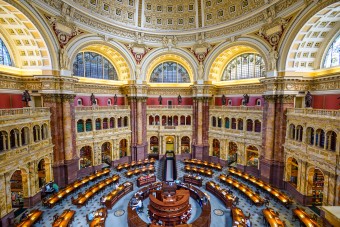 On April 24, 1800, President John Adams established the Library of Congress by approving legislation to appropriate $5,000 (about $68,000 today) “for the purchase of such books as may be necessary for the use of Congress … and for fitting up a suitable apartment for containing them.”

The legislation was enacted along with the transfer of the U.S. capital from Philadelphia to Washington, D.C.

The library’s original catalog from April 1802 contained a total of 942 volumes and nine maps. Unfortunately, invading British troops attacked the Capital Building in August 1814 and burned the fledgling 3,000 volume Library of Congress to the ground.

Former President Thomas Jefferson offered the library he had spent 50 years building as a replacement. It was considered one of the finest in the United States, but he expected a certain amount of controversy over the wide range of subjects in his collection.

Jefferson’s books included topics as diverse as science, literature, philosophy and other subjects not normally deemed as appropriate for a legislative library. But Jefferson wrote, “I do not know that it contains any branch of science which Congress would wish to exclude from their collection; there is, in fact, no subject to which a Member of Congress may not have occasion to refer.”

His countrymen agreed, and in January 1815 Congress accepted Jefferson’s offer. His collection became the cornerstone for the re-born Library of Congress. The belief that all topics are an integral part of the American legislature’s library became known as the Jeffersonian concept of universality.

Jefferson’s ideals were applied on a grand scale during the 1800s, and the Library of Congress grew to be a renowned national institution. A shortage of shelf space led to the construction of a new building for the library inspired by Italian Renaissance design. When it opened on November 1, 1897, it was immediately hailed as a national treasure and the “the largest, the costliest, and the safest” library in the world.

Today, the Library of Congress is spread over three buildings. It contains over 29 million books, 58 million manuscripts, and 130 million cataloged items in 460 languages. It also houses the largest collection of rare books in North America.

Some of the most notable treasures contained within the Library of Congress include a mint copy of the Gutenberg Bible, one of the three remaining in the world. The oldest surviving written document, a Sumerian cuneiform tablet dating from 2040 B.C.E., is also housed here, along with the earliest motion picture, Fred Ott’s Sneeze, copyrighted by Thomas Edison in 1893. And, of course, the President’s “Book of Secrets”… Kidding… Sort of. In truth, for a short time the Book of Secrets prop used in the second National Treasure movie was on display in the Library of Congress.

The public may use the library for academic research, but only members of Congress, Supreme Court justices, and selected government officials can check books out.