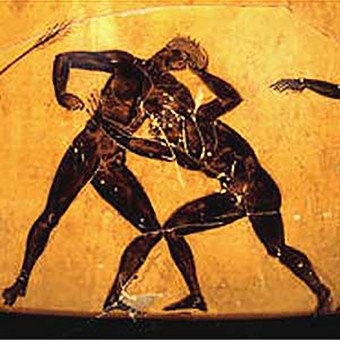 Wrestling for honor and victory can be traced back to a least 4000 years ago, to the ancient civilization of Mesopotamia. The first great work of literature, The Epic of Gilgamesh, was written around 2100 BCE. In it, the two main characters Gilgamesh, king of Uruk, and Enkidu, who was sent by the gods to challenge Gilgamesh over his appalling abuse of power, wrestle, and after become close friends.

The ancient Egyptians used wrestling as a training tool for soldiers. Many scholars believe that the Bible references wrestling in such a way that it expects its readers to understand the sport and its terminology, meaning it was well-established even at the time. Ancient Greeks formally organized wrestling into glorified athletic competition and created wrestling schools, known as palaestras, in nearly every major Greek city. These schools developed the first known professional wrestlers in history.

As paid representatives for the Greek cities they fought for, these wrestlers became symbols of strength and were quite popular. Milo of Croton was possibly the brightest of these wrestling stars. Fighting for his Greek colony in Southern Italy, he won six Olympic wrestling championships, which like today, was held every four years, meaning he was the best for 24 straight years. Legend had it that Milo would train by carrying a calf every day from its birth until its death. Additionally, legend states that he died at the hands of a pack of wolves.

As civilizations matured, wrestling continued to be a part of them. During the Middle Ages, wrestling was a well-known spectator sport in northern Europe. According to the book Ringside: A History of Professional Wrestling in America, these matches were gambled on and all were largely fueled by alcohol.

Despite its popularity, wrestling, along with boxing, began to take a backseat to more “civilized sports” like horse racing as puritans took over Europe. As those puritans made their way to America, these athletic pursuits became less organized. While wrestling often happened in taverns and in schools (in fact, it was said that George Washington was a mighty fine wrestler as a youth), it wouldn’t be until the mid-19th century when we would see the beginnings of what we now know as professional wrestling in America.

A close approximation of today’s American professional wrestling can be found in the French sideshows of the 1830s. These would present wrestlers with names like “Edward, the Steel Eater” or “Gustave d’Avignon, the Bone Wrecker.” Sound familiar? They would go on the road and challenge locals to take them down. In 1870, the first masked wrestler appeared in Paris. His name was simply was “The Masked Wrestler.” Eventually, he would make his way to America and wrestle under his real name, Thiebaud Bauer. He would become one of the most famous wrestlers in America during the late 19th century. Until William Muldoon got to him.

Considered the first great high-profile American wrestler, it was claimed that William Muldoon never lost in his career. He traveled around the country and the world, taking on all challengers. He was known for his grappling technique and his gentlemen attitude. Legend has it that he once stopped a match against a French opponent because the crowd was chanting “Break the Frenchie’s neck!” He proceeded to lecture the crowd on sportsmanship instead of breaking the Frenchman’s neck.

At the turn of the century, Frank Gotch took the mantle as the most popular wrestler in America. Described by writers at the time as “wrestling’s equivalent to boxing’s John Sullivan,” Gotch was an exceptional athlete and a gifted self-promoter. He had a famed move known as the “toehold,” which is exactly what it sounded like. Gotch would meet kings, queens, and presidents, including Teddy Roosevelt. Despite Gotch’s popularity, there was always (and still is) controversy around him, claiming he fought “dirty” – using eye gouging, kneeing, and crotch punching to win matches. It seems he was the first “heel” (wrestling term for villain) in modern wrestling history. This villain status only seemed to heighten his popularity, but that all ended with Gotch’s death in 1917 at the age of 39, with the cause of death rumored to have been syphilis. Wrestling’s popularity tumbled in America and wouldn’t have a grapple hold in the States again until the later half of the 20th century.

Despite this lack of popularity, there was still innovation going on in wrestling. The Gold Dust Trio of Ed “Strangler” Lewis, Billy Sandow, and “Toots” Mandt changed how wrestling was fought in the 1920s. They determined that grappling was boring, so they melded a style using Greco-Roman wrestling, boxing, freestyle, lumber-camp fighting, and theater to create, what they called, “Slam Bang Western Style Wrestling.”

Yes, this is when experts believed wrestling officially became “fake.” They only booked wrestlers who would entertain along with wrestle. As it is today, the wrestlers they booked, they would bring show to show, city to city with them, allowing fans to become familiar with them and for storylines to develop among wrestlers. When the Gold Dust Trio broke up in 1939, the stage was set for the modern era of pro wrestling.

Founded in the late 1940s, The NWA (National Wrestling Alliance) was the governing body for all of professional wrestling, but many promoters, wrestlers, and fans found them to be overbearing, out-dated, and tyrannical. So, several “regional” wrestling organizations broke off and created associations or federations in their own regions, like the AWA in Minneapolis and WWWF in the northeast, created by former Gold Dust Trio member Toots Mandt and Vincent McMahon. They officially became the WWF in 1979.

Soon, with so many regional organizations and no national presence, professional wrestling was on the verge of collapse again. But then the WWF started to consolidate talent and money, culminating in the biggest financial gamble in wrestling history – WrestleMania.

In 1985, the WWF, now lead by Vincent McMahon’s son Vince McMahon, booked the “world’s most famous arena,” Madison Square Garden, to host the “the Super Bowl of wrestling entertainment.” McMahon invited celebrities like Mr. T (to fight in the main event with Hulk Hogan as a his tag team partner), Muhammad Ali, and Cyndi Lauper to be a part of the festivities.

The company’s, and professional wrestling’s, reputation and financial future were all on the line. In front of nearly 20,000 fans and about a million watching on closed-circuit television (the largest closed-circuit television audience at that time), Wrestlemania was a hit, and one of the world’s oldest sports managed to continue on as a popular institution, today growing into over a billion dollar industry.