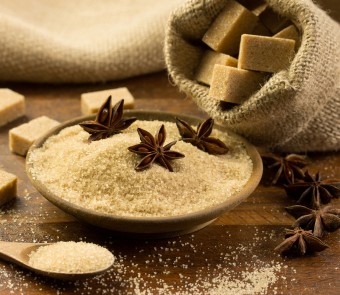 When we say the word “sugar”, it’s highly likely that the first image to pop into your head is that of the ultra-fine, pure white granulated kind you can buy in most supermarkets. But how does this kind of sugar differ from the less popular brown kind, and why isn’t it as prone to forming into lumps as its dusky cousin?

To properly answer this question, we’ll first delve into how sugar (as in common table sugar, rather than other short-chain, sweet, soluble carbohydrates) is produced in the first place, because it’s key to understanding how the white variety differs from brown sugar and why the latter often lumps together. Beyond that, it’s also just interesting.

As you’re probably aware, the common sugar you buy in stores is primarily derived from one of two things- sugarcane (from which it’s estimated 70% of the world’s sugar is produced) and sugar beet. While the refining process for each crop differs slightly, the end product is identical. We say this because you might hear from people (and companies that use sugarcane for their sugar) that sugar from sugarcane is superior to that extracted from sugar beets.  Among other reasons sometimes mentioned, one notable one is because beet sugar can sometimes be derived from beets that have been genetically modified. For those curious, since table sugar is literally just sucrose, the source it’s derived from doesn’t affect the final product in any way, assuming the manufacturer keeps any impurities down to a negligible level, which they do.

In any event, sugarcane and sugar beets are the most common sources of sugar because they contain a high concentration of sucrose that is relatively easy to extract. Sugarcane, for example, is about 10% sugar by weight, meaning for every 10 kilos of sugarcane you harvest, you can reasonably expect to get about 1 kilo of sugar in return, depending on the quality of the cane and the efficiency of the methods used to extract it.

The amount of sugar in a sugar beet, on the other hand, can vary quite a bit, though beets can sometimes contain as much as 17% of their weight in pure sugar. This can change depending on how mature the beets are and where they are grown.

From this, you might think that, in the right regions, beats are the way to go for sugar producers. However, beet farms produce significantly less sugar than cane farms per hectare (7 tons per hectare compared to 10 tons per hectare for sugarcane) because the beets take up more space and are generally more difficult to cultivate as they need to be replanted every single year. In contrast, sugarcane will continue to regrow for years after being harvested as long as the roots of the plant are left undisturbed.

After harvesting, the basic process of extracting sugar from both cane and beets is fairly similar, with the exception that, because beets are physically removed from the ground, they need to be washed, cleaned and sliced before any sugar can be extracted. In contrast, sugarcane is ready to have the sugar extracted almost immediately after being harvested.

After this initial processing is done, both are soaked in water and then crushed to extract as much “juice” from them as possible. This juice is then boiled to removed much of the water from it, leaving behind a thick viscous syrup, which itself is then spun in a centrifuge after some more boiling, separating the pure sugar crystals that form at the bottom from the mixture.

The sugar that forms at the bottom of the mixture will then be dried and bleached, giving it the pure white texture we’re all familiar with, before being packaged and shipped for consumption. The syrupy mixture left over after producing sugar is known as molasses (or treacle in the UK) and it is similarly packaged and sold off after production. However, sometimes manufactures will mix some of this back in with the white sugar producing what most of us would recognise as brown sugar.

The exact amount of molasses added varies from manufacturer to manufacturer, but, for the most part, it falls between 3% and 7% with the latter producing dark brown sugar and the former producing light brown sugar. A third kind of brown sugar, often sold as “natural brown sugar” exists and is made by simply forgoing the extra step of separating the molasses from the sugar in the first place.

Since all kinds of brown sugar contain molasses, which itself contains water, it can dry out which is what causes brown sugar to harden and form into lumps if it is left out in the open or stored improperly. This is a problem that doesn’t occur with white table sugar because, as we already mentioned, it is thoroughly dried before being packaged and shipped. That said, white sugar can become lumpy if it absorbs too much moisture (a common problem in high-humidity environments if the sugar is improperly stored).

In both cases, fixing the problem is as simple as either drying the sugar out, or putting the moisture back in, depending on which kind it is. Common methods for this include, for hardened brown sugar, leaving a slice of bread in a sealed container with the brown sugar overnight. For white table sugar, you can dry it out by placing it in a warm oven for a few hours.