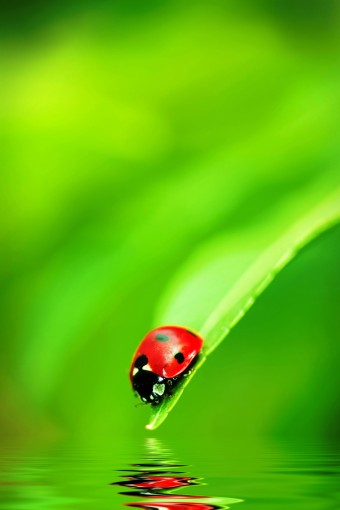 Ladybugs, sometimes known as Ladybirds and less commonly Lady Beetles, are a rarity in the insect world in that they’re one of the few creepy crawly insects we as a species don’t actively dislike, due to their habit of eating the things that destroy our crops. But just how did this little insect get such a strange name?

To start, while many members of the Coccinellidae family are colloquially known as “ladybugs” in a number of places in the states, technically speaking they aren’t considered to be true bugs. It’s more fitting to instead refer to them as beetles. While it’s certainly true that ladybugs possess several key qualities that bugs share, to be classified as a true bug, a given insect must also possess “sucking, beak-like mouth parts and go from egg to nymph, to adult, with no larva stage”. The ladybug neither has the correct mouth parts nor skips the larval stage, so can’t fall under this category. Instead it is, as mentioned previously, a member of the beetle family, a group of insects characterised by hard “shell-like” exteriors that often hides a set of delicate wings.

However, the interesting part here isn’t the “bug” part of “ladybug” name or the “bird” part of the other common name- “ladybird”, with these being somewhat obvious in their origins. The less obvious part is why these tiny voracious beetles have the word “lady” in their name. At first glance, there doesn’t appear any particular reason why this should be the case; the beetles don’t seem to possess any qualities associated with the fairer sex.

It turns out, the ladybug isn’t named for any particular female trait it possesses. Rather, it is named for a specific lady- the Virgin Mary.

Why? This isn’t precisely known. One of the leading theories is that the name came about as a result of the ladybug’s bright red shell, which is not too dissimilar from the red cloak Mary is often pictured wearing in biblical paintings. There’s also an old European legend that states that farmers many hundreds of years ago prayed to the Virgin Mary asking for help to save them from the pests devouring their crops and in return she sent a swarm of tiny beetles bearing her trademark coat to eat them.

In truth, ladybugs are known to dine almost exclusively on insects we humans consider pests, like aphids, something old timey farmers without pesticides or other easy-means of keeping their crops protected from destructive creatures were no doubt incredibly thankful for. Since back in those days it was common to thank God for almost any good fortune, it’s not hard to see how this legend popped up, and perhaps this gratefulness really did contribute to the name.

Whatever the case, as it turns out, people believing the ladybug was a gift from God (or Mary) is supported by the fact that almost every European country ended up coming up with a name for the beetle that linked back to God or Mary. For example, in Germany, the word for ladybug is “Marienkäfer” which translates to “Mary’s Beetle”; in France, one common name is “la bete a bon Dieu” which roughly means “God’s animal” while in Russia a popular name “Bozhya korovka” which translates to “God’s little cow”, no doubt referring to the beetles’ spots which are not unlike the kind you’d find on certain cows. In fact, one of the alternate early names for the beetle, before “ladybug” or “ladybird” in English was “ladycow”.

The earliest mention of the word “ladybird”, referring to the beetle, is noted by the Oxford English Dictionary to have occurred in 1674 in a dictionary of sorts covering southern English words. It was noted in that work that, at that time, a common slang term for the “little spotted beetle commonly called the Lady cow, or Lady-bird” was “bishop”, further demonstrating the strong association people had with these beetles and their religion.