The Rubber Band: Holding It Together Since 1820 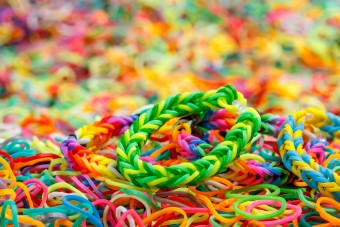 Cheap, reliable, and strong, the rubber band is one of the world’s most ubiquitous products. It holds papers together, prevents long hair from falling in a face, acts as a reminder around a wrist, is a playful weapon in a pinch, and provides a way to easily castrate baby male livestock… While rubber itself has been around for centuries, rubber bands were only officially patented less than two centuries ago. Here now is a brief history of the humble, yet incredibly useful, rubber band.

It has only recently been discovered that Mesoamerican peoples (which includes Aztecs, Olmecs, and Mayans) were making rubber (though they didn’t call it this) three thousand years ago. Mixing milky-white sap known as latex from the indigenous Hevea brasiliensis trees (later called Para rubber trees) with juices from the morning glory vines, they could create a solid that was, surprisingly, quite sturdy. The civilizations used this ancient rubber for a variety of purposes, from sandals to balls to jewelry. In fact, while Charles Goodyear is generally credited with the invention of vulcanized rubber (a more durable and non-sticky rubber compound via the addition of sulfur and heat), it seems that the Aztecs were simply varying the ingredient proportions (between the latex and the morning glory juice) to create different variations in strength.

When Spanish explorers arrived in South America in the 16th century, they discovered for themselves the many uses of this elastic, malleable sap. When the French explorer Charles de la Condamine “discovered” it in the 1740s, he called it “caoutchouc”, a French word, but a variation on the South American word for latex. In attempting to figure out what it was exactly, Condamine came to a wrong conclusion – he thought it was condensed resinous oil. The name “rubber” was only attributed to this latex material when, in 1770, the famed British chemist Joseph Priestley (who also discovered oxygen) noted that the material rubbed pencil marks right off paper, thereby inventing the eraser and giving the “rubbing material” a name. By the end of the 18th century, the material was forever known as “rubber.”

In 1819, Englishmen Thomas Hancock was in the stagecoach business with his brothers when he attempted to figure out better ways to keep his customers dry while traveling. He turned to rubber to develop elastic and waterproof suspenders, gloves, shoes, and socks. He was so enamored with the material that he began to mass produce it, but he soon realized he was generating massive amounts of wasted rubber in the process. So, Hancock developed his “Pickling machine” (later called a masticator) to rip up the leftover rubber into shreds. He, then, mashed the malleable rubber together, creating a new solid mass, and put it into molds to design whatever he wanted. One of his first designs were bands made out of rubber, though he never marketed or sold them, not realizing the practically of rubber bands. Plus, vulcanization hadn’t been discovered yet (which we will discuss in a moment), so the bands would soften considerably on hot days and harden on cold days. In short, these rubber bands simply weren’t very practical at this stage of the game, in terms of many of the types of things rubber bands would later be used for. Hancock didn’t patented his machine or the shreds of rubber it produced, instead hoping to keep the manufacturing process completely secret. This would end up being a rather large mistake.

By 1821, Hancock had perfected his machine, though he would keep it secret for about ten years, in an attempt to dominate the market. In fact, that is why he called it a “pickling machine,” to throw everyone off the scent. It worked. Hancock turned rubber into a commercially practical item and he dominated the market for the next twenty years.

In 1833, while in jail for failure to pay debts, Charles Goodyear began experimenting with India rubber. Within a few years, and after he got out of jail, Goodyear discovered his vulcanization process. Teaming with chemist Nathaniel Hayward, who had been experimenting with mixing rubber with sulfur, Goodyear developed a process of combining rubber with a certain amount of sulfur and heating it up to a certain point; the resulting material became hard, elastic, non-sticky, and relatively strong. A few years later, in 1844, he had perfected his process and was taking out patents in America for this process of vulcanization of rubber. He then traveled to England to patent his process oversees, but ran into a fairly large problem – Thomas Hancock had already patented the nearly identical process in 1843.

There seems to be conflicting reports on whether Hancock had developed the vulcanization process independently of Goodyear or if, as many claim, that he had acquired a sample of Goodyear vulcanized rubber and developed a slight variation on the process. Either way, Hancock’s patent stopped Goodyear from being able to patent his process in England. The ensuing patent battle dragged on for about a decade, with Goodyear eventually coming to England and watching in person as a judge proclaimed that, even if Hancock had acquired a sample prior to developing his own process for this type of rubber, as seems to have been the case, there was no way he could have figured out how to reproduce it simply by examining it. However, famed English inventor Alexander Parkes claimed that Hancock had once told him that running a series of experiments on the samples from Goodyear had allowed him to deduce Goodyear’s, at the time, unpatented vulcanization process.

But in the end, in the 1850s the courts sided with Hancock and granted him the patent, rather than Goodyear, quite literally costing Goodyear a fortune; had they decided otherwise, Goodyear would have been entitled to significant royalties from Thomas Hancock and fellow rubber pioneer Stephen Moulton.

Though he had a right to be bitter over the ruling, Goodyear chose to look at it thusly, “In reflecting upon the past, as relates to these branches of industry, the writer is not disposed to repine, and say that he has planted, and others have gathered the fruits. The advantages of a career in life should not be estimated exclusively by the standard of dollars and cents, as is too often done. Man has just cause for regret when he sows and no one reaps.”

Goodyear, though eventually receiving the credit he deserved, died in 1860 shortly after collapsing upon learning of his daughter’s death, leaving his family approximately two hundred thousand dollars in debt (about $5 million today).

The patent dispute with Goodyear also had a profound, ultimately negative, effect on Hancock as well. As he was entangled in the time-consuming mess for years, others began to reap the benefits on Hancock not patenting his masticator process nor patenting the seemingly useless bands that they created. Specifically, in 1845, Stephen Perry, working for Messers Perry and Co, Rubber Manufacturers of London, filed a patent for “Improvements in Springs to be applied to Girths, Belts, and Bandages, and Improvements in the Manufacture of Elastic Bands.” He had discovered a use for those rubber bands – holding papers together. In the patent itself, Perry distances himself and his invention from the ongoing vulcanized rubber dispute by saying,

While the rubber band was invented and patented in the 19th century, at this point it was mostly used in factories and warehouses, rather than in the common household. This changed thanks to William Spencer of Alliance, Ohio. The story goes, according the Cincinnati Examiner, that in 1923, Spencer noticed the pages of the Akron Beacon Journal, his local newspaper, were constantly being blown across his and his neighbors’ lawns. So, he came up with a solution for this. As an employee of the Pennsylvania Railroad, he knew where to acquire spare rubber pieces and discarded inner tubes – The Goodyear Rubber Company also located in Akron. He cut these pieces into circular strips and began to wrap the newspapers with these bands. They worked so well that the Akron Beacon Journal bought Spencer’s rubbers bands to do the deed themselves. He then proceeded to sell his rubber bands to office supply, paper goods, and twine stores across the region, all the while continuing to work at Pennsylvania Railroad (for more than a decade more) while he built his business up.

Spencer also opened the first rubber band factory in Alliance and, then, in 1944 the second one in Hot Springs, Arkansas. In 1957, he designed and patented the Alliance rubber band, which ultimately set the world rubber band standard. Today, Alliance Rubber is the number one rubber band manufacturer in the world, churning out more than 14 million pounds of rubber bands per year.

So, next time you are shooting a friend with this little elastic device, you can thank the Mayans, Charles de la Condamine, Thomas Hancock, Charles Goodyear, and William Spencer for the simple, yet amazingly useful rubber band.