January 20, 2015 Karl Smallwood
Gracen R. asks: Why is someone who is lazy called a couch potato? 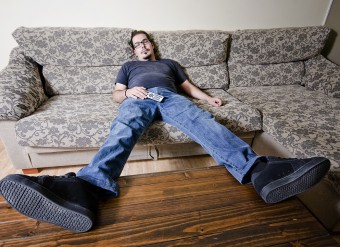 If you want to call someone lazy, a time-honoured way to do so would be to call them a “couch potato”. But why is it we compare lazy people to potatoes and why on Earth did some random guy own the trademark rights to such a silly sounding expression?

Unlike most etymologies, we actually know the exact date that the phrase in question was first written down for mass public consumption as well as the exact date it was first spoken out loud. In regards to the former, the first time the phrase appeared in print was 1979 in an LA Times article where it said, “…and the Couch Potatoes who will be lying on couches watching television as they are towed toward the parade route.” In regards to the latter, according to the man who coined the phrase, he first uttered it during a phone call on July 15, 1976.

More specifically, the man who breathed the phrase into existence is Tom Lacino.  He stated he coined the phrase during “a phone call to a friend. His girlfriend answered, and it was just an off-the-top sort of thing when I said, ‘Hey, is the couch potato there?’ She looked over and there he was on the couch, and she started cracking up.”

Although Lacino claims that there was no real thought behind the phrase, other than that he thought it was a pretty funny way to describe his friend, linguists have noted that the phrase is actually a rather clever play on words. To explain, during the 1970s a popular term for the television was, “the boob tube” which was coined by people who believed watching television was a pursuit only enjoyed by the foolish. Since the edible part of a potato plant is known as a “tuber”, it is commonly believed that the phrase “couch potato” was intended as a clever combination of these two concepts. While that is an incredibly convincing and succinct explanation of the origins of the phrase and is repeated in many an etymological dictionary, we feel it is important to note again that when asked if there was any reason he called his friend a couch potato all those years ago, Lacino offered the verbal equivalent of a shrug in response. Of course, perhaps he simply forgot his reasoning. After all, it’s been nearly four decades since the momentous uttering.

While Lacino was perhaps not initially aware of the playful subtleties behind his utterance, his friend Robert Armstrong certainly was and after hearing the phrase repeated back to him by Tom, Armstrong asked Lacino for permission to turn it into a cartoon.

At the time this was taking place, both Lacino and Armstrong were members of a group calling themselves the “Boob Tubers” which was an orginization created in 1973 in humourous response to a growing health-craze movement in California at the time. In contrast to this movement, the main goal of the Boob Tubers was basically to sit in front of a television and eat junk food. While their goal was certainly a noble one, it didn’t really gain any traction until the phrase couch potato came along.

Armstrong, who was a cartoonist by trade, is the one credited with really pushing the phrase into mainstream lexicon when in 1979 under the new name of “The Couch Potatoes”, he, Tom and several others sailed a float in the Doo Dah Parade (an event meant to parody the more famous Tournament of Roses parade in Pasadena). The float, which literally consisted of nothing more than a few couches pointed at a couple of working TVs on which the group sat for the duration of the parade, was a huge hit and its subsequent media coverage resulted in the first known publicly written use of the term in the aforementioned 1979 LA Times article.

Armstrong, inspired by the success, created a bunch of merchandise around the concept of a couch potato, even going so far as to publish a newsletter aptly called “The Tuber’s Voice: The Couch Potato’s Newsletter“.

Though Armstrong had the foresight to trademark the phrase in 1979, it was simply too popular. Despite his best efforts, the sheer ubiquity of the phrase in media and print meant that he could no longer claim exclusivity to it. As he found out when the New York Times‘ legal department responded to Armstrong’s legal team who stated, “Couch Potato is a registered trademark and not a generic term…”, attempting to get the Times to stop using it as such. The Times legal team responded,

I am afraid that your letter overlooks the fundamental distinction between statements of fact and statements of opinion.  Mr. Safire’s view concerning the wide acceptance of the term “Couch Potato” is clearly an expression of editorial opinion, and, as the Supreme Court has instructed, there is no such thing as a false opinion.  Although you may disagree with this opinion, there is simply no basis for requesting a correction.

Needless to say, neither the New York Times nor other media outlets were moved to stop using the term as a generic slang.