This Day in History: January 28th- O-Rings to Disaster 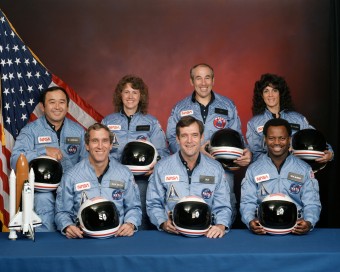 On January 28, 1986, one of the nation’s, and certainly NASA’s, most heart-wrenching tragedies occurred when the space shuttle Challenger blew apart just a minute after lift-off, ultimately killing all on board. This event, which had been anticipated with such optimism, turned into a cause for national mourning almost in the blink of an eye.

President Ronald Reagan was scheduled to deliver his State of the Union address that evening, but in light of the disaster found himself acknowledging the country’s shared sense of loss, “Today is a day for mourning and remembering. Nancy and I are pained to the core by the tragedy of the shuttle Challenger. We know we share this pain with all of the people of our country. This is truly a national loss.”

The accident was especially poignant as one of the crew members was the first “regular” citizen to travel to space, 37-year-old Christa McAuliffe, a social studies teacher from New Hampshire. McAuliffe had been chosen from thousands of applicants and her participation had drummed up a lot of interest in the launch, including schoolchildren across the nation watching live as the Challenger lifted off.

An investigation into the disaster was ordered by Ronald Reagan. The commission was headed by former secretary of state William Rogers, and included pioneering astronaut Neil Armstrong and former test pilot Chuck Yeager. They came to the conclusion that the O-ring seal on the Challenger’s rocket booster failed due to the cold temperature the morning of the launch.

As years have passed, several misconceptions about what happened on January 28, 1986 have begun to be accepted as fact. One of the most persistent falsehoods pertaining to what happened that day is that millions of Americans watched the disaster unfold on live TV. For the most part, this is false. While CNN was indeed carrying the launch live, the majority of Americans in 1986 still did not have cable television, and were watching the launch on network TV. When the shuttle was destroyed, the networks had already cut away, but quickly returned with taped replays of the event after the fact. Of course, as mentioned, most of those who really did see the disaster live were schoolchildren watching on cable TV provided for the event.

As for the crew aboard Challenger after it blew up, it is thought by many that some, if not all, of them were alive after the explosion, and may or may not have been conscious all the way down to impact.

Evidence supporting this notion includes that the forces experienced by those in the crew cabin were not great enough to cause major injury. Further, several switches had been flipped from their launch positions by pilot Mike Smith, which was later determined could not have happened via the forces of the explosion.  As Astronaut Richard Mullane stated, “These switches were protected with lever locks that required them to be pulled outward against a spring force before they could be moved to a new position.”

So, at the least, it would appear Smith was probably conscious for a short while, trying vainly to pilot the remains of the ship.  How long he remained conscious is just a matter of whether the cabin stayed pressurized enough.  Regardless, humans can even survive exposed to the near vacuum of space for an amazingly long time with no long term side effects (see: How Long You Can Survive in Space Without a Space Suit), so whether conscious or not, Smith, at least, was probably alive until the cabin hit the water.  Unfortunately, the craft was traveling at about 207 mph (333 km/h) when this happened, resulting in an impact force at over 200 g’s, instantly killing any (or all) of the crew who’d survived up to this point.