This Day in History: January 12th- All in the Family 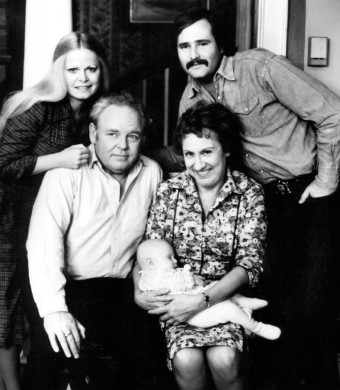 When the very first episode of All in the Family aired on January 12, 1971, CBS ran the following disclaimer immediately preceding it:

The program you are about to see is All in the Family.  It seeks to throw a humorous spotlight on our frailties, prejudices, and concerns.  By making them a source of laughter, we hope to show— in a mature fashion— just how absurd they are.

Although the network obviously believed their new sitcom was going to ruffle a fair amount of feathers, All in the Family was relatively ignored until the summer rerun season. That’s when the show began to earn the reputation that made it one of the most talked about and controversial programs in television history.

All in the Family, based on a British sitcom Till Death Us Do Part, showcased the exploits of working class Archie Bunker (Carroll O’Connor), a conservative bigot who lived in Queens, New York with his sweet but often daffy wife Edith (Jean Stapleton), or “Dingbat.” Their daughter Gloria (Sally Struthers) and her husband Mike Stivic (Rob Reiner), or “Meathead”, a liberal college student, lived with the couple. Ideological differences between the two men provided most of the fodder for conflict.

All in the Family dared to go where no other sitcom had gone before. Aside from the lowbrow humor of Archie belching and off-screen toilet flushing, the show tackled hot-button topics such as racism, politics, cancer, feminism, and even rape. As Jean Stapleton, who so brilliantly portrayed Edith Bunker, pointed out: “There’s nothing like humor to burst what seems to be an enormous problem. Humor reduces it to nothing and wipes it out. That’s what humor does. That was a great part of that show in terms of every issue, but especially bigotry. You make fun of something, it reduces it to nothing.”

Another factor in the show’s popularity was Carroll O’Connor’s skillful handling of the role of Archie Bunker. As bigoted and pigheaded as he was, Archie was generally likable in spite of his many faults. He had a softer, more sympathetic side, especially when it came to his family, a trait that became more evident as the series progressed. (It’s hard to imagine anyone but O’Connor in the role as Archie Bunker, but producer Norman Lear’s first choice was Mickey Rooney.)

The impact that All in the Family had on American television is impossible to overestimate. It paved the way for sitcoms of substance with topical themes, instead of those with fluffy, non-offensive, and predictable plotlines common during the early years of TV. Its influence continues to be felt even though the show is a long distant memory.

When All in the Family wrapped its final episode in March of 1978, the National Museum of American History arrived to collect the famous, familiar, chairs that Archie and Edith had sat in throughout the series. Their new home was in the Smithsonian, “as part of the cultural legacy of our country.”