Calling an Artillery Strike on Your Own Position- The Story of John R. Fox 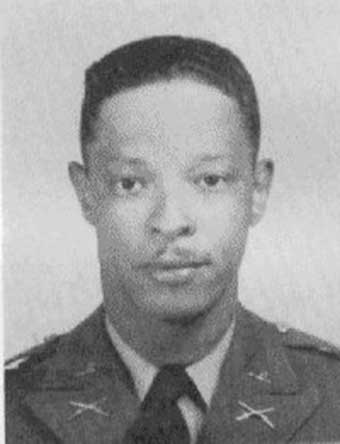 Born in Cincinnati, Ohio on May 18, 1915, John R. Fox grew up in Ohio before attending Wilberforce University, an African American college located in a town of the same name. He met his future wife, Arlene, there while he studied biology and science. The couple moved to Brockton, Massachusetts after getting married, where they had a daughter, Sandra. At the age of 26, Fox joined the U.S. Army at the end of February 1941 and graduated from Infantry School at Fort Benning, Georgia in August, not long before the Japanese attack on Pearl Harbor in December of that year forced the United States to enter World War II.

Three and a half years later, in December of 1944, Lt. Fox found himself working as a forward operator with the Cannon Company of the 366th Infantry Regiment, the 92nd Infantry Division. He was stationed with his unit in the town of Sommocolonia, Italy when German soldiers disguised as civilians snuck into the town on Christmas Day.

The German attack from the outside began at 4:00 am the morning of December 26th. As for the enemy soldiers who’d infiltrated the town the day before, they bolstered the attack and, combined, the two groups managed to quickly overwhelming the American soldiers.

However, when the outnumbered American soldiers began their hasty retreat, Lt. Fox volunteered, along with a few Italian soldiers, to remain behind as eyes and ears in the town. Fox’s job was to direct the artillery stationed outside the town against the German troops with the hope that it would slow their advance long enough to allow for a safe retreat, and re-formation outside of town. So while the American soldiers retreated, Lt. Fox stationed himself on the second floor of a building in a spot that allowed him to see the approaching enemy.

As the day, and the enemy soldiers, progressed, Fox called for the artillery to aim shells closer and closer to his position, matching the German advance.

Finally, just before noon on December 26th, Fox radioed into the Cannon Company’s command post with the request that the artillery be aimed squarely at his position. The soldier manning the radio, Lt. Otis Zachary, and his commanding officer then asked Fox if he knew this strike would destroy Fox’s position. Fox’s reply was, “Fire it!”

Lt. Zachary then ordered the artillery to “Converge, sheath.” That instructed the soldiers manning the artillery to direct their fire in a line, “walking” it toward Fox’s position until they converged on his building. Zachary later said: “That was with high explosive [shells], and that’s the last I heard of John Fox.”

In the end, the attack forced the Germans to delay their advance through the town. The American soldiers then had time to reorganize and launch a full-scale counterattack that allowed them to retake the town from German control. When the soldiers went to recover Lt. Fox’s body and the eight Italian soldiers who’d been killed as well, they also found the bodies of about 100 German soldiers around the wreckage.

For this selfless act of bravery, Lt. Fox’s commanding officer nominated him for Distinguished Service Cross. However, the United States military overlooked his sacrifice, much like they overlooked the contributions of many other African American soldiers during World War II. For instance, the U.S. military awarded the Medal of Honor—the highest honor that can be awarded to a serviceman or –woman—a total of 464 times due to the conflict in World War II with 324 being awarded to soldiers in the Army. None of those soldiers were African American, and the racial bias continued with other awards.

The awards eventually trickled in for Fox though. In 1982, some 38 years after being nominated, he was finally awarded the Distinguished Service Cross. Next up, research conducted by Shaw University in North Carolina, commissioned by the U.S. Army, worked to uncover whether or not African American soldiers had been unfairly denied the Medal of Honor. The results were that, “Shaw’s team… recommended the Army consider a group of 10 soldiers for the Medal of Honor.”  Lt. Fox was among those soldiers recommended, seven of which were ultimately chosen, and six of which were posthumously awarded the medal by President Bill Clinton in 1997. (One, Vernon Baker, was still alive to accept his award in person.) As for Fox, his medal was accepted by his widow, Arlene Marrow.